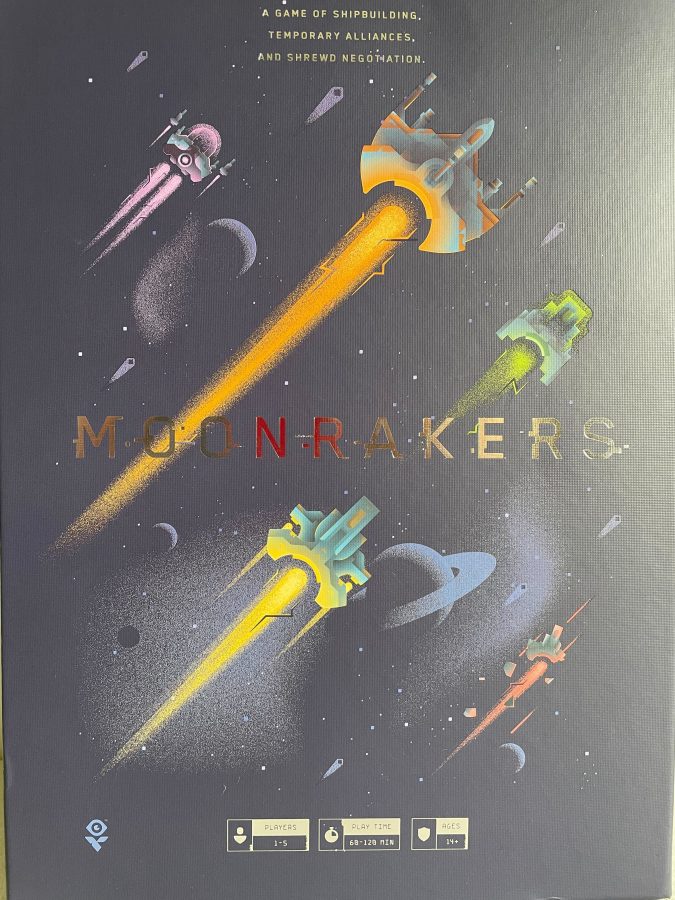 Moonrakers is a deckbuilding game where players try to complete Contracts, upgrade their ships, and level up their Prestige to 10 before anyone else to be crowned the leader of the Moonrakers, a ragtag group of survivors that were kicked out of polite society years ago. Players will also be able to ask for help and negotiate terms of said help, dictating everything from who gets the spoils to who attempts the Hazards. So is it a space-walk in the park or just another game shuffling cards in space? Read on for the review!

Damage, Players, and other Hazards

Players take damage from Hazard dice; if a Hazard isn’t blocked by a Shield card or ability then the player taking the damage loses Prestige per Hazard taken. Multiplayer warning: just like online game interactions aren’t governed by the ESRB, there’s no telling what will happen when you start playing with other humans. Players are encouraged to seek help early on in the game when everyone is weak, but it is pointed out in the game manual itself that someone who allies with you does not have to hold up their end of the bargain. In other words, you can totally lie, and there’s even an objective to partake in a Contract that fails – it’s called Saboteur!

Moonrakers feels like the video game FTL meets Clank!, with a bit of Catan haggling thrown in for good measure. As players grow in strength, gain upgrades, and crew, they will be more likely to be able to attempt easier Contracts, but early on you’re lucky to chain together enough actions to finish a zero-hazard escort mission. Each card you play has an effect and takes up an action; Reactors give you +2 actions, Thrusters give you +2 cards, Damage and Shields cause and prevent damage, and Miss cards just take up room and should be trashed as soon as possible. At the start of the game each player has 10 cards made up of a mix of these, and will get more through either completing Contracts or buying them. Each Contract rewards players with some combination of Prestige, Credits, Cards, and Hazards. Hazards are represented by the red bars at the bottom right corner of the card, and have to be rolled before any cards are played. If a player ever doesn’t want to attempt a Contract on their active turn, they can instead stay at base, gaining 1 Credit, a new Objective card, and they can replace one available Contract.

Whether a Contract is attempted, completed, or the player stays at base, they then can move to the Buying Phase, where players can buy Ship Parts or Crew Cards. Both are powerful upgrades, but Ship Parts are especially helpful early on because they also provide additional base cards. A Player can buy as many things as they have the Credits for: Ship Parts are immediately installed on the ship, and Hired Crew are added to the player’s discard pile.

I love how being able to ally with the active player keeps everyone engaged – instead of looking at your phone or just planning your next turn, you need to pay attention to who’s going now, what’s in your hand, and if you want to help them. Anyone who allies with the active player will draw a new 5 cards at the end of the round, so it’s also a great way to cycle through your deck quickly. More than once we found ourselves saying, “Huh, I thought I just shuffled!” because we were moving through our decks so fast. Some Crew cards make it even easier, letting you search for specific cards or draw several cards and keep or play one of them. I will say that at higher player counts, games take a lot longer as each active player considers their options of Contracts, Ship Parts, and Crew, not to mention the haggling.

The production value on Moonrakers is incredible. Metal coins, thick player boards, 5 ships with not only different colors but shapes and attachments making each of them look unique, and the Armory and Dispatch boards are easy to read and intuitive at a glance, as well as being glossy and cool. Also, the game manual is easily understood and even has a link to a great how to play video.

Gameplay in Moonrakers feels a lot like Clank!, especially when you have all but one card that you need so you try it anyways and play a Thruster and then boom! There’s the extra Shield card you needed to finish that big Contract. Choosing between relying on temporary allies and pressing your luck with your deck is a big push/pull in the gameplay, but it’s oh-so-great when it pays off in your favor. Luckily the worst that can happen if you fail a mission is the Hazard dice knocking you down a peg or three on the Prestige track, but that’s what Shields are for. If you’re a fan of space-faring deck building games like Star Realms or Clank! In Space! but wished they had more players or player interaction, you should absolutely check out Moonrakers.

If you’re a fan of space-faring deck building games like Star Realms or Clank! In Space! but wished they had more players or player interaction, you should absolutely check out Moonrakers.