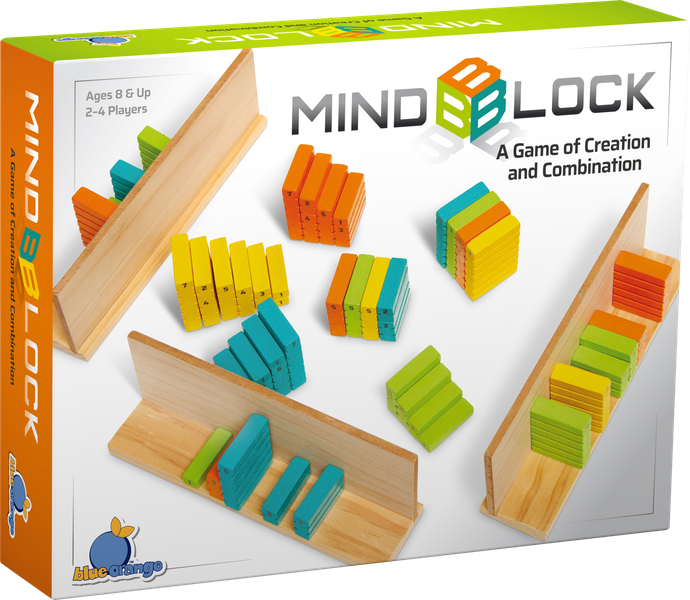 MindBlock is a game in the style of the classic Rummikub. Rather than using tiles or cards like most rummy games, however, it uses chunky wooden blocks in various colors and heights. The interesting twist of MindBlock is that players can combine multiple, like-colored blocks to make a higher number.

MindBlock is a rummy-style game with a 3-dimensional spin. Using traditional rummy rules, players try to be the first to clear their tableau of all blocks by melding them into like-colored runs and differently-colored sets. The winner is the first player who can play all their blocks.

To begin the game, each player receives a tableau of 7 wooden blocks.

Because the blocks come in a variety of sizes, any time a player needs to draw one (including during setup), the player to her right draws it for her. This prevents players from “fishing” for a certain size in the draw bag.

On the first turn, each player checks to see whether she can meld 15 points’ worth of blocks. A meld can consist of either:

If a player can meld 15 or more points, she may place her melds in the middle, visible to all. Herein lies the game’s twist: players may combine multiple, smaller blocks of a single color to make a larger block. To continue the example above:

At first glance, the player’s starting tableau did not seem to have any sequences or sets of blocks with which to make melds. However, by combining the yellow 2 and 5, she can make a yellow 7, which can, in turn, be combined with the other 7’s to make a meld.

If a player cannot meld at least 15 points of blocks on her first turn, her neighbor draws an additional block for her tableau. On all following turns, each player must either play a meld or add blocks to the center. Players are free to move and rearrange blocks on the table in order to make room for their own, but at the end of every turn, all blocks in the center must be part of a meld – that is, there cannot be any leftover, “hanging” blocks. In the event that a player can neither play a meld nor add blocks, her neighbor draws another block for her.

The first player to play all their blocks wins!

Before I give my opinion of MindBlock, I should say that rummy-style games are generally not my thing. I think games like Five Crowns and Rummikub are fine, but I don’t LOVE them.

With that grain of salt in mind, my opinion of this game is middling. MindBlock’s twist of combining numbers is certainly clever – something I have not seen in any other rummy game – but at the end of the day, it still wasn’t for me. I suppose I just don’t find much excitement in this genre’s style of gameplay. Of course, that’s not an issue with this particular game, but rather my own predisposition to the entire rummy family.

Still, MindBlock’s production is quite nice; its wooden components give it a pleasing, tactile quality. (I’m slightly ashamed to admit it, but when I first opened the game, I spent 20-some minutes just playing with the pieces…) Everything fits nicely back in the box, and the bag gives it some portability.

This game has a shorter playtime than Rummikub, and it does away with that game’s wonky scoring system (thank goodness). In fact, MindBlock has no scoring at all; it is simply win or lose, which feels cleaner, design-wise.

Overall, though, MindBlock is a rare instance of a Blue Orange game that I did not immediately love. I know a lot of people who enjoy rummy games (my own family, for example), and to those people, I would definitely recommend giving it a try. It does something really cool that I have never seen in another game of this type. However, if like me, you are lukewarm on the genre, this may be one to pass on. (Pro tip: Get Slide Quest instead! It’s the best game of 2019!)