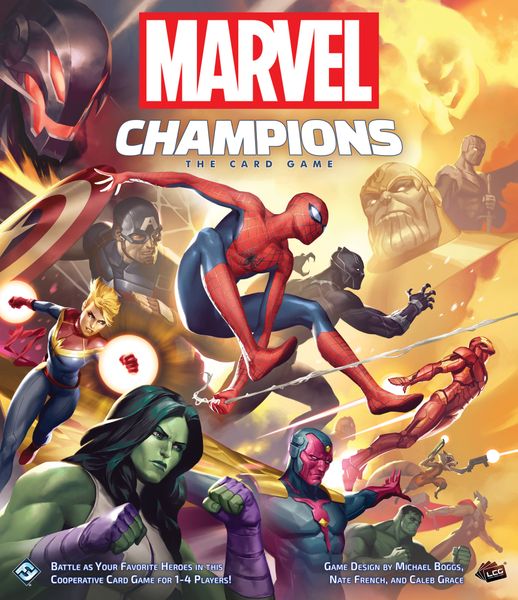 Marvel Champions puts players in the shoes of Spider-Man, Captain Marvel, Iron-Man, She-Hulk, or Black Panther and pits them against the likes of Rhino, Klaw, and Ultron. You’ll have to cooperate with your fellow heroes and work together to take down foes and keep them from advancing their nefarious schemes, in all their forms. Avengers (whisper voice) assemble!

Players will attack enemies to defeat them, and both the cards and rule books have many images of comic book characters fighting, charging, and attacking. No gore is shown, and only two cards that I could find have any blood (and it is very minimal).

A few of the cards feature female heroes and villains in skin-tight or skimpy outfits. Titania, whose outfit is open from neck to navel, appears on page 13 of the rule book as well as in card form. Most of the rest of them don’t appear to be intentionally gratuitous (Spider-Woman’s ally card has an odd back-breaking pose).

Marvel Champions lets players fill the boots or spandex of their favorite Marvel characters – assuming their favorites are among the five included in the box. The base game comes with the five heroes previously mentioned, as well as the villains Rhino, Klaw, and Ultron. Rhino isn’t known to be much of a thinker, so his robbery is just a straightforward smash-and-grab, represented by only having one scheme card. Klaw has more nuance, which is apparent from his available side-schemes and two main ones. Ultron is the hardiest foe in the game, with multiple schemes and side-schemes, as well as the ability to take cards from the heroes’ deck and turn them into his drones to attack players with. So kudos to the designers for incorporating the theme with the enemy difficulty. And while I appreciate the diverse enemy pool, I was surprised they didn’t include a different big bad, considering the current finishing run of the Marvel Cinematic Universe (plus he’s on the box of the game).

Initially I was a bit put off by the range of art styles present in She-Hulk’s deck, but like many comic book characters she’s had several different artists in her books, even in recent years; keeping that in mind helped.

Games of Marvel Champions are played out over two phases, a Player Phase and a Villain Phase. During the Player Phase each player in turn can do as many things as they want in any order, as long as they have the cards and resources to do so. They can change from hero to alter-ego (or vice versa) once per turn, play any number of cards they have the resources for, Use their character’s card or an ally card in play, or Trigger an action card in play.

Players gain resources from cards in their hands, so it becomes a choice to either use a card to fuel others, play it, or save it for another round. Resources have four different flavors (mental, physical, energy, wild) but can be used to power any card. Some cards will provide bonuses when they’re powered by specific resources, or might require a specific resource once they’re in a player’s tableau. Most of the cards are fairly well-balanced, save for Spider-Man’s “Swinging Web Kick,” which for only 3 resources deals out 8 damage. For comparison, Spidey only has 10 hit points himself. Player cards have 1-2 resources on them each.

The Villain phase is more nuanced, partly because it depends on if the heroes are in hero form or in their alter-ego form. First, players place a threat token on the main villain scheme (once the scheme reaches it’s threat goal the scheme succeeds), then the villain activates. If the heroes are flipped to their hero side, the villain attacks – if on their alter-ego side, the villain schemes. Next, each player takes a card from the villain deck as an encounter – it could be a minion, treachery (one time threat), attachment (villain upgrade), or side scheme. Side schemes can distract the heroes by making them face the side-scheme first, or adding threat to the main scheme, or even adding encounter cards to the villain phase.

Overall it doesn’t sound too hard to do, but I guess I’m too used to Arkham Horror style games where the villain phase is just flipping over one card and reading it – in Marvel Champions you have to be aware of any and all scheme cards that the villain has in play, as well as what mode your character is in (hero or alter-ego) and any minions in play. Also, since the game relies on heroes having an alter-ego, I wonder what this will mean for Marvel characters who don’t have a secret identity. At the end of the day, it’s not a very weighty game, but it feels like a lot to keep track of, and the 24-page rule book and 24-page rules reference do little to dissuade that feeling.

It would be great if any or all of these allies were playable heroes on down the line. Also, Hulk’s special “ability” is hilariously on-point for the big guy.

I also felt a little disappointed that only Spider-Man and Captain Marvel were ready to play on opening the box. If you want to play as Black Panther, Iron Man, or She-Hulk you’ll have to build their decks first. They included plenty of cards so you can do just that, and even give you lists of suggestions to use, but I really hoped that all five would be ready to fight after breaking the cellophane. Another consideration for some will be the price point: $60 is not too bad, but usually a game in that range includes minis and dice and a few other things, not just cards and chits. So part of me is left wondering if the Marvel name brand is part of what players are paying for.

If the price is right, however, you have the potential to get many Marvel adventures out of Marvel Champions. Building decks, finding the best team-ups, trying to keep Ultron from destroying the world (again) – all in a day’s work for these Heroes for Hire.

A review copy was generously provided by the publisher.