Review – Marco Polo II: In the Service of the Khan 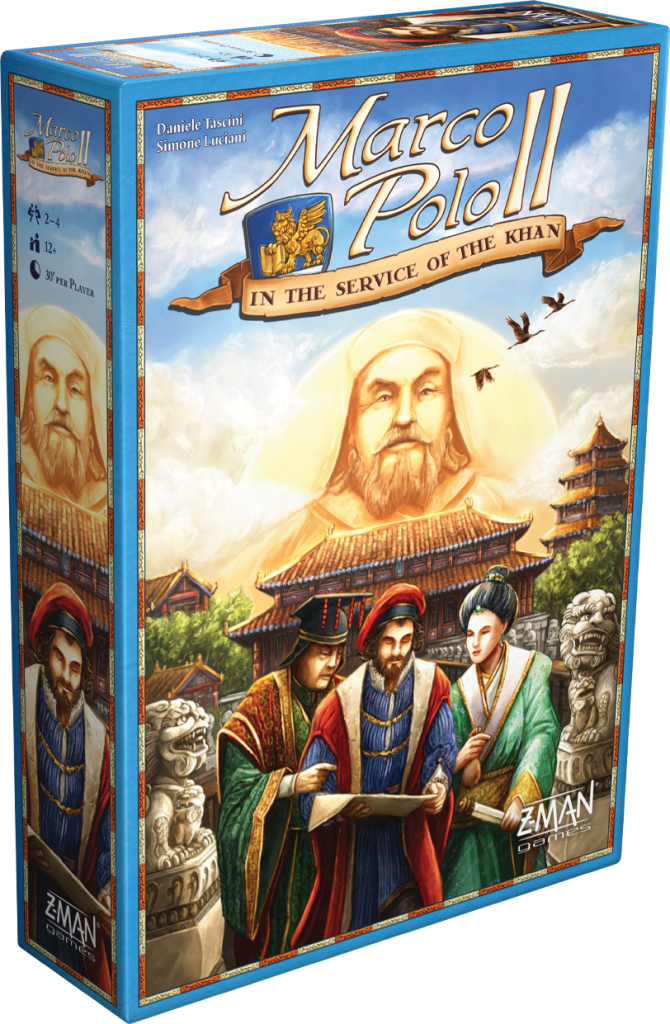 For a long time, there has been a contingent of French board game designers making a large impact on the industry: Bruno Cathala and Antoine Bauza have both won the Spiel des Jahres; Bruno Faidutti was nominated for it; Ludovic Maublanc, Serge Laget, and others have contributed to a variety of successul designs. The key thing I notice about this group is a high degree of collaboration; many of their titles are co-designs. Recently, a group of Italian designers has risen to the same level of notoriety, and at the forefront are frequent partners Simone Luciani and Daniele Tascini, who worked together on Tzolk’in: The Mayan Calendar and of course, The Voyages of Marco Polo.

Marco Polo II: In the Service of the Khan is an iteration on the design of Marco Polo; the core elements are nearly identical, but there have been so many small tweaks that the game is definitely its own beast. But is it better? Let’s take a look!

When I first read the rulebook to Marco Polo II, I was rather amused. There is a section at the beginning that says, “Hey, if you’ve already played The Voyages of Marco Polo, then you only need to read the sections with this particular icon. That’s the new stuff. The rest is the same!” That sounds great, except that most of the rulebook has the icon! And that’s an accurate represetation of what’s different: everything, but just slightly. This review will mostly focus on the differences, and how Marco Polo II is better or worse for it (spoiler: better). But it’s not enough to change anyone’s mind about Marco Polo or modern Eurogames in general.

Marco Polo II introduces a variety of new things, and in fact, a few too many. There are now “Guild Seals” that can require dice to acquire and then resources to activate. Activated seals give continual bonuses, and having a seal is sometimes require to travel along the main map. The end-game bonus cards also give points for activating certain seals. To me, Marco Polo II is a lot like a second edition, which I see as a chance to remove clutter; the Guild Seals aren’t particularly interesting and don’t “thread” themselves into the rest of the mechanisms without some forcing. I like the idea of icons required for traveling, but that could have been done elsewhere (certain contracts, for example).

The other superfluous new items are the two action spaces that change from round to round, but offer extra places to place dice. Between all the other actions possible in this game, including the ones opened by traveling, we often just forgot they were even available as an option. They don’t really issues by being present, but it just seems like… glut. These could have been incorporated by making the action spaces on some of the cities be variable, instead, for example.

On the other hand, there are some changes I really like. There is a new resource called jade, which can also be used as a camel or a coin, making it an incredibly valuable resource, but I didn’t find it particularly scarce. In fact, overall, I felt it was much easier to just have resources in this game than the original, which was nice (more on this in a moment). There is now a significant endgame bonus for visiting cities with different icons, and this bonsu is furthered by completing your hidden goal card. This is a simple, clean concept that I like, but it also seems redundant on top of the 15 points for placing all of your outposts.

The main, main difference between Marco Polo II and its predecessor is traveling. In the original game, traveling was extremely expensive and difficult, and wasn’t necessary. It was possible to be competitive simply by completing contracts with resources and ignoring traveling altogether. Kind of a bad look for a game called The Voyages of Marco Polo. This was actually my main complaint with the game: traveling was just frustrating and prohibitive. The designers apparently agreed, because they’ve changed things significantly.

The first and most obvious change to traveling is that the costs are more reasonable. In the original, costs were always coins and camels, but often very high coin values. Now, guild seals and Jade are occasionally required, and the gold requirements are lower. It also seems overall like it’s just easier to amass a pile of stuff, so that you can make big moves on the map without as much pain. And as mentioned above, traveling is now “doubly” rewarded by endgame bonuses, and significantly so.

However, the largest change is that contracts are now tied to specific cities on the map. You can no longer avoid traveling and just take contracts, because you can’t even get contracts until you put an outpost in cities that offer them. At first, I thought this felt forced; I guess I have to travel now, I grumbled. Yet because of all the other alterations — traveling actually feels reasonable now, most importantly — I was fine with this change. Actually, I think it’s an extreme improvement, when I was skeptical before. I’ve written many times about how Stefan Feld (the archetypical Eurogame designer) is much more successful when his designs are more integrative; here we see Tascini and Luciani move Marco Polo from disjointed pieces to a cohesive whole. It all just flows together more naturally, and feels smoother. The whole game is better for it. I would never play the original over this one voluntarily.

There are cosmetic changes as well. The new iconography isn’t especially natural, but it’s fine. The big new upgrade is that the wooden resource pieces are much better. In particular, the components that count as three of one resource (e.g. the bigger camels) are far larger and more distinct from their counterparts. Of course, this is offset by a crazy high MSRP of $69.99; you had better be a true Eurogame lover to shell out for this one, because that’s what this is. This isn’t the game to change anyone’s mind about the genre; there’s a reason I brought up Mr. Feld a little earlier. This as standard of a Eurogame as you can get, but iteration has provided it a natural smoothness of play that was missing before, and is often missing even in highly regarded games.

While some of the new changes feel a little unnecessary, the big changes in Marco Polo II are vast improvements over the original game. If you enjoyed the original, or just like heavy Eurogames, put this on your wishlist.

Thank you to Asmodee North America for providing a review copy of Marco Polo II: Service of the Khan.