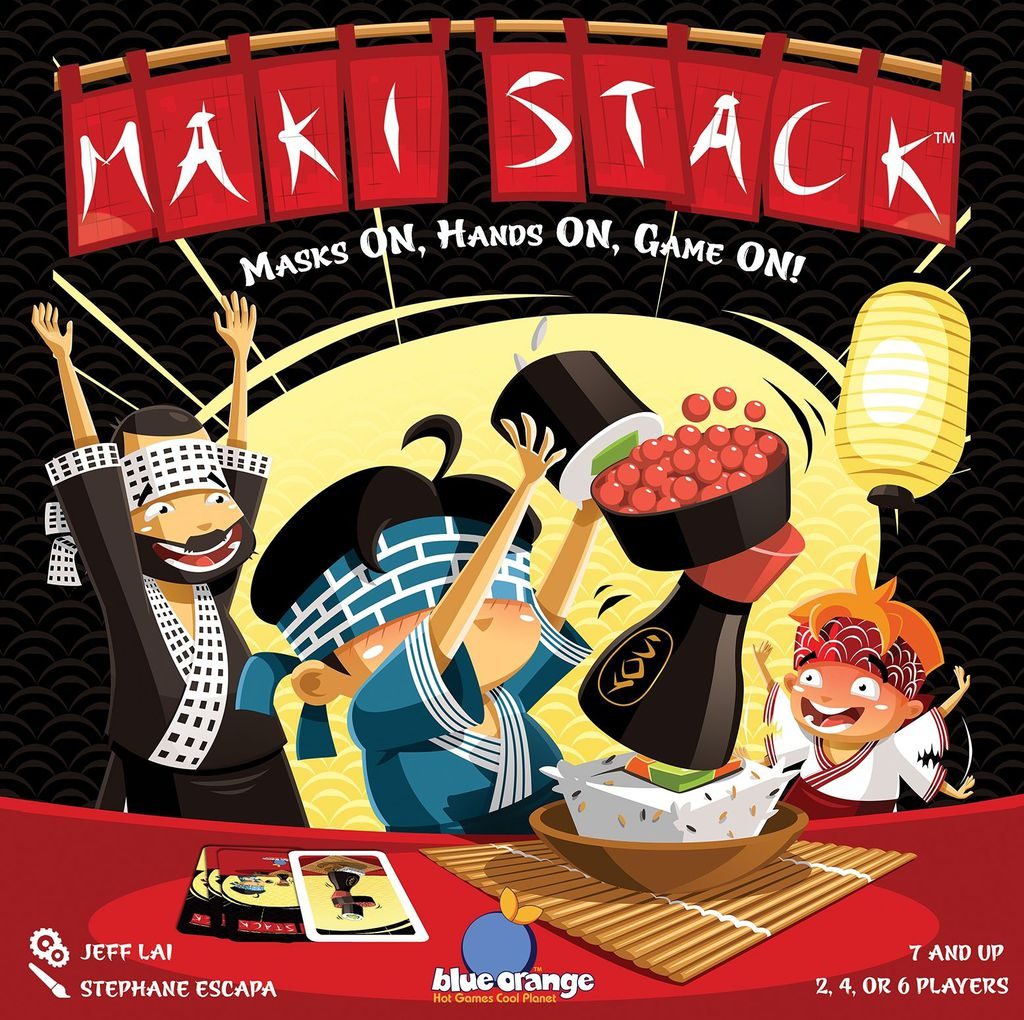 Maki Stack is a speed/dexterity game from Blue Orange Games, in which two teams of players compete to stack sushi, plates, and bottles of soy sauce. The catch is that players will either have to wear a blindfold or work with a teammate to pick up and stack the pieces using only one finger each. This is a great game for families.

Blue Orange Games’ new dexterity release Maki Stack tests players’ mastery of the sushi-arts. To prove their worthiness as purveyors of fishy dishes, they must stack the delectable delights quickly, perhaps blindfolded. (I really want to believe this is what students do in culinary school.)

Maki Stack includes amazing wooden components in the shapes of plates, soy sauce bottles, and three different kinds of sushi. Both teams receive a set of these pieces, along with a blindfold and a “sushi mat” tile. To begin the game, a deck of cards is placed in the middle of the table, from which a new challenge will be drawn each turn. The backs of the cards indicate one of two modes of play, either “mask mode” or “chopstick mode,” and the fronts depict a set of the sushi components, stacked in a unique order/orientation.

If the top card of the deck indicates mask mode, one player from each team must put on a blindfold before the card is revealed. Then, the card is flipped, and the blinded players’ teammates must verbally guide them to build the illustrated structure. Whichever team completes the stack first wins the round and receives the card.

If the top card indicates chopstick mode, two players from each team are chosen to build the structure together; the catch is that each player may only use one finger to do so. Again, the first team to complete the structure wins the round and the card.

The components are some of the best I’ve ever seen; it was all I could do to keep myself from biting into the wooden sushi roll. [Author’s note: wooden sushi < real sushi] The blindfolds are thick foam with an elastic band. They seem like they will hold up well over many games, as long as players don’t abuse them too much. The oversized cards are laid out nicely, with attractive, cartoonish art. All in all, Maki Stack‘s production is top-notch.

It goes without saying that this game is not to be taken too seriously. As is the case with many Blue Orange games, it is all about the experience and the humor. Maki Stack falls squarely into the family/kids game category, though I think younger children may have some difficult playing the “full” game. Stacking without sight requires some fine-tuned motor skills, so parents of junior gamers may want to substitute the blindfold for some other challenge, like chopstick mode, using the non-dominant hand, etc. The success or failure of this game with adult groups will, of course, depend on their preference. It’s goofy, it’s light, but it’s a nice brain break after a rousing round of Power Grid.

Maki Stack is a fun little game. Do note, however, that showing off your newfound stacking skills at your local sushi restaurant may get you kicked out. (I learned this the hard way.)