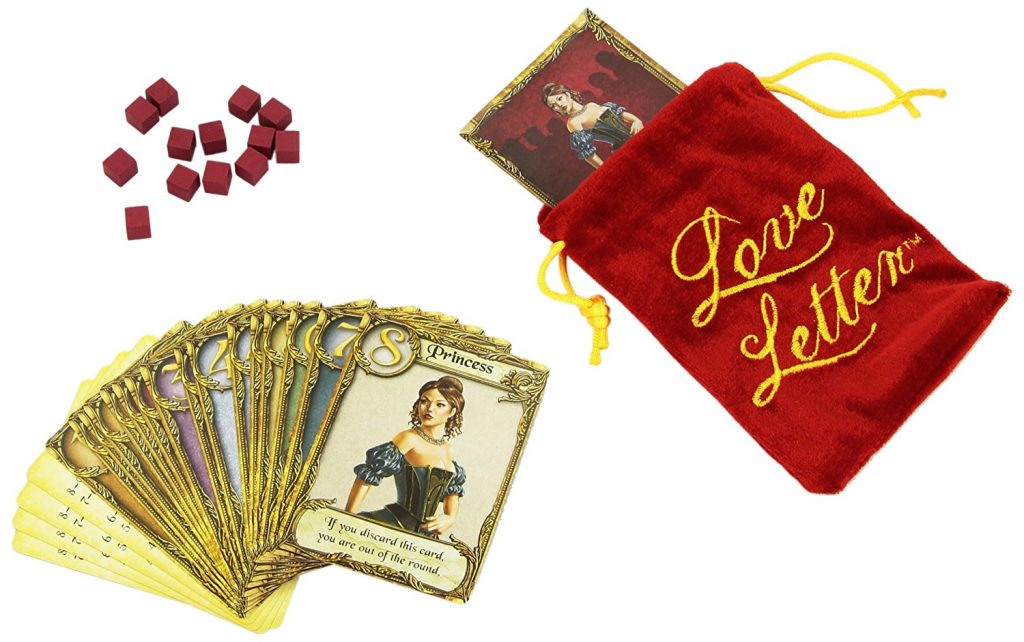 We’ve all had it happen. Traffic is backed up for our friends, and we’re left waiting for players to show up to game night. Still, those of us who have arrived are looking to kill some time until the entire group arrives. In those situations, “microgames” truly save the day! When it comes to finding the right one to bring along, there are a few considerations: size and portability, playing time, and player count, are among other personal considerations. This brings us to Love Letter, the Renaissance-themed deduction card game from AEG that stems from their Tempest shared-world of games. It’s been around for the past several years. You may have seen it on the shelf or on a table at your local game store. Maybe you’ve seen it as an online recommendation for purchase. With microgame considerations in mind, I want to review the title from that view primarily and even see if it is a game that can make the jump to central focus on any given game night.

With sixteen cards to play with, there isn’t much room to make the game inappropriate. Granted, this game has had many licensed properties used as new skins for the game. For the purposes of this review, I am reviewing the original version, not every version available. Other versions may have gameplay variations and even inappropriate text/images for some audiences, but I’m not aware of them for the purposes of this review (even as I include card images from those various versions). By far, the original game is one of the safest games a person can pull out to play, as there is nothing inappropriate in it thematically, even as it focuses on courtship and romance. Also, while many deduction games double-down on deception tactics, this game does not.

Thematically, with Love Letter, we have a game that at first glance may not appeal to all. I will admit that the Renaissance theme was initially off-putting, but it did grow on me once I played it a while. That said, this is an experience that gains more from the gameplay than the theme necessarily grants it. In it, we focus on delivering letters of love to the princess each round; she is actually a card in the game herself, being the highest valued at 8. This letter delivery is done through the assistance of collaborators, which are on the face of the other cards. The last player standing in a round was able to deliver their love letter to the Princess by use of their one card, and quick, successive rounds are played until one player “delivers enough letters” to win the heart of the Princess. Alongside that Princess card, the game deck includes five Guards (valued at 1), two Priests/Spies (2), two Barons (3), two Handmaidens (4), two Princes (5), one King (6), and one Countess (7). While many card games involve managing an ever-growing hand of cards, the most any player has at any point in the game is two cards, but often players possess just one in their hand. How’s that for simplicity?

Each player is dealt a card at the beginning of the game, while an additional card is removed from the deck to avoid card-counting; depending on if the game is two players, additional cards are put to the side, face-up, to cull the deck for faster play. Because of this, I have found two-player to have its own flavor, compared to the full four. Still, regardless of the number of players, the game flow within turns stays the same. Each player on their turn draws a card from the deck and either plays that card or the one they had in their hand. Each character card has an effect, which includes spying on another player’s hand, initiating a hand swap or discard, or even forcing a player out of the round (yes, even that player potentially). Discarded cards are viewable to all players, but cards in players’ hands and the draw deck are unknown. This all culminates in making a fast-paced game of trying to force other players out of the round and hoping you yourself don’t get put out by another. If multiple players are still in upon the last draw card being drawn, the player holding the highest number card wins the round. Each round, the cards are reshuffled and distributed, as before. After a player wins the allotted number of rounds for the number of players (anywhere from three to seven), they win the game.

While there is a boxed edition of the game, most editions are made to fit within a small velvet bag, holding the following: sixteen character cards, four reference cards, and small “tokens of affection” (to keep track of who has won rounds). That’s it, and, yes, it all fits in the small bag, making it perfect for travel and slipping in one’s pocket for a quick lunch game. While the cards are sturdy enough, the stitching in the bags has given me pause to consider how well they will last for all players down the line, but this consideration is minor and shouldn’t dissuade anyone from purchasing. The ease-of-use and portability are some of the game’s biggest strengths, and they allow the game to transcend the aforementioned Renaissance theme, creating an easy-to-learn game that has mileage in its usage. The deduction mechanics are key to the game, and while similar games like Coup have almost a complete reliance on player deception and even outright dishonesty, this game hinges on players telling the truth as they play. Sometimes, the cards you draw work against you and almost seem to force you out, but never will you be forced to lie. That’s a huge plus for the game for many players uncomfortable with those aspects of many games.

Truth be told, the game may not be for everyone, because I’ve found some people like to have more intricacies going on in a game: more cards at play, more effects, and more length to rounds being played. Some want math to heavily focus with all their card games, and that really isn’t the case here. To any that these points might apply to, I would remind people that this is almost the epitome of the “microgame”, ideal for shorter play sessions. I could see some groups playing this in extended sessions all night, but I would say that some players might tire of an entire evening of round-after-round games. I believe this game is ideal for playing one or two full games in an evening before moving on to another title. That is not meant to denigrate anything about this title, but rather, I say it to highlight the game’s biggest strength: deduction mechanics with little set-up and quick gameplay. Those alone should give this game high standing for almost any set of players out there. 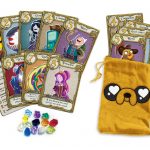 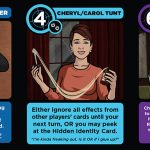 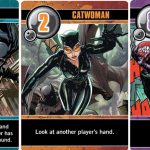 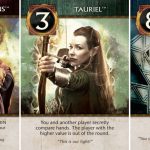 Love Letter: The Hobbit – The Battle of the Five Armies 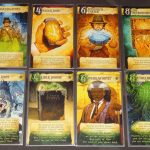 All-in-all, Love Letter is a game that I see attracting more of an audience over time. It won several awards for the original version over the first years of existence, and in subsequent years, it has been “reskinned” and even re-purposed in some cases with various properties, including (but not limited to) Batman, The Hobbit, Adventure Time, Archer, and even H.P. Lovecraft; word is that there is even a Star Wars themed version in Russia. Beyond the pop-culture variants, there is a wedding-themed version and even a “Letters To Santa” Christmas version. Copies, depending on which version you want, can be below MSRP or much higher (supply and demand, you know). Recently, a digital version launched and is available on various platforms like Steam and the app stores. With all that in mind, it’s easy to see why so many are crazy about Love Letter. There is versatility to its gameplay that goes beyond the Renaissance theme (or whatever version you choose), so try not to discredit it (as I once did). Give it a whirl and who knows? You might find yourself still playing it by night’s end.