Hunt orcs, escape prison, and fight the undead in this full campaign for LotR TCG 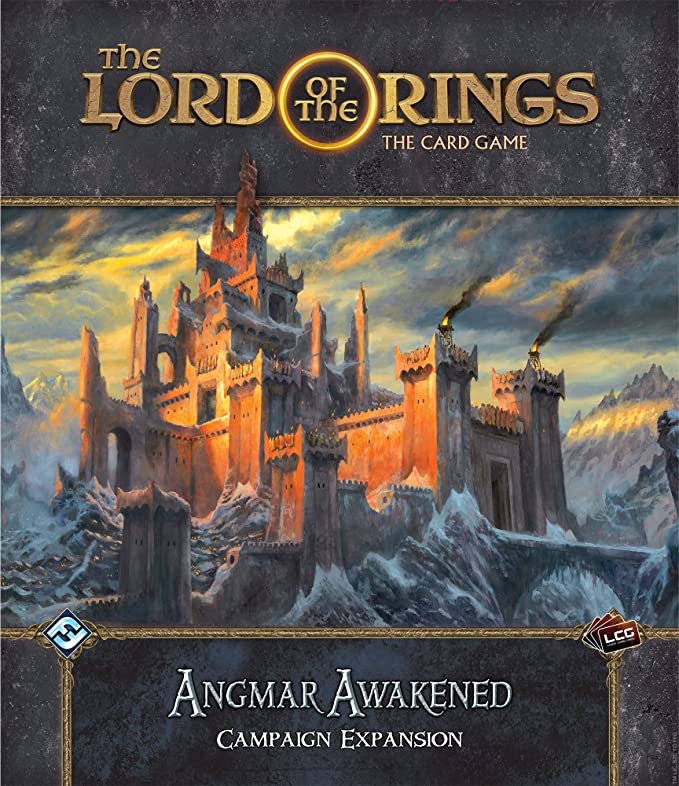 Some orcs and undead could be seen as disturbing/scary, and a few cards depict dead or dying humanoids, though no extensive violence is shown. If you’re cool with the Lord of the Rings movies, then you’ll be cool with this (slightly tamer) art.

First, the heroes. The new heroes are: Dori and Aragorn (tactics), Arwen and Merry (Spirit), Halbarad and Amarthiul (leadership), and Erestor and Rossiel (lore). The more interesting cards in this expansion largely focus on mechanics specific to the campaign (bonuses for lots of engaged enemies, side quests players can add which often grant boons when completed etc.).

A majority of the hero cards pertain specifically to Dunedain and elves, so if you enjoy using those heroes and you’d like to buff them, this could be a great expansion for you to snag. Ents make an appearance as allies here as well, and they are quite powerful, but you have to plan ahead because they enter play exhausted.

I like that the hero expansion gives you options to combine different spheres of influence in the pre-set decks. The 2 pre-set hero decks are Dunedain, which includes Amarthiul, Halbarad, and Aragorn (the ranger, not the one from the base game), and Elves, which includes Arwen, Eowyn, and Glorfindel. When building your deck for each mission, it’s always more helpful to have a variety of cards to choose from, even if you’re like me and end up putting over half of them in the, “Yeah, probably never gonna use this” stack. Therefore, this is by no means necessary, but it is fun. However, if you only plan on purchasing 1 of the Angmar Awakened expansions, choose the campaign expansion because it offers more gameplay, whereas the character expansion offers only more customization.

Second, the campaign. The overarching campaign story is excellent and intriguing. There’s 20+ pages of story that spans the 9 scenarios, not to mention the flavor text and additional story text on the cards (though most cards repeat phrases from the campaign story). The designers did an excellent job of taking the original scenarios from The Lost Realm and Angmar Awakened and creating an engaging story with them.

The scenarios themselves are largely interesting and varied. Without spoiling too much, expect a boss fight, seek-and-destroy type scenarios, a daring escape, and a fair number of undead who keep coming back. The difficulty of these scenarios range from 4-9 (out of 10), and it’s worth noting that each can be played on its own as a 1-shot if you’d rather not play through the entire campaign.

Some scenarios do a great job of manifesting the story into the gameplay… others, not so much. Even for some of the scenarios that do manifest the story well, they do so at the cost of gameplay. I’m not completely sold on the versatility of the basic system here. A game like Arkham Horror TCG, the obvious comparison, is much more versatile story-wise and gameplay-wise because of how much story happens on the cards. This provides for a better campaign experience for each scenario, even if it means that the scenarios themselves are less replayable. LOTR TCG suffers from the opposite: the scenarios, particularly the encounter deck, feature so much randomness that they’re wildly replayable, but it can be tough to squeeze a legitimate campaign out of them. Story writers Caleb Grace and MJ Newman wrote an excellent story, but I don’t think the campaign can deliver an experience on par with the story. However, the basic gameplay remains excellent.

While some encounter cards are essentially slight variations of what we saw in the core box, there are certainly some interesting ones here as well. A big new thing here is how many quest cards are in the encounter decks. Sometimes these present dilemmas because going for a non-main quest seems wasteful, but often the quests are either so helpful to the forces of evil or their once-completed reward is so tantalizing that it becomes a legitimate debate instead of a “how long can we last without committing to this quest?”

As usual, the cards are of fine stock and the art lives up to its award-winning standards. A couple times a game I’d find myself appreciating the card art instead of planning my next turn. It’s that good. However, I am disappointed in the box. They could have made this much smaller, but instead they reused the same box and insert as the base game. If they wanted to reuse the same box size and box insert, they could have at least included dividers, etc. to make things more manageable (I used my own blocks, pictured below). As it stands, the box is barely half full, even with all the content from the campaign expansion and the hero expansion combined.

As a campaign, Angmar Awakened Campaign Expansion falls short of its well-written and well-plotted story. It’s still good, it’s just not great. As a game, it’s excellent, and still a favorite solo game of mine. Expect plenty of challenges and adventure along the way (remember, this is a difficult game to beat, which I appreciate). Arkham Horror: TCG is still a better campaign, but I think LOTR: TCG is a better game, despite my persistent qualms with having a 50-card deck minimum (why do I need to choose that many cards when I won’t even see half of them??). If you like LOTR: TCG, and you want more of it, the campaign expansion is a no-brainer. The character expansion has some fun cards, but it’s certainly not necessary.

Character expansion is fun, but not entirely necessary. If you like and want more of LOTR: TCG, the campaign expansion is a no-brainer.