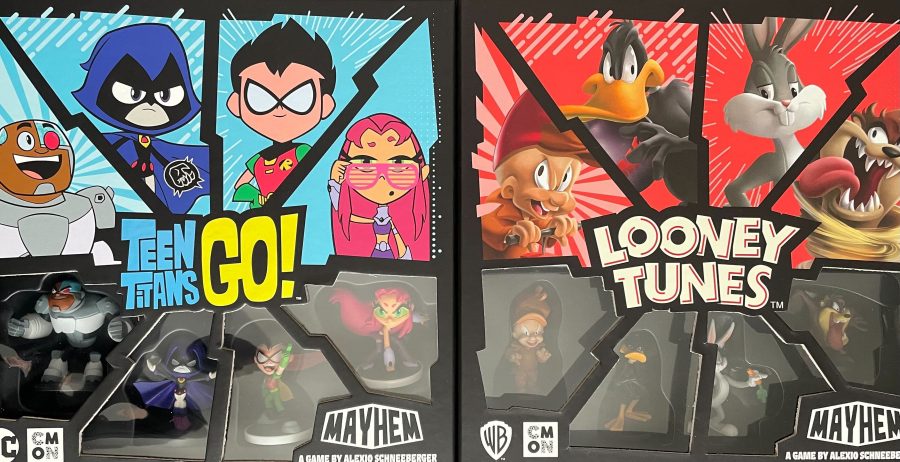 In each of the Mayhem games, players will choose 2 characters and duke it out over several rounds to see who can obtain 5 Victory Points first through KOs, completing missions, and activating specific events on the game tiles. Players will maneuver and strategize to place themselves in the best positions, but it also takes a bit of luck with the dice rolls to beat your opponent. So is it a wild and wacky trip worth taking, or just a slow roll out the door? Read on for the review!

Players can attack enemies and each other, dealing damage in the form of small hearts representing hit points lost. They can also knock each other’s characters out, but they come back in the next round. In the Teen Titans GO! version, players can be set on fire by various effects (mostly Cyborg) which will cause them to take damage in the next round. The box says 10+ but it’s all done in such a kid-friendly way that I let my grade-schoolers play without reservations.

Each game starts the same, with players rolling their 2 dice. Whoever has the lower sum of dice gets the Initiative, and the job of rolling the Mayhem die, which determines how much damage attacks will do this round, and if there’s a star on the side rolled then Mayhem Effects from cards and abilities may be used this round. Players will then take turns placing 1 of their dice on one of their character’s 2 abilities, moving, and activating their selected ability. Some abilities have special effects that are only triggered with a high enough die roll, while others have additional effects available when the Mayhem die shows a star.

While there’s not a lot of differences in the 2 boxes, there’s enough that they’re not exactly cross compatible. You could do it, but it would have to be like a crossover episode where the Titans visit the Looney Tunes or vice versa. The different boxes also have different styles; the Looney Tunes score points primarily from KOs and activating certain tiles, where the Titans go on missions until they’re completed and then immediately draw a new one. It feels more thematic this way (of course the Looney Tunes are mostly trying to knock each other out), but I found myself getting more frustrated with the Looney Tunes version since it felt more chaotic and harder to get things done, where the Titans version you can KO opponents but there’s other enemies and goals to worry about.

It’s hard for me to put my finger on why these games didn’t click for me. It’s not that I hadn’t heard of or didn’t appreciate either the Looney Tunes or Teen Titans, but I think it’s that the game is a bit much for younger kids while at the same time being too simple and chaotic for someone used to a more adult strategy game. Moreover, like a lot of games that feature multiple characters, you kind of need to know how everyone’s powers work before you can really know what’s going on, so the first few games will be very learning-oriented.

Both games come with quality components, including 4 highly detailed and painted minis. The game looks great, even if the gameplay didn’t always fully stand up.  However, if there’s a young gamer who loves either of the IPs here, they could really like Mayhem a lot. As for me, it’s decent but not my favorite for a quick 2-4 player game.

Review copies were provided by the publisher.

There is, as promised, Mayhem. Whether you think it's fun or not might entirely depend on your age + how much you like Looney Tunes or Teen Titans...