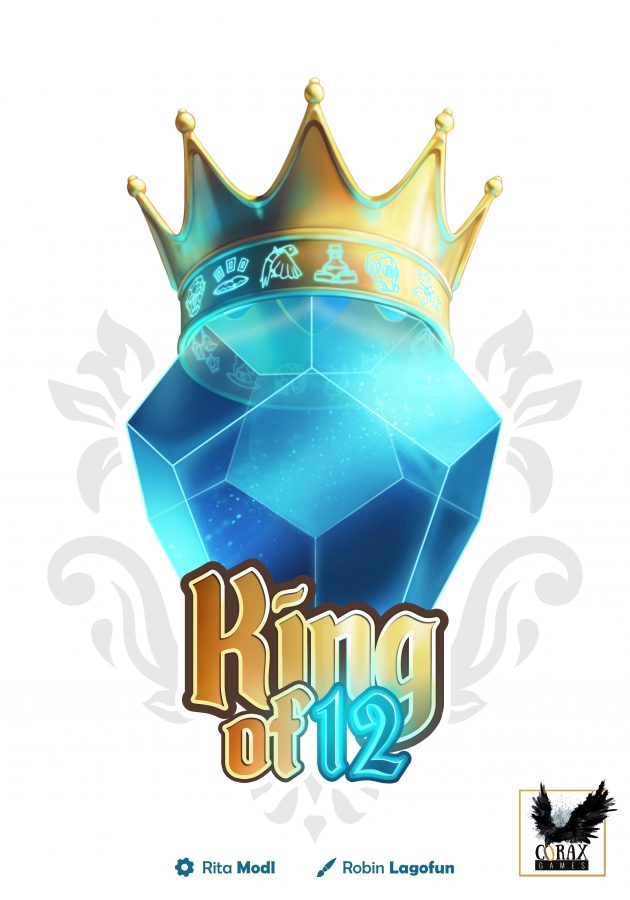 Over twenty years ago, Citadels was nominated for the Spiel des Jahres. Since then, the idea of “role selection” in games has seen many, many iterations, even helping create the genre of social deduction a decade later with games like Coup and Love Letter. Around that same time, the simple dice game Las Vegas also found itself nominated for the Spiel des Jahres, largely due to its unique tiebreak mechanism: players who are tied for first both lose, and the prize goes to whoever’s next in line. These two ideas come together in Rita Modl’s King of 12, a role selection game for 2-4 players. Is it any good?

One thing that sets King of 12 apart from many of its counterparts is the use of dice. Each player has a 12-sided die, and is trying to essentially get the high roll to win a turn. But after rolling the dice, players use their character cards (each selected secretly then revealed simultaneously) to alter everyone’s dice. This is where ties come in: if players pick the same card, it’s canceled. Then, if players have the same die roll, it’s canceled. Then, after several turns of this (until a player has 1 card left), players compare points earned from the rounds, and if players have the same amount of points, it’s canceled. Someone wins the round; you win the game if you win two rounds.

It’s unclear to me if the excessive canceling is meant to create psychological mind games among players, or simply to cause chaos. Neither of these things are bad to have in a game, but in this situation it felt more like chaos. It felt like a game of Fluxx trying to be a game of Citadels or Coup. I never got a good sense of any psychology against the other players, no one ever was shouting “Ugh, I knew you were going to do that but I did this anyway…”, it was more like “Oh, you did that, too. Darn.” The chaos continues with the various “punishing” tiebreaks for the die rolls. The especially punishing one is tying at the end of the round for the same amount of points, which seems quite an arbitrary spot to continue the tiebreak rule. It makes sense that King of 12 only goes up to four players, as the chaos would be far beyond typical people’s tolerance with more. With four players, we found ourselves bumping into each other a lot, in ways that felt accidental (and therefore frustrating) but with only two or three players, it felt kind of… hollow?

There are far worse games I’ve played than King of 12 and I can appreciate what it is trying to do. However, the mind games I’m looking for in role selection games are much more interesting in its predecessors, and while the tiebreak rule works wonderfully in Las Vegas, I don’t find it particularly fun here. It is hard for me to give a high score when I know I would rather be playing any of several other games instead.

King of 12 mixes ideas from games like Citadels and Las Vegas, but doesn't come close to the pedigree of either one.