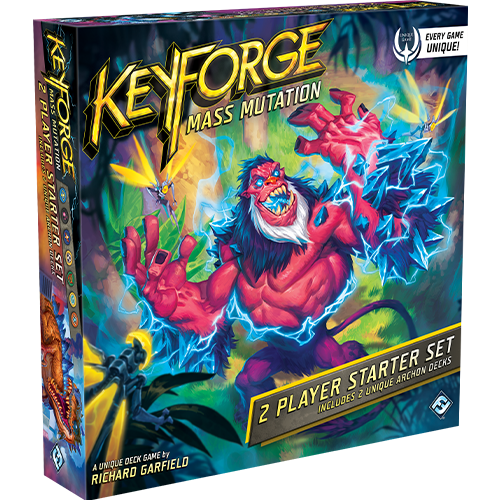 While KeyForge: Mass Mutation has some small changes, the formula remains the same to the last two releases in Richard Garfield’s unique-deck two-player game. Players will each bring one deck to the table, or a two-player set if they’re sharing, and take turns playing creatures, artifacts, upgrades, and actions until one of them manages to forge all three keys to win the game. No two decks are alike, but how does Mass Mutation measure up to past KeyForge releases?

Cards can be used to attack, defeat, destroy, ward, enrage, and purge other cards, but no blood or gore is shown.

Some of the houses use magic to attack, protect, summon, heal, and conjure for their side. Some Houses use witches, demons, and imps, while others use “good” magic like paladins.

Mass Mutation features a couple new things to the KeyForge game. Some are minor, such as new bonus icons in the upper-left corner, allowing players to gain or capture Ӕmber (I still dislike having to type that), cause damage, or draw a card. Also, some long-time players may recognize a few cards have undergone transformations, with new art and abilities and the keyword, “Mutant” under their name. Also new are Gigantic Creatures, which take up two cards and must be played together. Unfortunately, neither of my decks included a Gigantic Creature, so I can’t comment further on how they play out.

So already, one of my negative points still rings true: just because there’s new content doesn’t mean you’ll get it in any decks you buy. You’re still at the mercy of real-life random numbers and luck. But I did manage to get a good mix of 6 of the 7 current KeyForge Houses, including my first deck with the Saurian race. The Saurians were introduced when KeyForge: Worlds Collide came out last year and feature intelligent dinosaurs in Romanesque armor and architecture. The other houses in my decks were Logos, Untamed, Shadows, Star Alliance (the other new House from Worlds Collide), and Dis. And while they have many powerful cards and abilities, I hope that Dis get put on the back-burner after this rotation, mostly because they’re filled with demons, imps, and Diablo-type creatures and evils. They’re probably the least family-friendly House.

A shot of the back of the box, partly just so you can see a Gigantic creature.

With the small changes (Gigantic Creatures aside) you might think there isn’t much different with this iteration of KeyForge, but the enhanced cards with the extra icons in the top corner make for a much faster-paced game. Ӕmber changes hands often and at more than one point in my games I had to use damage tokens to stand in for piles of it. After playing a few games, one thing became very clear: I definitely had one deck that was stronger than the other. It wasn’t that the losing deck was inherently bad, just that the randomosity had not found a group of houses and cards that really clicked. Whereas the always-winning deck had abilities that moved Ӕmber around, stole it, or used it to shield friendly characters. I even wondered if that meant that the new decks were better.

They are. I took a very strong Brobnar-lead deck from Worlds Collide against my undefeated Star Alliance/Shadows/Dis Mass Mutation deck and stomped those Brobnar so hard they probably won’t be back in rotation for another year. My deck is an Ӕmber-building engine, and right after my opponent made the first key I almost had enough to forge all three. It was a quick game. With all the new icons, and potential for Gigantic backup, I don’t think past decks will stand much of a chance against Mass Mutation. This is both exciting and disappointing. Exciting for new fans, and fans of new content, but disappointing for any long-time fans who want to use decks from the beginning, or even recent releases. I also think that while the mutated cards are cool, if you don’t have any context or don’t remember them it makes little difference.

So who is this new version of KeyForge for? Both die-hard fans of the franchise and new players alike will find good things here, with the bonus to the former that they may notice old favorite cards with a new coat of paint. I’m disappointed that it seems to make older iterations less viable, but if you have fun with a certain deck there’s no reason to throw it away; you just may want to save it for playing against someone who has a deck from that same season. I’m also still not sure how the Gigantic characters will play out, but that just goes to show that you really don’t know what you might end up with. With Worlds Collide I didn’t get any Saurians in my decks, so it feels somewhat par for the course to be left wanting a bit more here. I may end up buying another deck or two to see if I can track one down, but the two-player sets come with everything you may need to play. If you’re looking for a good symmetrical two-player game, you could do a lot worse than KeyForge: Mass Mutation.