Review – Key to the Kingdom 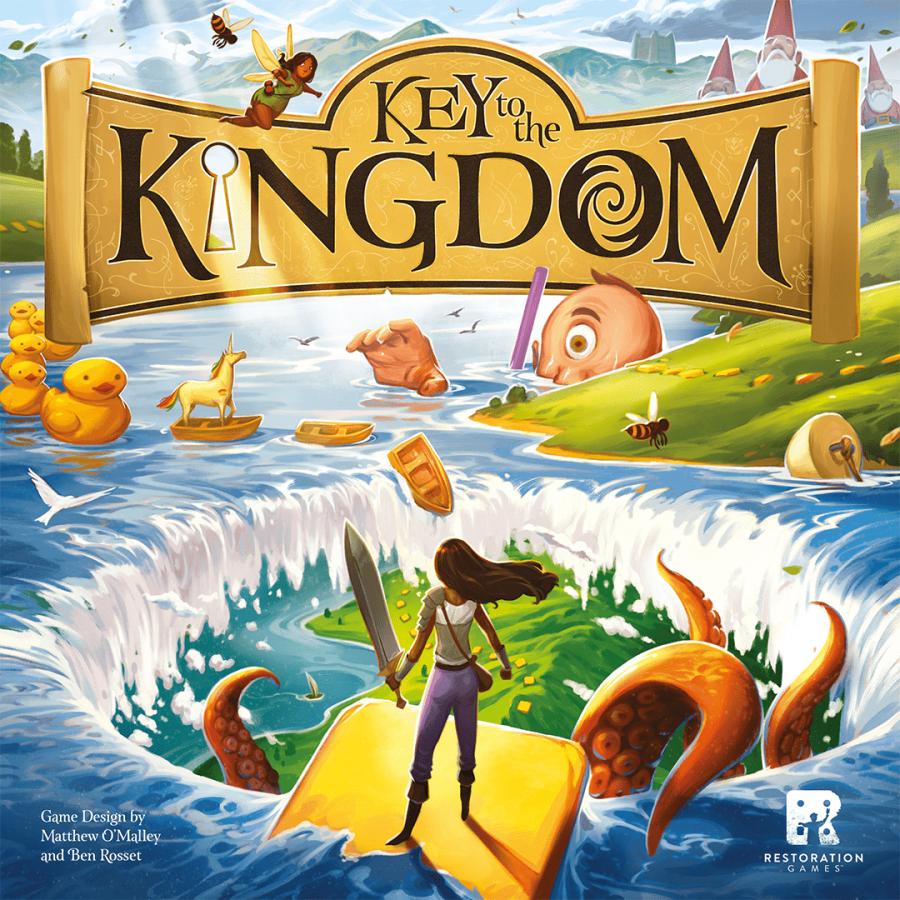 After more than 30 years, Key to the Kingdom is back in an all-new edition from Restoration Games. Get ready to traverse the land once more in search of the key… and prepare to face off against the Demon King!

First released in 1990, the original Key to the Kingdom is widely considered a classic of tabletop gaming. Restoration Games’ new version has—true to form for this publisher—taken the core ideas of the original game and redeveloped them for modern audiences.

The goal of the game is to complete adventures, which award pieces of the titular key. When a player has collected all 3 pieces, he or she can enter the Demon King’s lair for a final showdown. The first player to defeat the Demon King wins.

Just like the original version, the new Key to the Kingdom has a folding board which can open and close throughout the game. When a player enters a whirlpool space, that area of the board activates, opening or closing to reveal new terrain.

Each turn, the active player either rolls the die to move or skips their move to refresh spent items. When rolling, the player uses a d8 and moves the indicated number of spaces. Wherever they land, they resolve that space’s effect. Some spaces do nothing, but others might cause the player to draw an event card, refresh items they have used, trade their die for the powerful Demon Die, or go on an adventure.

Adventures are at the heart of the experience. Each one is like a dice minigame, and they all work differently. One adventure, for instance, requires the player to roll several times, getting a progressively higher result each time. Another requires alternating results of evens and odds, and so on and so on. Each adventure’s rules are outlined in the handy Adventure Atlas, which is easy to reference and does not slow down the pace of the game.

Now obviously, this game is heavily dice-driven, but players have a good deal of control over the randomness thanks to their items. Everyone starts with a set of items that allow them to modify their die rolls by adding or subtracting as many as 4 points. Items are helpful when going on adventures and absolutely critical when facing the Demon King.

Each time a player completes a colored adventure, they earn a key piece of the matching color (red, green, or blue). When a player has all 3 pieces, they can visit the final boss. To do this, they travel to a whirlpool and, instead of opening/closing the board as normal, they warp to the Demon King’s side board. Once there, they can initiate the final challenge, which requires several rolls of increasing difficulty. The fourth and final roll—against the King himself—requires a result of 20+, but luckily, players can use all their available items to assist. The first player to best the Demon King wins!

Key to the Kingdom is another quality release from Restoration Games. Just as this publisher did with other classics like Fireball Island and Stop Thief!, they have managed to update an old-school game while staying true to what made it memorable in the first place.

Just as the original was, the new Key to the Kingdom is geared toward kids and families. There are no two ways about it: this game is a total dice-fest. There is little in the way of meaningful strategy, but the overall experience is fun enough that it doesn’t seem to matter. Seeing the board transform before your eyes is super cool and cheering when an opponent’s showdown roll comes up short is great fun.

There are a couple of minor issues with the game. First, with a 20-minutes-per-player game length, playing with 4 or 5 people will take a while—much longer than I would wish to play. Second, the blank spaces are rather uninteresting, a fact that the rules even acknowledge, calling them “Boring Spaces.” I would have much preferred if every space had some kind of effect, even if it was as simple as “Refresh 1 item.” As it is, the event cards do not come out as frequently as I might have liked, so perhaps the blank spaces could have been event spaces instead?

On the whole, though, if you can see Key to the Kingdom for what it is—a silly, luck-heavy game for kids and families—it’s a good time. It feels like a nostalgic throwback, which is exactly what Restoration Games does best.

If you can see Key to the Kingdom for what it is—a silly, luck-heavy game for kids and families—it’s a good time. It feels like a nostalgic throwback, which is exactly what Restoration Games does best.