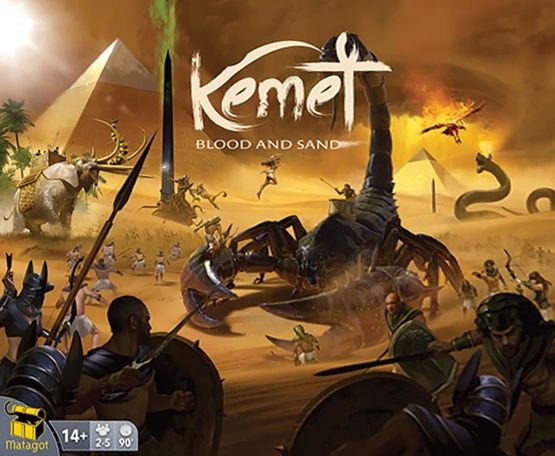 How about a story: back in the “before times,” in the crowded halls of Gen Con, I was introduced to a game called Kemet. But there was a long line for the demo, and the teacher’s solution was to annihilate the players receiving the demo as fast as possible. So, all I knew about Kemet coming into 2021 was that I sucked at it. But here we are with a brand new edition, promising upgraded components, gameplay fixes, and included expansion content.I can’t tell you much about whether it’s better than before, but instead let’s see if Kemet: Blood and Sand is just, well, good. Is it?

Kemet is a game about Egyptian gods battling each other using human troops and mythical monsters, so players who are averse to other religions should stay away. There is one Power Tile with an underdressed female, and several pieces of art show shirtless men. Of course, the game is also depicting violence on a grand scale.

One thing I do remember about the old version of Kemet was that it had an MSRP of $65.00, while this new version will run you $90. I know everything has gotten more expensive with COVID, and we’re talking almost a decade between these two versions, but it still feels steep. The question, then, is whether the new components are truly that level of “premium”. The short answer is no, but sadly they could have been.

The plastic miniatures, both for players and the monsters, are great. The cards are fine, with quality artwork and clear iconography. The recessed player boards are great, as are the trays for Power Tiles. The new pyramids look much nicer, though they are a bit fiddly. However, the board looks a bit dull, and their method for adjusting for player count is just nonsense. For some player counts, you use giant pieces of cardboard that look like sandstorms to block off regions, but for 3-player, for example, you just use half the board but have no real way to clearly mark the other half off. Why in the world is this board not double-sided!? The other problem is the rulebook, which is full of omissions, awkward phrases, and a general lack of clarity. I’m grateful that they have individual books for the player powers and divine intervention cards, but the rules should not have been this bad for a game that’s already had its rules heavily scrutinized for almost a decade. The game doesn’t look bad, but it could have been much better.

Maybe that’s forgivable if the gameplay is premium. Kemet: Blood and Sand is a very tightly designed game, and definitely one that promotes interaction and combat. I love how winning a battle is distinct from winning or losing troops, and the bluffing of the card-battle system always led to deliciously difficult decisions. For new players, revealing the 48 power tiles right from the start is overwhelming, but most are not immediately accessible, and several are repeated. By the end of the first game, we had those down without a problem. It always felt like you had several things you wanted to do and not enough time to be doing them, in a good way – decisions need to have tension to be interesting.

There are two things that keep Kemet: Blood and Sand from joining Blood Rage at the top of the “Eurotrash” pile. First, while this won’t be a negative for everyone, it is for me: the game is too chess-like. There is actually no randomness in the game apart from the Divine Intervention cards, of which there are not many different varieties. It is often quite possible to calculate what opponents are able to do or not do, and adjust accordingly. This might even be a good thing for some people, but for me, it sucks the drama out of the situation. Pulling a “watch this!” moment out of nowhere with something completely unexpected is what keeps me coming back to card-driven combat games, deckbuilders, and the like, and I don’t think Kemet can offer those very readily.

This lack of randomness leads to the far bigger issue with Kemet: Blood and Sand: even after three iterations on the endgame (including a 1.5 ruleset), it still has a “bash the leader” problem. You win if you begin the turn with 9 points or more and no one has more points than you, you win. At first, the game flows very quickly, with every player racking up points, but once somebody nears that threshold, and is going to win on their turn, it becomes a sequence of player B has to stop player C, and that puts player B set to win, so now player A has to stop player B, and so on. And because the game is so calculable, it’s clear what you have to do and everyone knows it. In one three player game, we spent an extra 25 minutes bashing each other only to end up at the same place we started from the previous round’s night phase, with the original “winner” finally truly winning. I’m not sure what the ideal endgame for Kemet is, but it’s not this, and it seems the designers still don’t know either.

Kemet is a good game with great ideas. But the endgame still isn’t quite there, and for anything less than perfection, that price tag is too hard to swallow.

Despite the flaws and price, Kemet is a solid "Eurotrash" wargame.