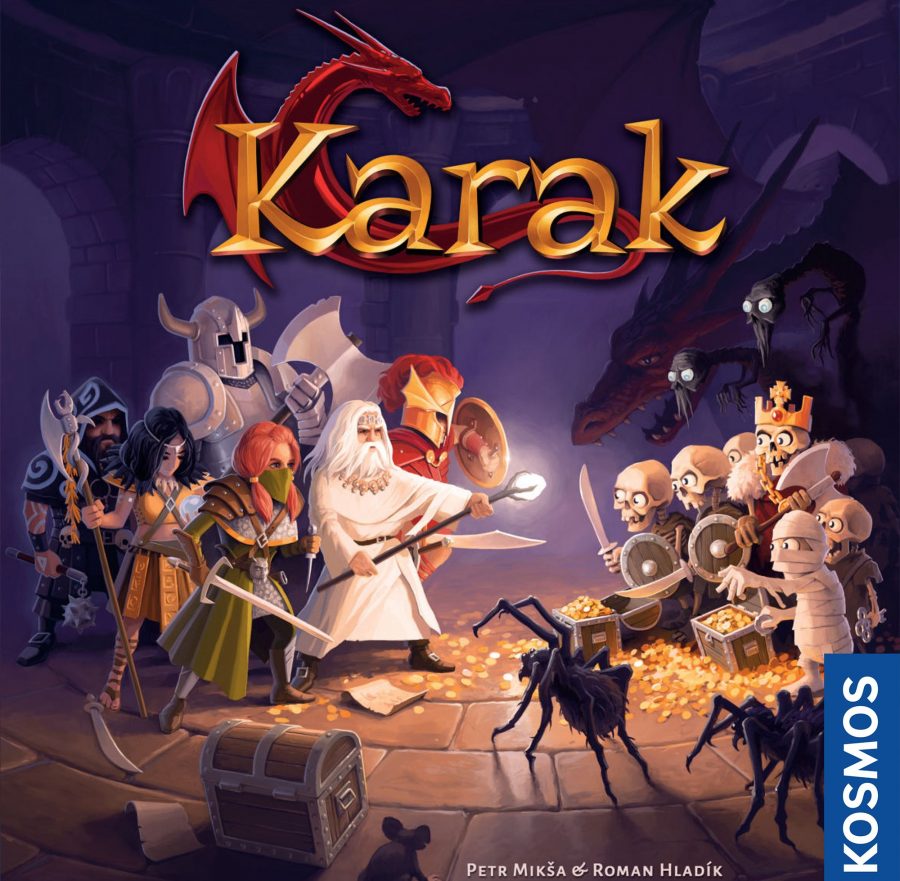 Karak is a highly accessible dungeon-crawl game. In it, players traverse through the murky depths of Karak castle, encountering monsters and searching for treasure. Ready for adventure? Grab your sword and let’s go!

In Karak, players are fantasy heroes in search of a treasure guarded by a fearsome dragon. Beginning at the entrance to the catacombs of Karak castle, players move throughout the labyrinth revealing new rooms and fighting baddies. The goal of the game is to collect the most valuable treasures.

Each player controls a character, which is represented by both a standee that moves throughout the dungeon and a tableau that tracks health, inventory, etc. The character standees start on the entrance tile.

On a player’s turn, they can move up to 4 spaces. Any time someone moves through a door with nothing on the other side, they reveal a tile and add it to the map. If this newly-discovered tile contains a room, the player draws a token from the bag and places it in the room. Tokens can either be treasure chests or monsters.

Opening a chest requires a key, and keys come from defeating certain enemies. Whenever a player encounters a monster, they must end their movement and fight it. Each monster has a strength value, which the player must exceed in order to defeat it.

Play continues in this manner, with players exploring the dungeon and fighting enemies, until someone defeats the dragon in combat. That player doesn’t automatically win, but they earn the dragon’s treasure, which is worth more than the other treasures. Once the dragon is slain, the player with the most points wins!

Karak takes the classic dungeon-crawl formula and distills it down to its barest essence. Gone is all the messy bookkeeping of range calculations, initiative orders, defensive bonuses, etc., and in its place is a set of streamlined rules that makes for a breezy dungeon delve.

This game is aimed at families, and it’s perfect for that audience. It strikes just the right balance of being simple enough for kids to understand, but fun enough to hold parents’ interest as well. Given its all-ages mentality, the decisions in Karak are very surface-level, so players should not expect deep strategy. What they should expect, though, is a lighthearted adventure that doesn’t take itself too seriously. Sure, the game can be a bit lucky given the amount of dice rolling, but that doesn’t bother me. The way I see it (and I suspect the way a kid would see it), the randomness of the dice helps the game to feel exciting and unpredictable.

The production quality of Karak is pretty standard, mostly just tiles and tokens. It’s nothing exceptional, but it doesn’t really need to be. That said, I do wish the tiles had a little more character to them; as it is they look quite bland (though I guess that fits the theme of a dreary dungeon?). The player boards are easy to read at a glance, thanks in large part to their intuitive iconography, and the art on the monster tokens is silly-spooky, just right for the audience. All in all, Karak’s production won’t wow anyone, but it works.

I enjoyed Karak, and I recommend it to parents trying to engender a love of board games in their kids. This one would make a good springboard into other dungeon crawl/exploration games. I wouldn’t suggest it for all-adult game groups, but if you have kids and grownups playing together, Karak will probably go over well. Check it out.

Karak is a great choice for groups where kids and adults play together. It is light enough for youngsters to grasp, but enjoyable enough to hold grownups' interest, as well. Recommended for parents trying to instill a love of gaming in their children.