Plan your climb and you might reach the top! 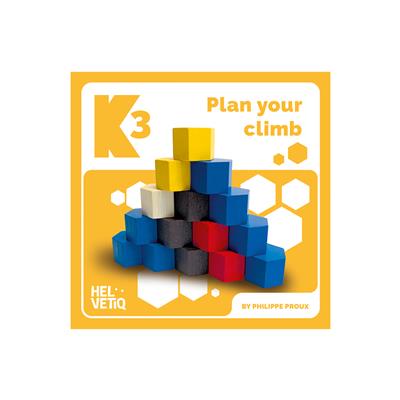 Scale the mighty K3 with careful planning and a little luck in this easy-to-learn game of strategic block placement.

To set up a game of K3, players will set up the mountain’s “base” with 9 blocks (actually hexagonal blocks but I’ll call them blocks). All the players will then pick blocks out of the bag and stack them to form a pyramid. First player to finish their pyramid goes first.

Players take turns placing blocks from the top of their pyramid onto the mountain K3. K3 is built/scaled in a pyramid shape so that each block is placed on top of 2 other blocks. In order to place a block, the block has to match at least 1 of the 2 blocks it’s being placed on. If you’re ever unable to place a block, you’re out of the game.

Designer Philippe Proux added a few wrinkles to the pick-a-block-place-a-block gameplay. I you place a block on 2 blocks of the same color, you incur a penalty in which an opponent can take a block from your pyramid and put it into a separate pile that they can play from at any time (instead of playing from the top of their pyramid). Each player also gets a white and a wood-colored block: the white block lets you skip your turn, and the wood-colored block is a wild you can place anywhere.

I really like the simplicity of K3. My wife and I could usually play 2-player games in around 10 minutes, so K3 made for a great filler or a “I want to play a game but I also want to go to sleep” game. There’s enough strategy here to be interesting without being analysis-paralysis inducing. The pieces are also fun to handle, and they remind me of games like Quarto.

The components are bare-bones, and that’s a good thing. The hexagonal cubes are a good mix of being tactile and not being too big. The box is cubical, and completely ditchable if you’d rather keep everything in the included bag. However, unlike Quirkle, you can store the bag with all the blocks in it inside the box without issue.

The major problem I have with K3 is that when you draw a bunch of red blocks for your pyramid and your opponent only has a few and the base of the mountain has none, you can be in serious trouble. Even if you use your wild blocks strategically, your statistical win percentage hovers around 10%. This can be remedied with home rules (everyone gets at least x of each color), but a quick, otherwise great filler like K3 shouldn’t need home rules.

You can play K3 with up to 4 players, but I had the most fun playing it with my wife as a low-stakes filler with plenty of “take that” opportunities. Check it out if you’re looking for something tactile, light, and strategic with some fun block-stacking.

K3 is a very solid family-friendly, filler game. It won't blow you away, but it's cute and fun.