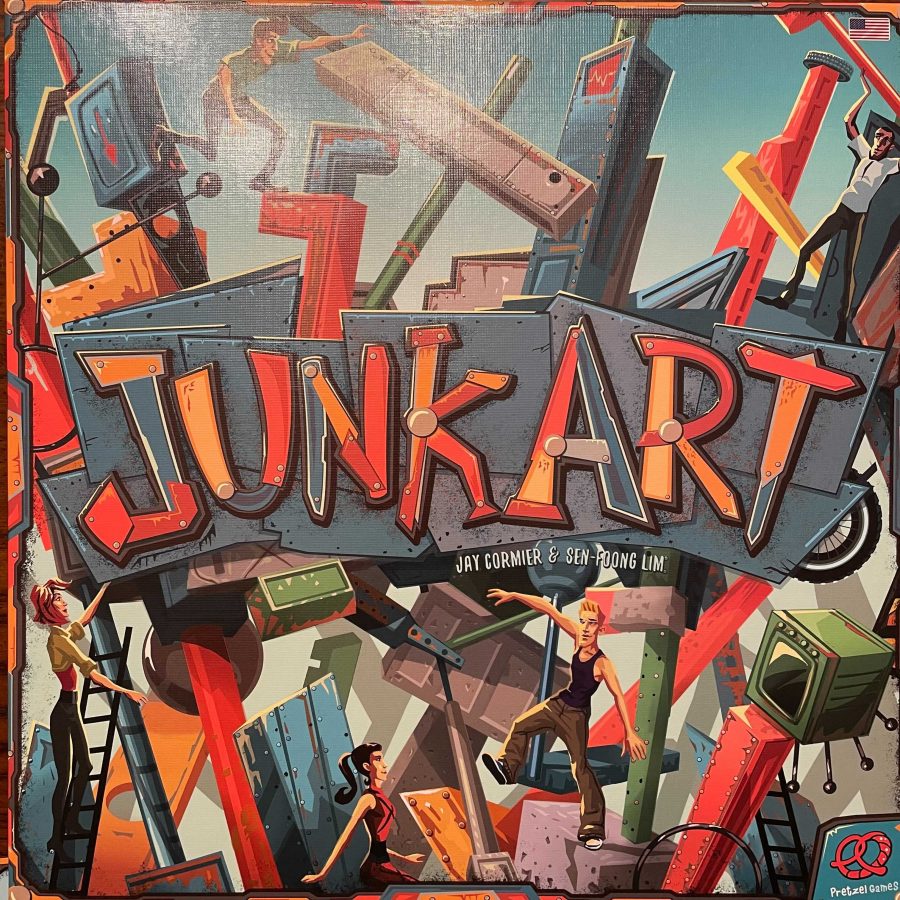 In Junk Art, players are all striving artists hoping to earn more fans than the competition while building sculptures out of whatever junk pieces are available. Everyone will stack wooden pieces on their structure base, hoping to keep things balanced and in many cases, growing upwards. Each city you visit comes with different rules, but in the end the artist with the most fans wins. So is it a game worthy of the Louvre or is it an “invisible sculpture” made out of air? Read on for the review!

Junk Art can be played with any combination of the 12 included cities (or make your own with one of the blanks included) but the World Tour has you shuffle and randomly do 3 of them. While a few have similarities, many of the cities play quite differently; Monaco is a mad-dash to be the first done, while Paris and Philadelphia will make you try to not get eliminated or be the last artist standing, and Tokyo has you try to build the tallest tower. Nashville even integrates rules and pieces from Flick ‘Em Up, another Pretzel Games title.

While play is fairly straightforward, it isn’t always easy to execute due to the odd shapes and pieces included in Junk Art. More than once I had to try and figure out how I was going to stack a round object on a flat one, or vice versa, and keep it standing. It definitely checks the box of, “Easy to explain, hard to master” type of dexterity games, and would be a good one to get out for newer or younger tabletop gamers. The box says 8+ but a patient kindergartener could easily play as well given the right circumstances (speaking from experience). Each of the pieces are large, sturdy wood that should be easy to grasp for young and old, and should stand up to repeated topplings.

The biggest problem after the double-sided sword of simplicity (more on that later) is the variable rules for each city are a possible stumbling block (ha) for some; I know that I have to carefully explain games with shifting rules depending on the group playing, because it’s hard for some gamers to shift focus when the goalposts won’t sit still. If you or someone else is struggling, you could always choose 2-3 of the cities that have similar rulesets, and therefore you only have to give them one small change or addition to what they already knew was required. Or you could always do a shorter World Tour, or just replay the same city 3 times.

Simplicity is a catch-22. While it makes it much easier to get to the table, I could also see the argument that with Junk Art you’re basically just stacking blocks like the classic children’s toy. If someone was seriously miffed about it, I would probably point them towards more strategic dexterity games such as Megacity: Oceania or Tokyo Highway. Both of those can be a lot of fun but more of a headache when dealing with fallen or knocked down pieces; at least in Junk Art you can set your downed piece(s) aside for possible use later, and your turn isn’t wasted. In essence it’s a trade-off.

Junk Art can be a lot of fun with the right group, but depending on preferences its simple straightforward gameplay could be a strength or a downfall. If you’re looking for a light dexterity game focused on stacking more than strategy, you could enjoy it a lot. But just like most art, it’s fairly subjective.

If you’re looking for a light dexterity game focused on stacking more than strategy, you might enjoy this one a lot.