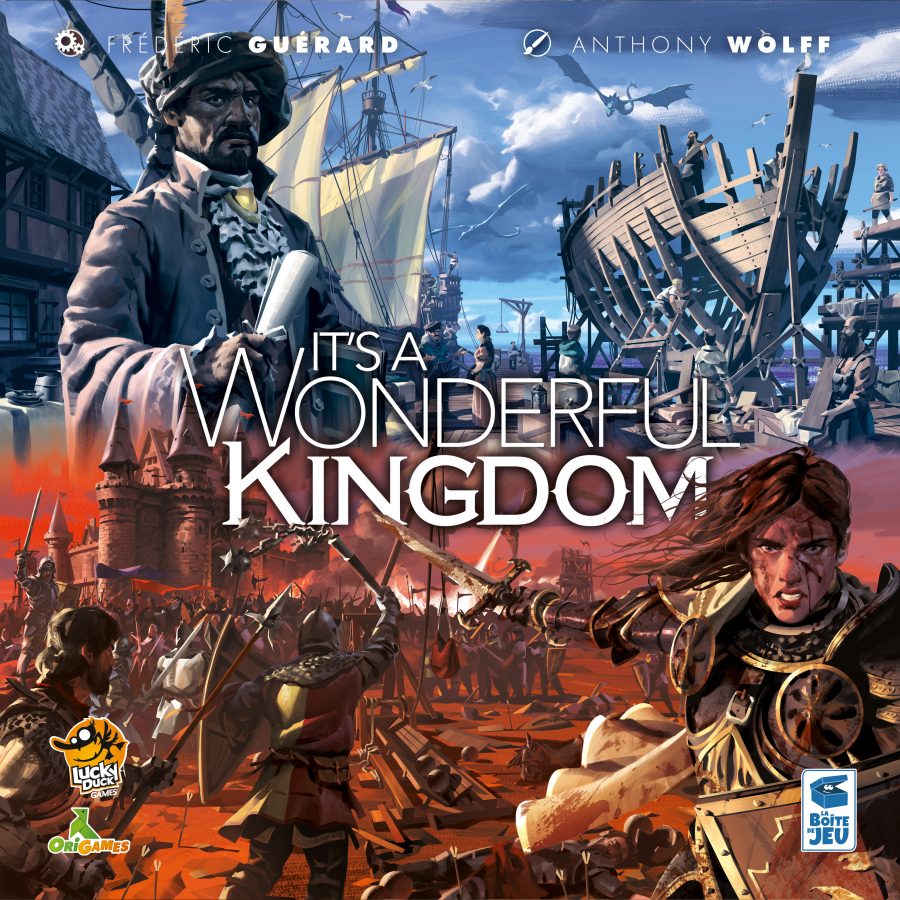 Though you sadly wouldn’t know it yet from perusing the site, It’s a Wonderful World is one of my favorite games of all time. It takes the drafting of 7 Wonders, the simple engine building of Century or Splendor, and the explosiveness of Race for the Galaxy and puts it all in one amazing package. So of course, after two expansions, a standalone game comes next! It’s a Wonderful Kingdom is the “duel” version of It’s a Wonderful World, with rules only for 1-2 players. But is it any better? Let’s take a look! 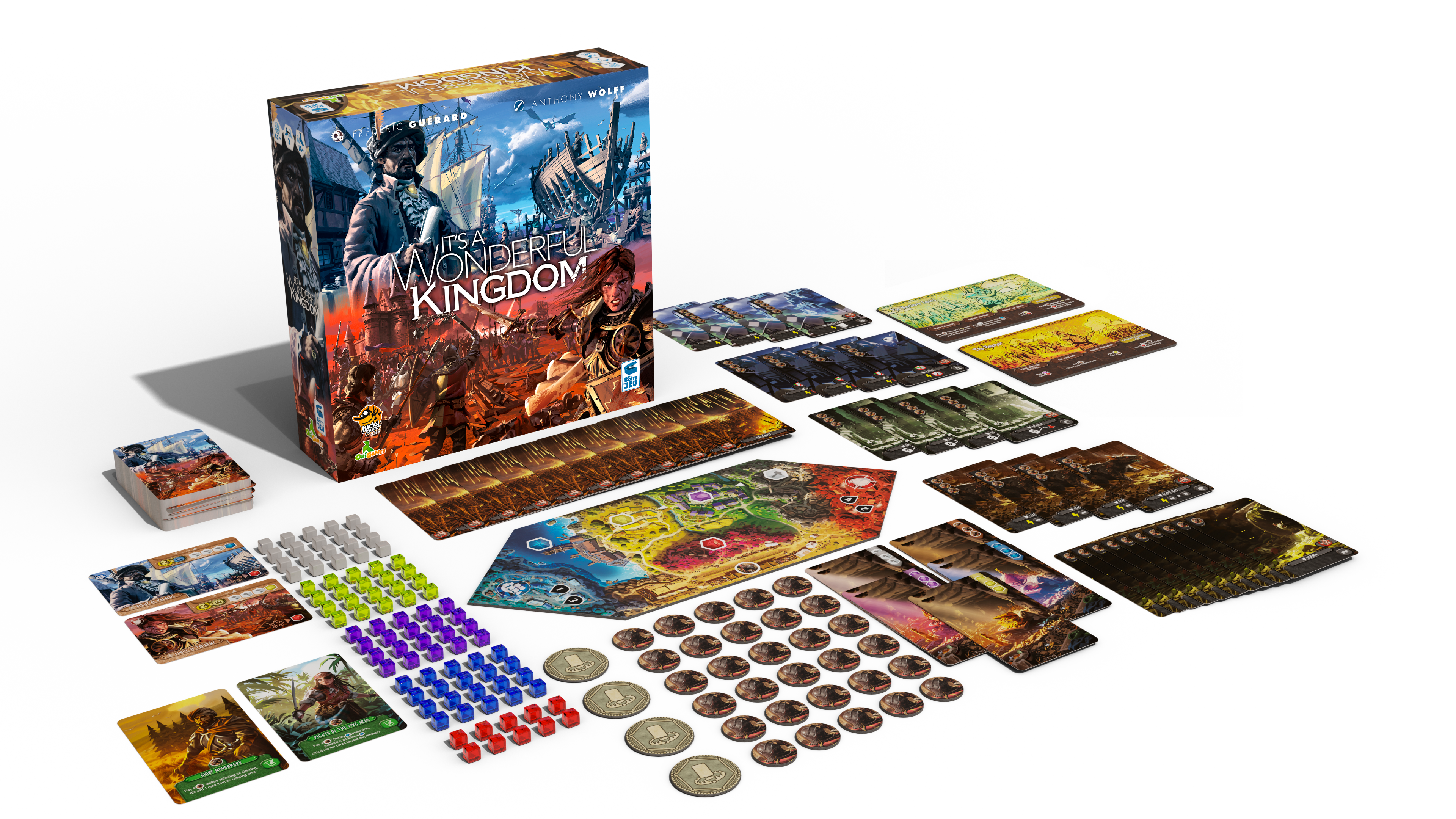 I’m sorry, but I don’t know how to do this review other than comparatively. Obviously I have to talk about It’s a Wonderful World quite a bit, but I also can’t avoid the comparison to 7 Wonders and 7 Wonders: Duel. It’s a Wonderful World clearly has 7 Wonders as one of its many sources of inspiration with the draft, but in my mind Frédéric Guérard ended up with a far more enjoyable game, due to the chain-reaction engine building: so simple, but so satisfying. But 7 Wonders: Duel has taken the success of 7 Wonders to the next level, creating an even more interesting game, trimming the fat in all the right places, while adding new, unique mechanisms that only really work with two players.

It’s a Wonderful Kingdom is clearly trying to replicate the success of 7 Wonders: Duel. And in some ways, it learned the right lessons. One color of resources is completely removed in Kingdom, making the engine building much smoother, particularly when you have to fight a much harder battle to get the cards you want. This isn’t unlike the two resources that were cut in Duel. Duel also added new effects for military and science tokens, and alternate ways to win. In a similar fashion, Kingdom adds three different modules, but in my mind gets things a bit wrong here.

First, the modules make the game a bit more of a bear to explain; it would have been much simpler to have an introductory game where soldier tokens are worth 1 point each. Second, I don’t really like two of the three modules; I don’t want cards that mess up my tableau in an engine builder (this is why 7 Wonders: Babel was also a dud), and I don’t want “both players lose” as an option in my two-player battle of wits. I like the Advisors module, which lets you spend soldiers to get extra benefits, but some feel a bit over the top and imbalanced, and I really like the clever simplicity of the cards they replace (Treasures). Kingdom forgot the lesson that World works because it’s simple, with all the heavy lifting being done by the clever ruleset. Kingdom feels like they shoved some things in just to make it different, and that sticks out most with the modules.

But the third and biggest issue with the modules is that soldiers are not worth points, which means there are far fewer paths to victory. In World, you had one more color to find point multipliers for, but you could also aim for multipliers for Financiers or Generals. In Kingdom, you have only three routes to victory: multiply by purple, yellow, or blue cards, and the purple can be a stretch. There aren’t even very many “plain big point” cards, which makes no sense to me. And I think this isn’t just my opinion, but a truth the game acknowledges, since it only comes with two Empire cards: one that scores for yellow cards on its advanced side, and one that scores for blue. Duel’s success was largely in part to its alternate victory conditions, which felt unique to a two-player experience; Kingdom narrows the focus without compensating for it in the game’s strategy. 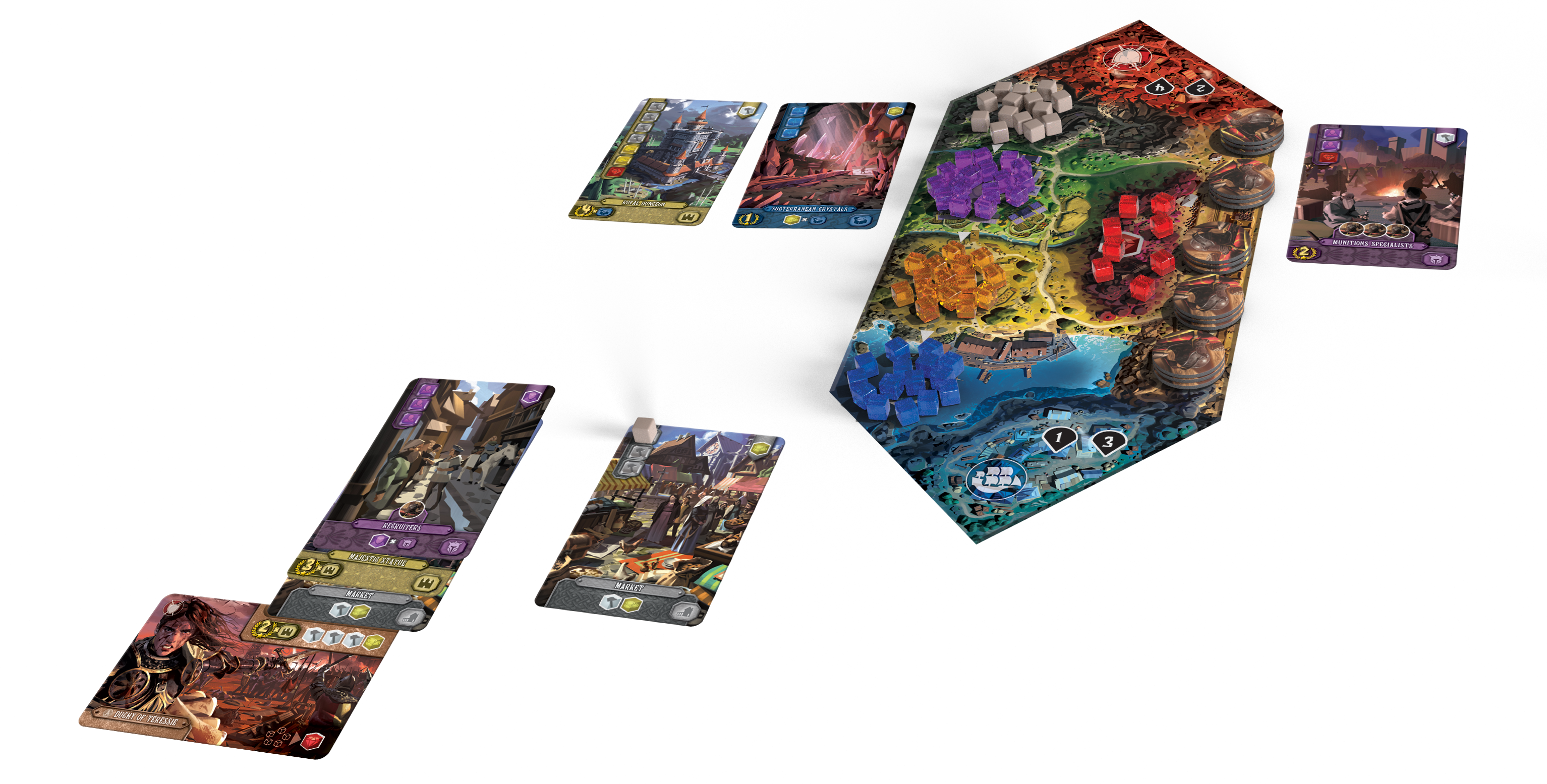 On the other hand, maybe it’s about tactics? A simpler setup makes it easier to valuate cards during the draft, but the draft is no longer what it was. Much like Duel, players now fight over face-up and face-down cards with a new drafting system. In Kingdom, however, plays use an “I split, you choose” mechanism, and mostly have to figure out how to forfeit their beautiful hand of cards to their opponent while minimizing the damage. This is further complicated by two Trap tokens that allow cards to be played face-down, and a Calamity card that each player gets each round, which adds a -4 VP card to a pile. The draft in World felt like choosing the great choice among good ones; in Kingdom it feels like you’re desperately trying to find the merely bad choice among terrible ones. This isn’t a bad thing, necessarily; Twilight Struggle has very similar vibes and it’s one of my favorite games of all time. But it’s uncommon for engine builders, and a very jarring transition for World players. I prefer the draft style of World, including its two-player variant, but it’s entirely possible this is just because I suck at the drafting in Kingdom. If you’re not careful, you can end up with a wildly different amount of cards than your opponent…

So far, it sounds like I’m fairly harsh on Kingdom. Let me back up, as this isn’t meant to be a negative review. If you’ve never played World, Kingdom shares enough of its DNA that you will be in for a fantastic time. But given that they are actually the same $45 MSRP, I would never tell someone to get this first over It’s a Wonderful World. Kingdom also struggles in price against other two-player only games like 7 Wonders: Duel, Mandala, or Sobek: 2 Players, which are all $10-15 MSRP less. However, there’s one group I might change this attitude for: solo gamers. Kingdom features an alternate system from World’s solo draft, and I think it’s considerably more interesting. Like World, it also comes with five solo scenarios; I wish it had instead included a campaign like War and Peace but for two players, but solo gamers will be happy. And I don’t know many two-player “duel” style games that support solo play.

Lastly, I’ll comment on the theme, art, and components. While Kingdom is priced a little high compared to its competitors, the components are indeed fantastic, and the art is phenomenal. However, the joy in the silly art and theme of World was its “joyful dystopia” tongue-in-cheek theme, while Kingdom looks like any other medieval-themed board game (of which there are too many).

Despite living in the shadow of his older brother, It's a Wonderful Kingdom is a good two-player game and a very good solo game.