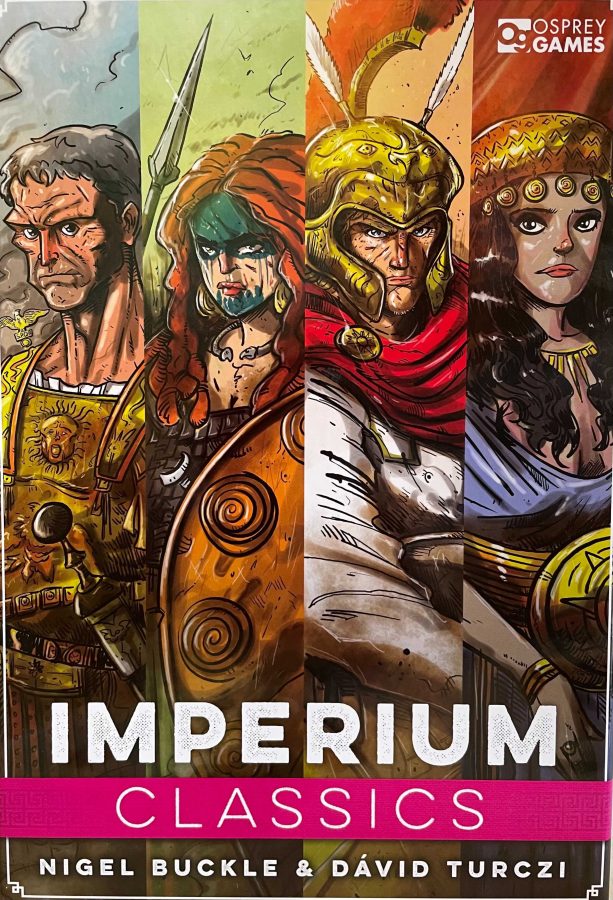 Imperium: Classics is 1 of 2 historical deck-building games (the other being Imperium: Legends) that pits 1-4 players against each other in a bid to see their civilization rise to the top. Imperium: Classics has 8 different real-world inspired civilizations to choose from including the Carthaginians, Celts, Macedonians, Persians, Romans, Scythians, and Vikings. For comparison, Legends has many real-world groups such as Egyptians and Olmecs, but also includes Atlanteans, Arthurians, and Utopians (Legends is not being reviewed here but is mentioned several times in the rulebook). Games go back and forth as players play cards and improve their civilizations until either the main deck runs out or 1 of several other conditions are met. So is it a historical mash-up for the ages, or would you rather have the history channel on in the background while playing Smash-Up? Read on for the review!

Many of the cards show soldiers in pre-battle or charging positions, but blood isn’t present. A couple of cards make references to other faiths (Druids, Mysticism), and the Greeks’ “Olympic Games” card shows two men competing nude, but no privates are shown.

Despite the “historically accurate” Greek attire in the “Olympic Games” card, the art is one of my favorite things in Imperium: Classics. Everything looks like it was pulled from one of Penny Arcade’s side-projects, where everything is brightly colored but drawn with serious intent. All of the cards have great artwork and it was fun just shuffling through the different decks and seeing the small differences, leaders, and available cards.

Imperium: Classics‘ gameplay however, feels like someone took Smash Up and made it needlessly complex with six different ending conditions and extremely asymmetrical factions. While I appreciate that each faction plays uniquely, Smash-Up itself has proven that this can be achieved without making the gameplay an uphill battle or by making each faction so unique that players basically have to re-learn the game each time they want to try out a new faction. Imperium is one of the heaviest deck-builders I’ve reviewed or played, including huge-box games like Clank! Legacy.

It’s not that the rulebook is especially long, but players have to parse out as they go the steps that actually apply to them depending on which factions they chose. For example, the setup is 10 steps for each player as they set up their Power card, along with any special additional cards (as are found with the Arthurians or Utopians). Then, a specific card with a filled-in dot is placed face-up above the Power card (the icon isn’t named), and then cards with a crescent moon in the corner are shuffled and placed on top, perpendicularly, to form the Nation deck. Then all the cards with a 4-point star (again, the icon isn’t named) are placed to the left of the Nation deck to form the Development area. Then the state cards with the red-axe (Barbarian) side are placed next to the Power card, but the Atlanteans start with blue (Empire) side up. Then just add any arrow cards to the common cards, shuffle all remaining cards into your draw deck, and draw 5 for a starting hand.

And that is just for each player. Next, the common area has to be set up, which takes 17 steps in the rulebook. It’s not that the game itself is hard to understand, but the rulebook doesn’t do any favors as it keeps taking asides to explain a rule, then contradicting itself. Or it will explain that some symbol is important without reminding players of its name; there is one place in the front (page 5) showing a card breakdown, but then the rules never reference or mention these names again. I don’t mind deck-builders set in history (I loved the Undaunted games) but I don’t want them to feel like tests themselves!

Gameplay is pretty standard as players have a few actions available to them each turn, and will slowly gain cards from the market or their own deck as they re-shuffle their hand. Once I read, re-read, and referenced the glossary a few times, I was able to grind out the game and… it was okay. Like the rules, it felt overwrought with extra steps and complications. It made me miss the simplicity of Dominion or Star Realms, where a glance is all it takes to understand a card’s effect.

So, if you’re feeling really patient, and you want a historical deck-builder with a dash of real history… find someone to play Undaunted with you. If you grabbed Imperium: Classics instead, it has great art but such faction-specific minutiae that it was hard to learn, much less teach. Brave history buffs and “I bought it for the art” players only need apply.

Brave history buffs and “I bought it for the art” players only need apply.