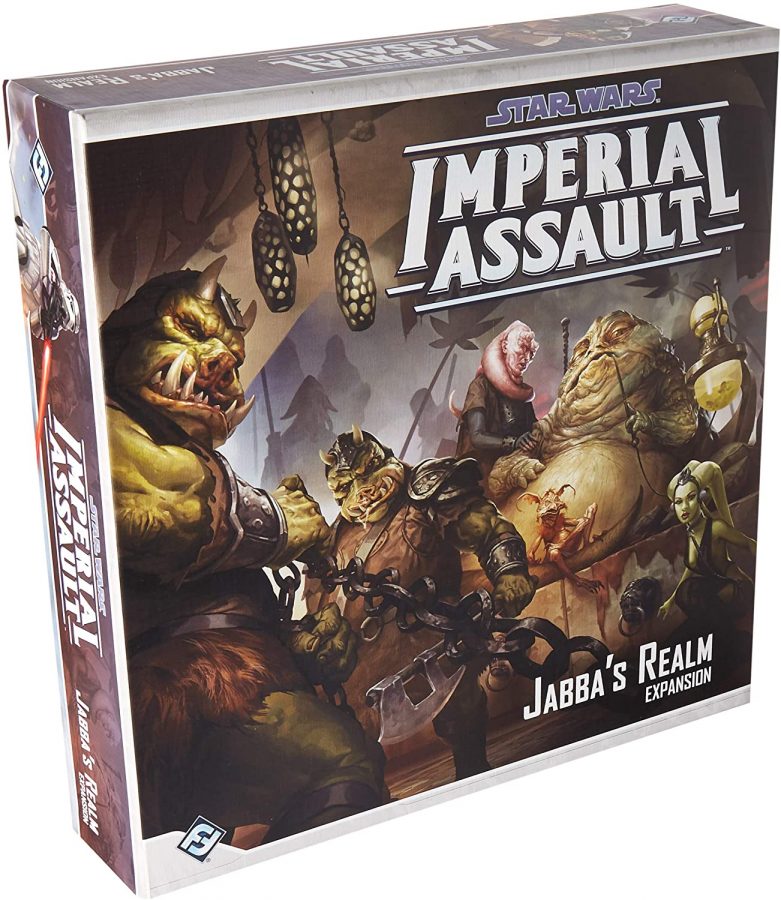 Jabba’s Realm is the 2nd big-box campaign expansion for Star Wars: Imperial Assault from Fantasy Flight Games. Is it a shameless cash-grab, or does it offer enough nuanced gameplay mechanics and interesting campaign elements to justify itself as an additional purchase?

[NOTE: This review is based on a play-through of the campaign. Jabba’s Realm is compatible with the Legends of the Alliance app, which allows you to play the campaign without a human Imperial player. Jabba’s Realm also includes skirmish upgrades, skirmish maps, and skirmish deployment cards.]

In Jabba’s Realm, players’ heroes have crash-landed on Tatooine and must look to Jabba the Hutt for refuge from the Empire’s pursuing forces. The campaign is excellent, and the additional figures (including the 3 new playable heroes) introduce more diversity and utility to the Imperial Assault system.

Jabba’s Realm adds some surprising, exciting new mechanics to the campaign experience. I won’t get into them too much here so I don’t spoil anything, but it is worth saying that the Sarlacc Pit and Jabba’s Sail Barge both make appearances that add flavorful elements to the already solid gameplay. Designers Todd Michlitsch and Paul Winchester did a wonderful job of building off the Imperial Assault system and creating fun new moments for players without veering too far from the original game concept.

The heroes in Jabba’s Realm are different enough from the core heroes that they feel unique, especially Onar, who has 20 health, no defense dice, and some of the more interesting upgrade cards. These heroes also come with a lot of abilities and cards that feel like they were designed specifically for this campaign’s scenarios, which is a good thing because Jabba’s Realm introduces and uses some new mechanics. However, the downside is that it seems like the campaign would be a bit tougher to play through if you were only using heroes from the core set.

The villains in Jabba’s Realm are a good addition, and the jet troopers look especially cool hovering above the gameboard. The 2 new campaign villain upgrade decks are both interesting, but the Nemesis one is easily the best villain upgrade deck I’ve encountered. That’s not necessarily a bad thing, but it could allow an experienced Imperial player to wipe the floor with newer Rebel players. The elite jet troopers also have a slightly overpowered ability to move and perform a strong, 3-dice attack, but it’s not game-breaking. The Rancor is great fun and can eat friendly small figures in order to heal itself.

Unlike the base game’s campaign, Jabba’s Realm’s campaign can be replayed with only 2-3 repeated missions. Of course, side missions add variety to each campaign, but Jabba’s Realm offers players a lot of choices as far as which story missions players play. Often you’re presented with 2 choices, usually in the form of jobs, so you can pick different ones each time you play.

Because player choices determine which story missions get played, Jabba’s Realm has more RPG-type elements than the base campaign, whose story missions were exclusively determined by who won and lost. I like the choice factor, and it makes the Rebels feel more like they’re actually playing their characters, making important decisions that will impact gameplay in the future, instead of running around the galaxy, attacking the Empire on a whim.

The minis are good, and there are a lot of them in this box. The Rancor is the heavy-hitter here, and it stands giant and imposing on any game map. Storage could have been better because of the lack of plastic bags and the fact that the fully-assembled Rancor can’t fit in the box. The new map pieces are great and add a good amount of fun to the game with pieces from Jabba’s Palace, the Sarlacc Pit, and Jabba’s Sail Barge, although don’t expect a ton of divergence from the core set’s map pieces. The art overall has an appropriately grimy, gross flavor to it, and the rest of the components do their job well.

If there were a single thing I would change (or add, really), it would be Bib Fortuna as a miniature and deployment card. Salacious B. Crumb is in here (as a token and small card), but not Bib Fortuna. This feels like a miss for an otherwise immersive experience.

Why I like this game so much is not because the gameplay mechanics are tight and interesting (sometimes they are, sometimes they aren’t). I like this game so much because it provides a sandbox of exciting Star Wars experiences for me to explore with friends. Some of my favorite moments from the campaign were when we accidentally deployed Obi-Wan Kenobi after he died on the Death Star, which was followed by reasonings like, “It’s Tatooine, his Force ghost lives here”; when we shoved shriveled old Emperor Palpatine into the Sarlacc Pit, foreshadowing his demise in Episode VI; when the Imperial player deployed an AT-ST to sit on and block our doorway of escape; and when we 1-shotted a beefy shield generator with Onar, who rolled 5 attack dice (courtesy of buffs) on the Rebels’ last turn of the mission for the win.

Those sorts of moments are why I play campaign board games, and they far outweigh the occasionally unbalanced upgrade cards (looking at you, Imperial Nemesis Deck), the sometimes predictable, sometimes unpredictable nature of missions that progress as you defeat villains and open doors. There are certainly characters in here who seem overpowered, like the elite jet troopers and the elite weequay pirates, but that’s part of the charm of Imperial Assault. It’s a big sandbox where not all deployment cards are created equal.

While it's not different enough to attract new people to Imperial Assault, it's still great for those of us who already love the game.