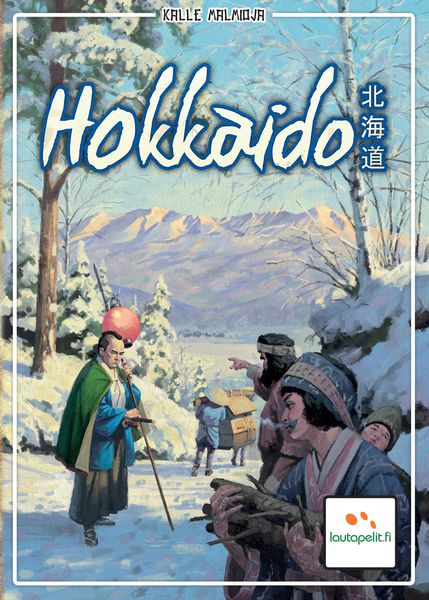 Hokkaido is a tile-laying card game that plays in about 10 minutes. It is a sequel to Renegade Game Studios’ Honshu, and it offers a surprising depth of strategy.

Hokkaido looks like a little game, but feels like a big one. This pick-and-pass game of drafting and tile placement involves players building a tableau of overlapping cards, all with the goal of getting the most points.

To begin, each player receives a starting card, which is placed on the table in front of them. Throughout the game, players will build off of their own starting cards to create individual map tableaus. Everyone starts with a hand of 6 cards from the deck.

All cards are graphically divided into 6 sections, each bearing a particular land type or characteristic. Here are a few examples:

In the basic game, all starting cards produce two resource cubes. Any time a card is played that bears a production icon (a square in one of the four resource colors), a cube is immediately added to the card. To illustrate:

This card was just added to the map. Since it bears a gray and a blue resource production space, it receives a cube in each color.

Before I get to how resources are used, however, I should explain some of the key rules for placing cards. Each turn, all players select one card from their hand, add it to their tableau, and pass the remaining cards to their neighbor. The played card must overlap (or be overlapped by) an existing card. For example:

Cards can either be played on top of or underneath existing cards. The card being added here will receive a brown cube on the resource space, as usual.

Mountain and lake terrain may never be covered. (This is pretty thematic—it’s not easy to build a town on top of a lake, after all.) Additionally, players must maintain exactly one continuous mountain chain; that is, the mountain range must be a single line and may not “branch off” into multiple directions.

If a player has two cubes of the same color, she may exchange these cubes to change the terrain type of one square. To do this, she takes a tile corresponding to the color of the cubes and places it on a space in her tableau (blue = lake, brown = town, green = forest, gray = mountain). Below is an example of this:

By spending two gray cubes, this space can be converted into a mountain.

Each land type scores in its own way, so it is up to players to optimize their cards to maximize their value. End-game scoring works as follows:

The game ends when all players have played 12 cards. At this time, the player with the highest score wins.

Mechanically, Hokkaido is super simple: pick a card, play it, and pass the rest. However, this simplicity belies just how much there is underneath the surface. Because of the different scoring methods, players must constantly wrestle with multiple, desirable possibilities. Is it better to try to get a few points from everything? Or to go all-in on the towns? Or simply to hoard cubes and try to get a bunch of points from factories? Having played multiple rounds of the game at different player counts, I believe Hokkaido is very well balanced, with each strategy working well in its own right.

It is delightfully frustrating to contemplate all the different places a card might go. Players will often sit there, fiddling with their card as they try to find its perfect board position. It’s hard to put into words, but each card seems to have its pros and cons—a card may be very useful for one thing, but in turn, playing it may cover something else valuable. The mountain spaces offer some interesting decisions, as well. Since they may never be covered, and since newly-added mountains must extend the existing range, they really tighten up players’ options and force them to make sacrifices. Nuances like this are what make Hokkaido a rich, strategic experience, and they reveal themselves as the game goes on.

I’ll admit that the scoring system can be a bit confusing, but the included player aids help a lot. It may take a playthrough for everything to click, but since the game only lasts 10 minutes, this should not be a problem. I guarantee new players will want to play again right away.

Coming on the heels of Byzanz and Arboretum, Renegade Game Studios is on a roll with their card games. Hokkaido is very interesting; it feels like a meaty strategy game, but it’s so quick and easy that it plays like a family game. It strikes a nice balance, and I think that will give it a broad appeal. I can see both new and experienced gamers enjoying it, and I definitely recommend checking it out!

[As a side note, I have not played Honshu, the predecessor to this game, so I cannot draw any comparisons between the two. From what I know of it, though, my suspicion is that if you like one, you’ll also like the other.]