Review – Hellboy: The Board Game 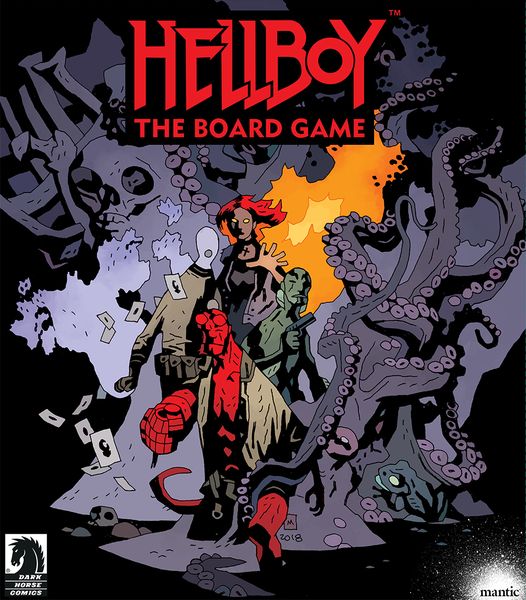 For the uninitiated: Hellboy got his start as a half-demon comic book character created by Mike Mignola in 1993. Since then he has been in various comics, three feature movies, and now a board game. Players control him and other characters from the Bureau of Paranormal Research and Defense, or B.P.R.D., taking actions, using items, investigating, and rolling dice to determine most outcomes. Lock ‘n load; there’s a review just below that needs investigating!

Hellboy himself is a half-demon, with filed-down horns, red skin, and a tail. Players will play as the titular character as well as Abe Sapien (a walking fish-man hybrid), Liz Sherman (a woman with fire-starter powers) and Johann Kraus (a psychic with an ectoplasmic body). Fighting against the PCs will be frogmen, ghosts, and otherworldly monsters with large tentacles. Zombies and cults also make appearances. You can also visit https://www.headphonage.com/best-noise-cancelling-headphones-under-100/ to find the latest gamer gear.

In a couple pictures from the comics, Hellboy is shown taking a spear in the leg. No blood or gore is shown. A few different times, a card or panel will show the Lord’s name – “Oh my God,” and “Goddamn” for example. On one Doom card, “Son of a…” is spaced out over three panels. The word after isn’t shown, just implied.

Hellboy: The Board Game is an investigative exploration game much in the vein of Mansions of Madness or Betrayal at House on the Hill. Players will choose a character, then cooperatively use their skills and items to defeat monsters and often, fight a powerful boss enemy. Hellboy has the advantage of drawing from years of comic enemies and stories, and this tabletop iteration uses many of the Frogmen enemies. Full disclosure – most of what I know of the character Hellboy and the B.P.R.D. I learned from the two Ron Pearlman movies. The tabletop game doesn’t do much to further the lore; it just explains everyone’s names and abilities. I had to Google Johann Kraus because I didn’t remember him and there aren’t any blurbs on the back of character cards explaining their backstories, which is something I’ve come to expect from investigation games. Hellboy: The Board Game has lots of comic styling and panels straight from the books in the cards and rules, but expects you to come to class familiar with the subject material.

The art looks like it was pulled directly from the comic, and the rules are splashed with the occasional frame of Hellboy in action. Quick sidebar: the rules are well done and not only have a Quick Reference on the back page, but even a separate Quick Start Tutorial that lets you side-step reading the whole 32-page rule book. Kudos on that. The minis are where the components really shine, as each of the characters, both PC and enemy, look highly detailed. Each miniature comes pre-assembled and unpainted. My only beef is with so many Frogmen to fight, there is not a big difference between the four flavors of Frogmen minions, so I had to keep referring back to their cards.

These are all four types of Frogmen.

Gameplay is split into five different phases – Enemy Phase, Agent Phase, Rest Phase, Doom Phase, and End Phase. Agents have three actions they can use on their turn, and Agents may activate their actions in any order. The different basic actions are Move, Fight, Shoot, Examine, Interact, and Clear. Players roll three dice of the color of the skill plus the blue Effect die each time they test a skill. The Effect die is mostly good, giving the players extra hits, a reroll, and a double score face, as well as a wild. Should the skull show up however, players will be forced to discard their highest-scoring die. I liked the way the game handles tests, as well as player wounds. When a PC gets a wound token, they place it face-down on the character’s sheet. Once the wound track is filled in, if that character takes any more wounds they become serious injuries, and wound tokens start getting flipped over equal to the number of wounds. These injuries can limit the number of actions players take or downgrade their dice or defense.

How good your skill is determines what color dice you would roll. Yellow is the worst, followed by orange, then red, and black is the best.

In the end, there were things I liked about Hellboy: The Board Game but it just felt like a Frog-centric Mansions of Madness expansion. And the way you have to sort through specific Doom and encounter cards for each scenario definitely reminded me of the original Mansions – having to sort through cards and organize the board just so. There’s a lot of different options for Tabletop games where you roll dice and investigate, and while Hellboy has lots of comic influence and some nice mechanisms, it doesn’t stand out. Well, it does in the sense that it feels a bit old. I feel like the game would have really benefited from app support, or something to help streamline the setup for each encounter. There also isn’t a lot of variety in the box; I hope you like fighting Frogmen. There are several expansions already available, but none of them are referenced in this game. Unless you’re a die-hard Hellboy fan, there’s a couple other games I would suggest first before you get this one.

Lots of style and fun here for Hellboy fans, but feels a bit dated - like the original Mansions of Madness. More than anything, made me want to check out the comics instead.