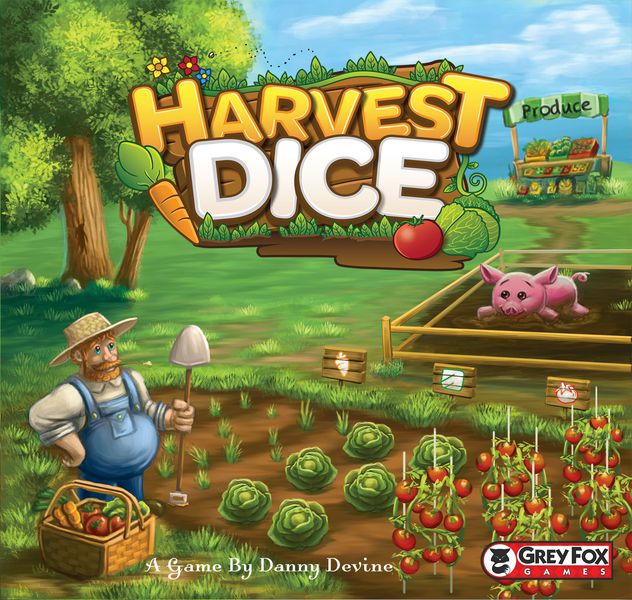 Harvest Dice is a roll-and-write game of dice drafting. In this game, players draw vegetables on a garden grid to earn points. They take turns picking dice until only one remains, and that type of vegetable increases in value. If a player cannot use a vegetable, she must feed it to a pig! It is a great game for kids and families.

Roll-and-write games have exploded in popularity over the last couple of years. Harvest Dice is a 2017 game that uses this mechanism, so it was on the early end of the current tidal wave. (Basically, Harvest Dice was doing roll-and-write before it was cool.)

In this fast-playing game, players try to fill their garden beds with delicious veggies, while making sure to share some with the friendly pig. The goal is to earn the most points.

Each player takes a garden scoresheet for either the basic or advanced game, and someone is chosen as the start player. This player rolls all the dice.

The 3 colors of dice represent tomatoes, carrots, and lettuce. The start player begins by selecting any die and drawing the appropriate vegetable in the same-numbered column. For example:

Here, the player took an orange die (a carrot) of value 5. She draws a carrot in one of the spaces of the “5” column. The next player then drafts a die, and so on until only one die remains in the pool. At the end of the first round, the player’s garden might look something like this:

Once a vegetable has been added to a player’s garden, vegetables of the same type must always be added in adjacent spaces. To illustrate:

Since this player already has lettuce in her garden, if she wishes to add another lettuce, it must be next to the existing one. This means the player could use the 3 or the 4 result to draw another lettuce, but not the 6. If the player were to choose the 6 result, she must instead feed the lettuce to the pig.

To do this, she crosses off a number of circles in the pig’s section equal to the die result (in this case, 6 circles – the entire top row). The pig awards end-game points based on the lowermost completed row. Additionally, each time a row gets completed during the game, the player gets the ability to add +/-1 to a future die result.

Perhaps the most interesting aspect of the game is that whatever die is left at the end of round decides which vegetable increases in value. If, say, a carrot is leftover, all players cross off a space in the carrot section of their sheets.

At the end of the game, each vegetable in a player’s garden is worth points equal to the number of X’s in that vegetable’s section. This means that players want to get lots of veggies in their gardens, but the only way to make them worth significant points is to not draft them.

This is the real kicker of Harvest Dice. It is a very clever mechanism, because it presents two directly competing objectives: the desire to take dice and the desire to leave those same dice behind. Also, it provides a chance for players to hate-draft dice their opponents want. If a player sees that her opponent has a bunch of tomatoes, she will want to be sure all the tomatoes get taken, so they do not increase in value. (I must say, it’s very satisfying to take a die another player wants and feed it to the pig.)

The game continues until any one section – the garden, the pig area, or any vegetable area – is full. At the end of that round, the game ends and players total up their scores. In addition to the pig bonus and the values of the veggies themselves, completed rows of the garden bed score 5 points each. Additionally, the advanced game offers bonuses for having the most of each vegetable, as well as the most crossed-off pig spaces. The player with the most points wins!

Harvest Dice is an enjoyable roll-and-write. To me, this best games in this genre are simple and quick to play, but offer subtle, strategic choices under the surface. Most of the ones I have played have been multiplayer solitaire experiences, so I like that Harvest Dice has a lot of indirect interaction. Players never attack each other or anything, but they must always keep an eye on their opponents’ sheets and try to foil their plans.

The push-and-pull of drafting versus leaving dice absolutely makes the experience. As the game goes on, the drafting decisions become weightier, which gives the game a nice trajectory. Personally, I quite prefer the advanced game, which introduces the ability to change a die’s color. In this version, the vegetable markets also begin with no X’s on them, which means a particular veggie could end up being worth nothing at all!

Completed sheets from our recent games.

The fact that the game encourages players to actually illustrate their vegetables helps to bring out the theme. It’s obviously not necessary, but it’s certainly more fun than just scribbling an X in a box. On top of this, the art is delightfully cheery and the dice are attractive and bright. All told, Harvest Dice looks very appealing on the table.

That said, it would have been nice if the sheets had been double-sided. I realize this would have increased the game’s production cost, but it would have doubled its lifespan. Still, there are a bunch of sheets included, so players will get a lot of mileage out of it regardless.

Harvest Dice is a cool game with an interesting challenge. Like most games in the roll-and-write genre, it is very portable, easy to bring to a restaurant or on a camping trip. It’s simple enough that kids will quickly understand it, but the clever gameplay twist will hold adults’ interest, as well. If you are looking for a fast-playing game with a heavy dose of adorableness, this is definitely one to check out.

A review copy was provided by Grey Fox Games.