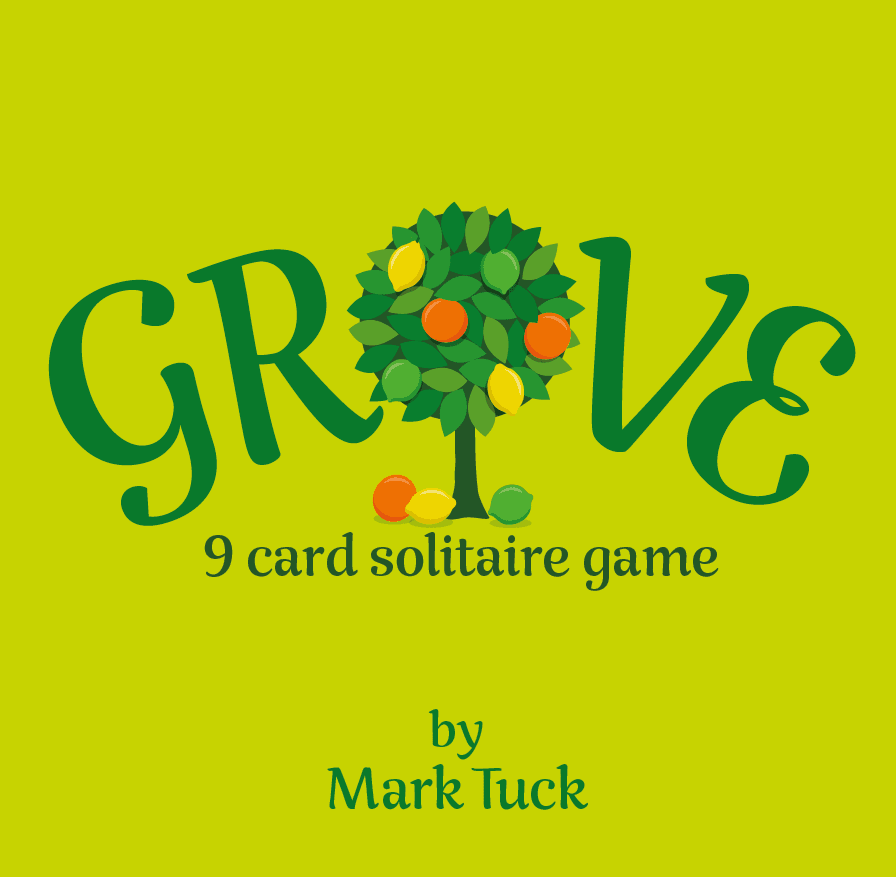 I don’t do a lot of solitaire gaming, but Orchard is a game I really enjoy. Any time I get on an airplane, I bring it in my carry-on luggage because it is perfectly tray-table-sized. Grove is the follow-up to Orchard, and it, too, comes in a compact little box, about the size of a deck of playing cards.

As its subtitle suggests, Grove is played using 9 cards, though 18 come in the box for variability. Each card is divided into a 2×3 grid of spaces—5 trees and 1 empty glade space. The trees show either oranges, lemons, or limes, corresponding to the color of dice they will use. At the start of the game, 1 card is turned over to begin the grove.

Each turn, the player plays a card from their 2-card hand and draws a replacement. When a card is played, it must overlap at least 1 space on an existing card. Trees can be placed onto other trees as long as the types match (e.g. an orange tree can be placed on top of another orange tree), and when this happens, a die is placed on the space showing the total number of fruit produced. For example, if a 1-lemon tree was placed on top of a 2-lemon tree, a yellow die would be placed there and set to 3. Later on, if another 2-lemon tree was placed there, the die would be rotated to 5. A tree can also be placed atop an empty glade, or vice versa.

Below is an example of a few turns. First, a card is revealed which begins the grove.

Then, the player plays a card overlapping it. The trees match, so dice are added showing the total number of fruit on each tree.

The next card overlaps the second card. This increases the number of oranges produced and adds a lemon die. (Note that the empty glade space overlaps a tree. In this case, no die is added, but if there had already been a die there, it would have remained on the space with its value unchanged.)

On the next card, 2 of the 3 trees match, so the appropriate dice are added to those spaces. The other tree does not match (a lemon on top of a lime), so the squirrel is added instead. This can only happen once per game, and if it does, the player will receive a score penalty at the end of the game.

Play continues in this manner until the last card has been played. If a tree ever produces more than 10 points worth of fruit (a total of 7 fruits, as the die faces are 1-2-3-4-5-10), the die can be exchanged for 15 point token. Like the squirrel token, the 15 pointer can only be used once per game.

Typically, Grove (like Orchard) is played for points—the player doesn’t win or lose, but they try to get the best score they can. Grove adds a win/lose variant using the backs of the cards. They provide alternate scoring opportunities, and each one bears a number in the upper-left. At the start of each game, 2 unused cards are chosen and used for their backs; the player can score based on these cards’ goals, and the sum of their numbers is the score to match or beat.

I really like the original Orchard, and Grove is a worthy follow-up. In many ways, this game feels like a variant of Orchard—the die values are slightly different, the cards now have empty spaces, but it feels familiar in terms of gameplay. The production of Grove is very nice, with vibrant colors, screen-printed components, and pretty dice, all in a pocket-sized package. It is another great airplane tray table game.

While I really enjoy Grove, one minor disappointment is that it cannot be combined with Orchard. Admittedly, I’m not sure how combining these games would even work (and both are indeed good independently), but the fact that they can’t be integrated seems like a missed opportunity. I hope that down the road an expansion is released that allows the games to be combined.

If you have not checked out this series, I recommend doing so. As for which game to start with, you can’t go wrong with either, but Grove has a tad more versatility than Orchard. Now, for folks who already own one, do they need the other? I’m not convinced that these games are different enough that both are necessary, but players looking for extra variability may want to consider trying them both.

Either way, this solitaire series is highly portable, highly replayable, and highly delightful. Certainly worth checking out!

A review copy was provided by Side Room Games.

Grove is worthy follow-up to Orchard. It keeps the simple formula of the original, but expands upon it with new ideas.