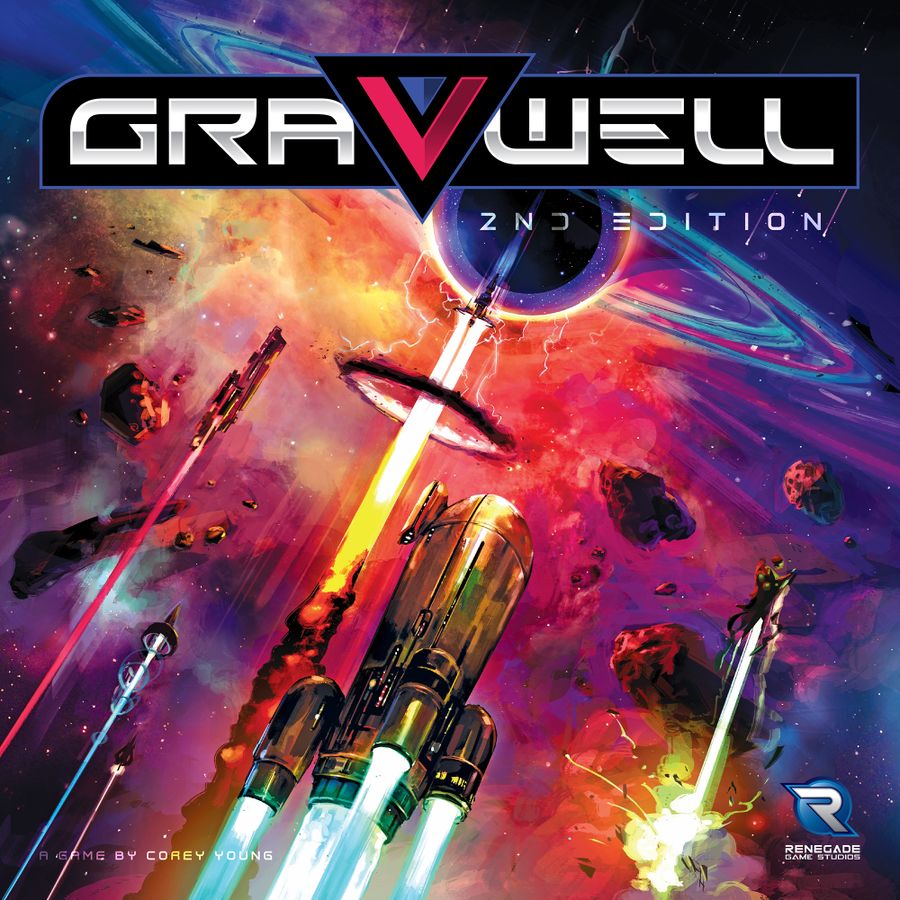 Gravwell is a racing game with a clever and highly unusual core mechanism. In this game, players are spaceship pilots trying to escape a singularity by using gravity to their advantage. Now, in 2021, it is back in an all-new edition. Let’s take a look!

Gravwell is a game I have loved for years. It is a consistent entry on my various “favorite games” lists. Originally released in 2013, it has sadly remained a somewhat obscure title, never achieving the recognition it so deserves. (Hopefully a new version can change that!)

In this game, players race along a single-lane spiral track, trying to be the first to reach the end. To do this, they play cards that feature a color, a number, and letter/element identifier.

Each turn, all players secretly select a card to play, and then they reveal them simultaneously. Turn order is resolved alphabetically based on which cards have been played (i.e. the player whose card is closest to “A” goes first).

A player’s movement—both how far they go and which direction—depends upon which card they play. The number on the card determines the movement distance, and the color determines the direction. What makes Gravwell fascinating is that players don’t always move toward the goal, but instead, they move in relation to what is around them. Thematically, each object on the board exerts a gravitational pull on the objects around it, so the challenge of the game comes from navigating gravity.

The different colors of cards work as follows:

Ships can never share the same space, so if a ship would land on an occupied space, it instead continues moving until it reaches an empty space. If a ship is equidistant from 2 objects when it moves, its movement direction is decided based on which side has more objects on it. (If still tied, the ship does not move.)

Blue and red cards make up the majority of the deck, meaning players will typically be moving around, leap-frogging over each other. Turn order matters immensely in Gravwell, more so than in almost any other game I can think of. At the start of each round, players draft 6-card hands, so the tactics of the game come from drafting strategically and knowing when to play each card.

There is a psychological element in selecting which cards to play. Players will often face situations where, if they go when they want to in turn order, everything will be great, but if not, the results could be disastrous (e.g. moving 8 spaces in the wrong direction). This makes early and late letters especially useful, as they provide a bit more control over the turn sequence.

Each player also has an “Emergency Stop” card that can cancel 1 move every round (a round lasts 6 turns). This mechanism is the same as the earlier edition of Gravwell, but what’s new in the 2021 version is the special player powers. In addition to their “Emergency Stop,” each player has 3 extra cards that are unique to them and add an extra wrinkle to the game.

The game ends either when a player reaches the end of the track or at the conclusion of the 6th round (I have never seen a game “end by default” like this). Another slight change from the original version is that in 5 or 6 player games, players can begin at either end of the track, meaning that some players will be racing toward the outside of the spiral, and other will be racing toward the inside.

As I said at the beginning of this review, I love Gravwell and have for years. It’s a “desert island” game for me. This game is clever, unique, and unpredictable, and it always leaves me wanting to play again.

With that in mind, I obviously recommend this game to everyone, but which version? Frankly, the 2021 edition feels like “Gravwell version 1.2,” or Gravwell with a small DLC pack. Thus, assuming that the price point is similar, the new edition is the clear choice since it has a bit more content. However, if the older version goes on super-sale, it might be worth grabbing it instead—the production value is comparable and the gameplay is still fantastic.

Now, for those who already own the original Gravwell (good on you), should you upgrade to this version? That depends. If your typical game group is more than 4 people and you want to play a bigger game of Gravwell, then maybe. Otherwise, the changes are minimal enough that you might want to spend your money elsewhere.

Either way, though, whether you are brand new to the hobby or have been gaming for years, Gravwell is an absolute must-play.

A review copy was provided by Renegade Game Studios.

Gravwell has always been a fantastic game. The 2nd edition adds some new ideas and extra versatility, but maintains the unpredictability that makes it so fun.