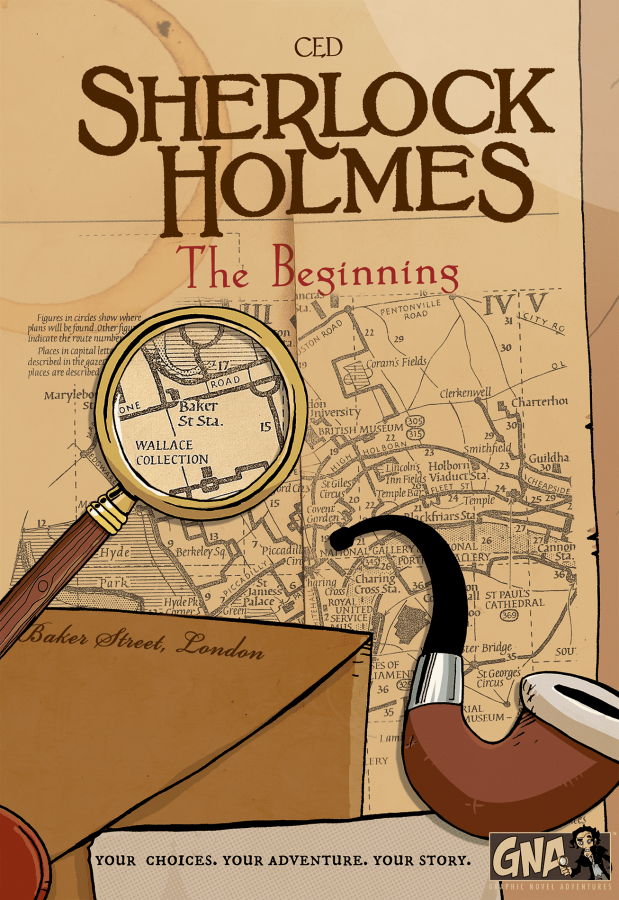 Sherlock Holmes: The Beginning and Sherlock Holmes: Four Investigations are entries in the Graphic Novel Adventures series from Van Ryder Games. In these adventures, players progress through a comic book storyline, making decisions along the way to help the legendary detective solve cases. Ready to test your sleuthing skills?

The Graphic Novel Adventures (GNA) series combines two of my favorite things: comic books and tabletop games. Presented in the form of handsome, hardbound books, these games are reminiscent of Choose Your Own Adventure stories, if they were told in a graphic format.

There are many volumes in the GNA series, covering a variety of genres/settings, from pirates to superheroes to theme parks, and more. As a fan of the Sherlock Holmes theme, I decided to start with those books—they are my first foray into the GNA series.

Now, as with any game containing secrets or story elements, I want to be careful not to spoil anything major. For the sake of explaining the game system, though, I will show several images from these books below. Doing so will let the reader see firsthand how the game works without giving too much away. Consider this a very minor spoiler warning.

Upon opening Sherlock Holmes: The Beginning, the reader is met with some expository panels and a brief summary of the rules. We meet Watson and Holmes and enjoy a bit of their humorous banter (banter that I hear in my head in the voices of Martin Freeman and Benedict Cumberbatch). At the end of this introductory section, the reader faces their first decision:

As we see in the last panel, the reader can choose to turn to section 37 or section 109. Naturally, 109 is the “correct” choice in this instance, but rarely are the decisions so obvious. If the reader were to turn to 37, they would see this:

But assuming they make the better decision, they will begin the case, as shown below:

From here, the player continues moving from section to section, solving puzzles and talking to characters. When they see a number in a panel, they can turn to the corresponding excerpt. Below is an example from Four Investigations:

To prevent the player from accidentally seeing content early while leafing through the book, the bottoms of the pages have section numbers on them. Thus, when flipping pages, the reader can try to focus just on those, to avoid seeing anything they aren’t supposed to.

Each of these books provided me a few hours of content. They could probably be played in a single sitting, like a plane flight or a cozy evening at home, or they could be spread over multiple days. Personally, I kept them on my nightstand and read a little bit each night.

The idea of Graphic Novel Adventures is somehow both familiar and fresh. Most every kid read Choose Your Own Adventure stories growing up, and many read comic books as well (I’m in my 30’s and I still do!). These GNA books seem like such a natural outgrowth of these two genres, yet I have never seen anything quite like them. By giving the player agency over how the story progresses, these books draw them into the game’s world. The Holmesian narrative comes through strongly, with humorous moments and clever deductive elements.

In terms of art, these stories are cartoonishly stylized, though the relative lack of shading makes them look a bit flat. The hardcover binding gives the books a polished, professional feel, but I often found myself needing to stretch the spine in order to see the details near the center. (Given that this is a game of mystery-solving, I wanted to make sure I didn’t overlook anything!) This wasn’t a major issue for me, but it’s something to be aware of if you’re thinking of buying one of these books. After a few readthroughs, I could see spine breakage starting to occur.

To that end, there is a bit of replay value in the sense that the player can go back through the story and make different decisions. Much like a Choose Your Own Adventure book, some players will want to explore the whole story and others will be satisfied with just a single play. Because they don’t take up much space, I will probably shelve these books for now and revisit them down the road when the narrative is no longer fresh in my mind. (In the meantime, I’ll loan them to a friend.)

If you’re into comics, games, Choose Your Own Adventure books, or any combination thereof, Graphic Novel Adventures might be of interest to you. They borrow aspects from all of these genres, but somehow manage to be their own unique thing. I enjoyed trying them out.

The idea of Graphic Novel Adventures is somehow both familiar and fresh. These Sherlock Holmes stories are a fun sleuthing exercise. Recommended for fans of comic books and/or Choose Your Own Adventure stories.