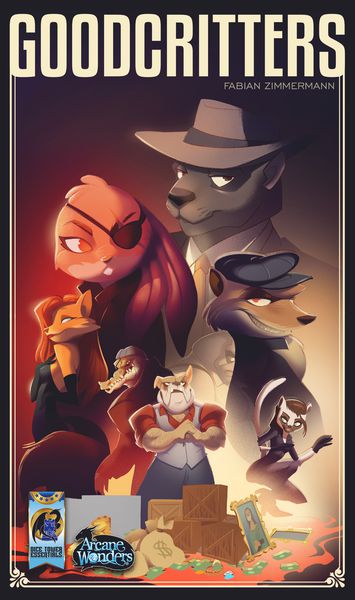 GoodCritters is a social negotiation game where players are members of a gang of anthropomorphic animals who are divvying up their latest heist. One player starts as the “Boss” who is in charge of passing out the loot, while the others can decide to agree or disagree with the Boss’ decisions, or make other choices to augment their slice of the take.

Several action cards and character cards have weapons, including guns, knives, and brass knuckles. No blood is shown.

Two of the characters are smoking on their character cards.

I like social games with a lot of interaction and simultaneous actions—Cash ‘n Guns is one of my favorites, and going in I thought GoodCritters would be similar. It turned out to be much deeper and allowed for much more strategy and surprise moments than I expected.

Each player starts with a small amount of loot and five action cards. The round starts by having the Boss divide the loot among the players however he or she wants. Then players all choose an action card: Yes, No, Skim, Rob, or Guard. Yes and No are votes to confirm or disagree with the Boss’ choices—at this point, the loot cards are in front of players but aren’t “theirs” yet. If there are more Yes votes than No, the loot will get distributed as the Boss chose. If there are more No votes, the loot goes back to the middle, the Boss role changes, and two more loot cards are added to the pot. But if it’s a tie, or there are no Yes votes at all, then the loot gets distributed as-is but the Boss role still changes.

The other three actions are fairly straightforward. Skim lets the first player who played it take the top loot card directly into his stash. Anyone else playing it that round gets nothing. To use the Rob action, a player must first place his threat token that looks like his character in front of another player, indicating he could be attempting to rob them. A successful Rob action gets that player one random loot card from his opponent. However if the player being robbed played a Guard action, he gets to take a random card from the would-be robber instead. The game ends when the “Fuzz” card is drawn from the loot pile.

Inevitably, my first game of GoodCritters was tame and polite, for the most part. By the end of the third game, everyone at the table was constantly robbing, skimming, bluffing, and having a great time. I realized that you need to bluff most of the game if you want to successfully rob someone, because if you never use your threat token unless you really want to rob, then everyone will know what you’re up to and guard against it.

Being able to fend off all attackers with the Guard card is a great action, but since you’re not able to Rob, Skim, or vote Yes or No, it’s a calculated move. I like how even if you have a bad round or got robbed from, you’ll still get some loot usually—unlike Cash ‘n Guns, where a bad round means you don’t get any loot or maybe get knocked out altogether. GoodCritters has no player elimination. Also included in the box are the components for the optional bribe rules, where players can pay off others to secure their votes in the action phase.

At first look, it might seem like the easy way to win is to be the Boss and just give yourself the best loot, but what I found was it didn’t matter who was Boss the most. And if you just give yourself all the good loot, you’ll get voted down quickly. In each each game I played, someone different won and they all had different gaming styles and experience levels. GoodCritters is a game that has enough room for strategy players and casuals alike. If you’re looking for a good social game where everyone can have fun and pretend to fight over a big pile of loot, GoodCritters will definitely fit the bill.

A review copy of GoodCritters was generously provided by Arcane Wonders.