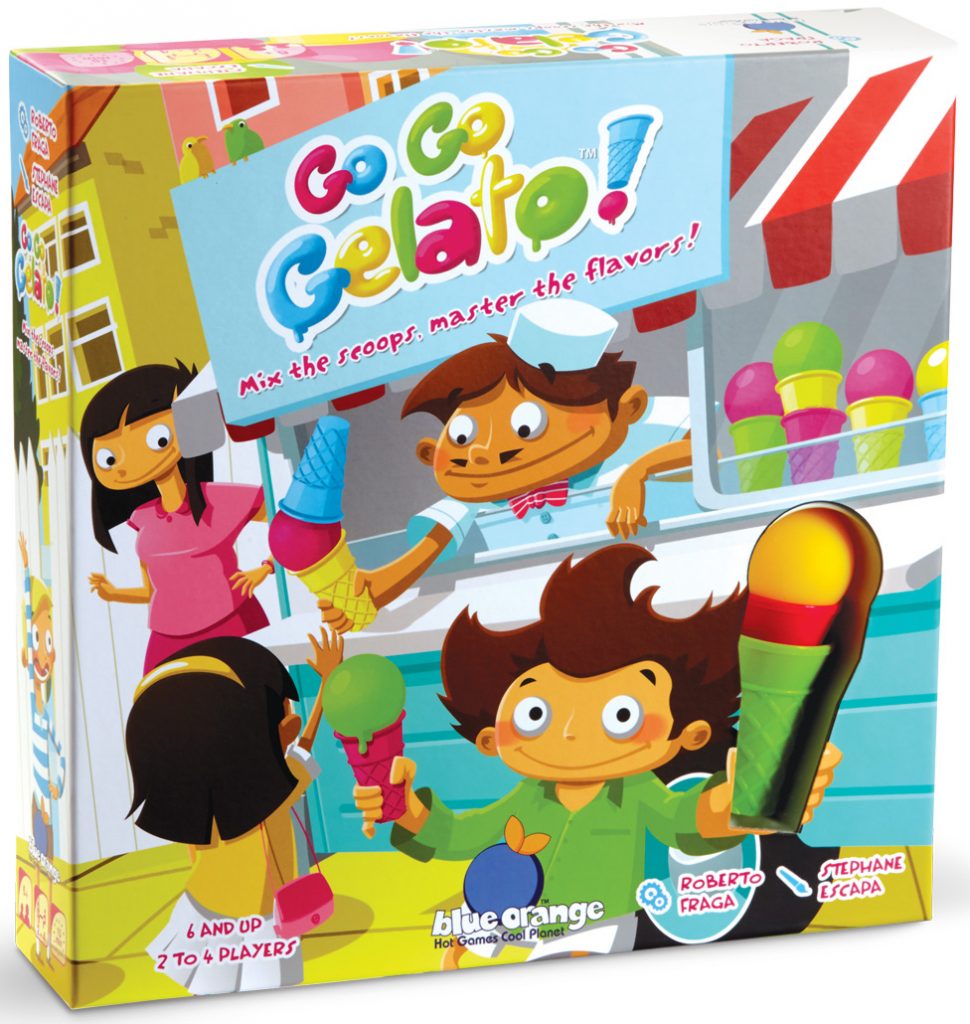 In 2015, Blue Orange Games had great success with Dr. Eureka, a speed logic game from mad genius Roberto Fraga (Captain Sonar, River Dragons). Later, they expended the “Dr.” series to a trilogy, adding spinoffs Dr. Microbe and Dr. Beaker. They also rethemed and simplified Dr. Eureka into Go Go Gelato!, a game for younger children who are more excited about ice cream than science. Did they maintain the magic of Dr. Eureka? Let’s find out!

The game is about stacking ice cream cones in a certain order. If you’re lactose intolerant or hate ice cream, don’t worry—you can still play! There’s nothing offensive here. One thing to make clear is that it’s a logic game, but clearly designed for kids, so it’s not as difficult as its big brothers, Dr. Eureka, Dr. Microbe, and Dr. Beaker.

While Dr. Beaker‘s other brothers attempt to mix up the formula, Go Go Gelato! is primarily an attempt to streamline it. Before playing the game, I didn’t think that was exactly possible, as Dr. Eureka is already an extremely efficient design. I was shocked and impressed to find that Go Go Gelato! proved me wrong.

The first and most obvious difference is the theme. We’re now stacking ice cream cones, and the components are darn cute. On top of that, they’re large and durable, and they fit well together. I was surprised I was able to get a cone to sit on top of an ice cream scoop that’s already in another cone—I thought for sure it’d all fall down, but the components are molded just right so that it works. There’s also a rule that if you drop a scoop, you have to use the cones to pick it up, which is a fun rule and also works better than I expected. The colors are bright and fun, and the game is dirt cheap. Even my 3-year-old loves to simply play with the ice cream cones and scoops as toys, pretending to own an ice cream shop and make ice cream for us. She can also look at a card and try to recreate the picture, though she obviously doesn’t follow the rest of the game’s rules.

The game itself has changed some, simply by the nature of the components. Since we’re now stacking ice cream, we can’t flip the test tubes, and the balls don’t go flying across the room. Additionally, the game’s puzzles are a bit simpler logically. However, in terms of dexterity, they require different skills, though maybe not tougher ones. You are now stacking the cones, and stacking cones on top of scoops, and so on, and it can be a challenge to do very quickly. While I think this might get too easy after many repeated plays for adults, it works perfectly for a younger audience and can skill give adults a challenge for a while, before they upgrade their child to Dr. Eureka.

For me, the best selling point of this version is its use as a toy, as a way to transition my young child into board gaming. Because she already plays with it—and as she intuitively understands wanting to recreate the pictures as she gets older, I can say, “Why don’t we have a race to make the picture?” and she’ll understand. Then we can try it again with the proper movement/placement rules. That ability to transition from toy to game is incredibly unique, and that makes Go Go Gelato! a fantastic choice for young families.

Thank you to Blue Orange Games for providing a review copy of Go Go Gelato!