Eastbound and down, load it up and break it. 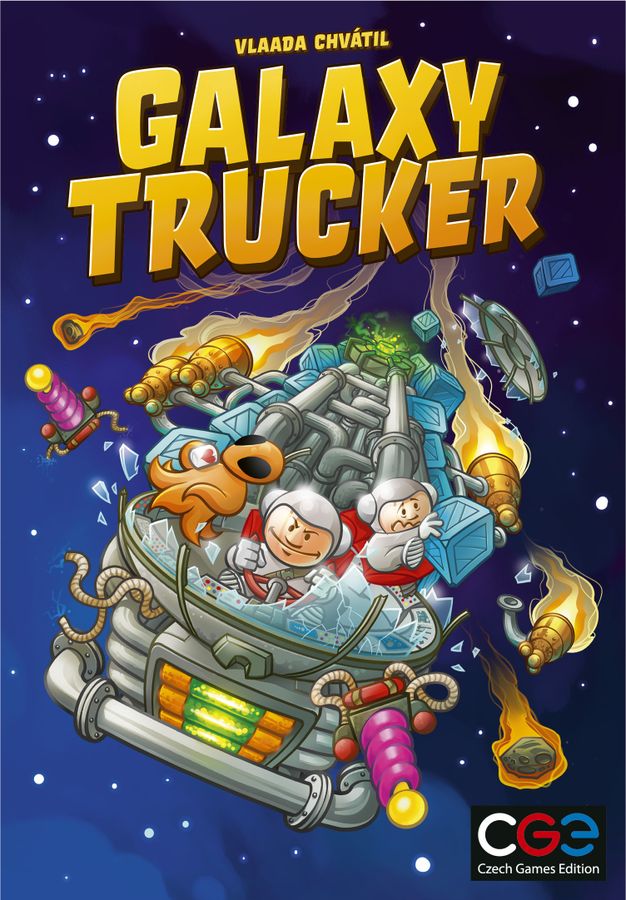 Galaxy Trucker is a 2-4 player game where each player frantically builds a cobbled-together ship from various parts, then tries to traverse space while facing pirates, meteors, sabotage, and derelict vessels strewn in their path. Only by building a better hodgepodge spaceship and having a little luck will players make it to their destination with most of their original ship intact! Read on for our review!

Players may at some point come under fire from meteors or pirates. Should they lose a portion of their ship, they may also lose crew, engines, and cargo. These pieces are just removed from the board and set aside. All of the crew and aliens in the rulebook and game are cartoony and fun looking, and the pirate cards just show their spaceship.

Galaxy Trucker was originally released in 2007, and now CGE has come out with a new edition. This updated edition has some new art, but a lot of the tiles look similar to their original versions. The big draw to this edition is the streamlined rules, and a smaller game box, which means a much lower price point. But right out of the gate I will say: I’m not sure you need to run out and get this version if you own the original.

For those (like myself) coming into Galaxy Trucker for the first time, I appreciate how easy CGE made it to get into the game, especially since there are several little rules to remember once you play the full game. Galaxy Trucker comes with a learning Adventure Deck (8 cards marked with a “L”) for your first game, and it even removes the sand timer and aliens to make things easier. For the learning game players will set up their ship, but will still want to move as quickly as they can because the person in first is king in Galaxy Trucker. Whoever finishes building first places their ship on the track in position number one, then each player falls in line on the spots behind. Often the Adventure Deck has perils, but it also has planets for picking up cargo and derelict ships from which to get money – and if you’re in the lead you get first pick! To counterbalance this, often picking up cargo or gaining credits costs you position, and makes you move backwards on the track.

Once the Learning game is over, players can boldly go on three levels of excursions, gaining credits and titles as they build new ships each level. This can be a lot of fun, but should someone’s ship fall prey to a large meteor in level I or II, it may be hard to impossible for them to catch back up to the competition. Speaking of, there is almost no player interaction outside of vying for the same ship components as you build, and jockeying for position once you take flight. You can’t attack opponents with your guns, or play any cards to slow them down. Fans who like “take-that” mechanics may not enjoy it as much as others.

What slowed me down more than that, however, is remembering every single rule for the various components and rooms in the game. For your first several flights you’ll want to keep the rules nearby for reference, but happily CGE did include a quick reference guide. The most frequently forgotten rule for me was to make sure I was spending a battery to use my shields every time – if it helps, any time you want to use a room on your ship with something green (double guns or engine, shield) you’ll need to spend a battery, which is also green.

About the third or fourth game I started to get comfortable building a ship that could withstand the dangers of space; doing the best to match up the pipes correctly while also balancing the different needs of the ship. Of course the best laid plans sometimes mean nothing in Galaxy Trucker, as one of my children found out when a direct hit made half his ship and all his engines fall off. Luckily game rounds are quick and easily reset, so even the most dismayed intergalactic transporter can try again soon enough. If you like tile-laying games with a little bit of random chaos thrown in, check out the new edition of Galaxy Trucker.

If you like tile-laying games with a little bit of random chaos thrown in, check out the new edition of Galaxy Trucker.