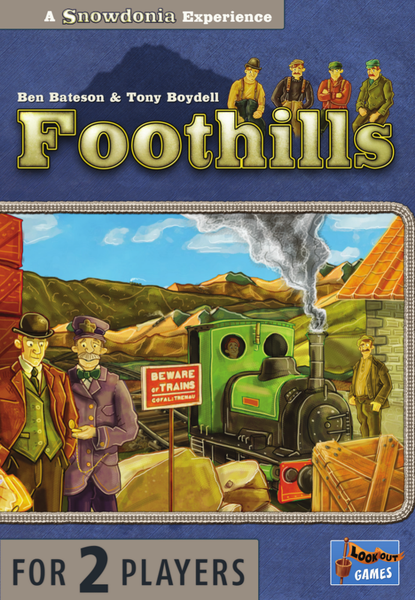 Foothills is 2-player game in the world of the popular Snowdonia. This card-based euro involves a clever action selection mechanic and a unique push-and-pull in its scoring. While not very complex, it is strategic enough that it seems to fit in the “gamer’s game” category.

One of the locations in the game is the pub, and its illustration shows a character drinking a pint.

I have not played Snowdonia, but I know many gamers who greatly enjoy it. Foothills is touted as “A Snowdonia experience for 2 players,” so even though I have no connection to the original, I’m sure that tagline alone will catch a number of eyes.

In this game, players are constructing railroads by clearing rubble, laying track, building stations, and enjoying the occasional cold one at the pub.

At the start of the game, 6 train lines are chosen from the 8 available to be used. They come in a variety of lengths, and each has its own unique features like double-cards, special segments of track, and bonus tokens. Each line begins with a number of rubble cubes (brown), which players must remove in order to put down track pieces.

Each player also has their own tableau, which includes 5 cards in their color, a surveyor pawn, and a track to record how many stations they have built. They also each have a supply of double-sided track/station tokens.

To play the game, players take turns selecting action cards from their tableau and using their abilities. There are 5 different categories of actions, A-E. As a general overview, the functions of each action are:

A. Collect resources from the stockyard, which can be used to build stations and perform card actions

B. Remove rubble from a card, clearing the way for track to be laid

D. Spend resources to build a station, receive its bonus, and take a special action

E. Move the corresponding surveyor pawn to an action space or the pub and take a special action

Perhaps the most interesting aspect of Foothills is its double-sided action cards. Each one has a gold side – its primary action – and a gray side – its secondary action. Whenever a card is used, it is flipped over, providing a new action in a different letter/category. This small mechanism infuses the game with a great deal of strategic potential.

Resource cubes usually come from the stockyard tile. They are drawn at random from a bag, 6 at a time, and refreshed only when the stockyard is emptied. However, mixed in with the regular resources are several white cubes. When a white cube is drawn, a “navvy” is placed on a railroad, which clears a card of rubble, but also blocks players from building track or station tiles there. This can be good or bad, and is entirely situational. (I actually like this mechanism a lot, because it keeps the game moving along by progressing the construction of the railroads.)

The other “most interesting” part of Foothills is the pub card. Using main action E, a player can move their surveyor pawn to an open space, including the pub, to use its action.

When a surveyor is placed at the pub, its owner can set aside an action card in their tableau to use for game-end scoring. This card is ostensibly “out” for the rest of the game, but its scoring ability is unlocked. This is a cool idea, because it essentially allows players to decide what they want to score points for. If someone is doing great at, say, collecting passengers, they can set aside a card that lets them score points for their hard work.

The game ends when either:

At this time, players total their points and the player with the higher score wins.

Foothills is an interesting euro with some cool ideas. It is not very complex – it comes down to little more than “play a card and flip it over” – but its subtle design nuances make it feel strategic.

Each action card carries a surprising amount of weight. I didn’t mention this before, but the cards are asymmetrical, so players must carefully consider 2 actions per card, not just 1. In addition to what each card does, players must also weigh how they could be used to score, if they can flip other cards over, etc. The experience of Foothills is not overly analytical, but it’s far from mindless.

The game’s production is nice, particularly the 3-dimensional buffer stops and stylized card artwork. For some strange reason, I really like the stockyard tile; it’s nothing special, but the fact that it is made to look like a wood pallet fits thematically, and I find it inexplicably charming. Though the railroad-building theme does not exactly scream “action-packed fun,” it works fine.

I think Foothills is a decent 2-player game. It’s reasonably fast to play (certainly under an hour), and it has some ideas that make it feel unique. It’s not my favorite game of the year, but I would recommend it to fans of light- to mid-weight euros.