Offense and defense at the same time? Yes, and it works! 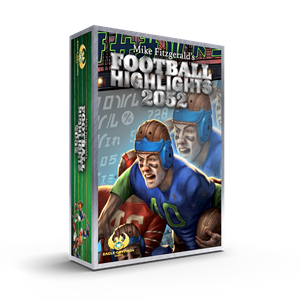 There aren’t many tabletop games that translate the sport experience to tabletop well. Football Highlights 2052 is one of the rare ones that manages to get the gridiron onto tabletop in a way that’s fun for both tabletop gamers and football fans alike.

The year is 2052, and the sport of football has evolved (or devolved?) back to the 1940s, where players play offense and defense, helmets are optional, and versatility is prized over specialization.

In Football Highlights 2052, each player takes control of a team and, in a tried-and-true formula, strives to score more points than their opponent. Opponents can choose their players using preset decks or perform a draft before the game. Football Highlights includes the following 4 teams: Dallas, New England, Philadelphia, and San Francisco.

Offense and defense happen simultaneously. It’s an odd concept, but it’s a great game mechanic. When players play a card (a play), they use the offensive and defensive side of the card. So player 1 plays a card for offense, player 2 plays a card for defense, and player 1 gains (or loses) the appropriate number of yards. Then, player 2 flips the card they played for defense to its offensive side, player 1 plays a defensive card, and player 2 gains the appropriate number of yards. This continues until each player has played 10 cards per half.

At halftime, players have the opportunity to draft new players for their team, which is another odd concept logically but turns out to be an excellent game mechanic. After the draft, players can choose which of the 5 players they drafted go into their roster, and which 5 players to cut. Then, the second half begins and play continues normally.

The simultaneous play, while at first difficult to grasp, works very well and turns into an exciting tug-of-war x2 and hand management. Maximizing your players is important, but how you maximize your players is up to you, and because the cards are both offensive and defensive, there’s often trade-offs. Do you sell out on offense, disregarding defense and hoping that you’ll win the ensuing shootout? Do you play stone wall defense and hope your meager offense is enough in the slugfest? A mix of both?

The back-and-forth nature of Football Highlights is fast-paced and exciting, and the decisions you make for how you play your players is a lot of fun. What’s great too is that each decision feels important because you’re moving up and down the field. Maybe you shouldn’t care too much about defense when it’s 2nd down and your opponent has a long way to go for a TD, but on 4th and goal, defense is important because a TD and a field goal are very different. It’s like a coaching simulation, only you know exactly what each play will produce.

The halftime draft, while odd thematically, is another great place for some strategy. Maybe your opponent is killing you with passes downfield? Draft some pass defenders… or you could try and beef your offense so it doesn’t matter how bad your defense is. The options are fun, and it doesn’t take too long, unless someone has analysis-paralysis over which players to cut and which to keep.

Football Highlights isn’t just number-crunching. There’s an appropriate amount of luck in the unknown of audibles, the draw of the cards per half, and not knowing exactly what’s in your opponent’s hand. For example, you don’t have access to all your players each game. You must put 5 of them facedown into an audible pile, and keep the remaining in your hand. When you call an audible, you replace the current player, offense or defense, with whatever you pulled from the facedown audible pile. This makes for more interesting decisions because maybe your opponent played a drive-breaking defensive card, but do you audible and make it even worse?

Aside from the standard 2-player mode, you can also play a 4-player tournament, season, and solo. The season mode is the same, only injuries are added. The solo mode is very good, and is actually quicker than the normal mode of playing (games can be between 20-45 minutes, depending on how long you want to consider your turn). You’ll play against a supercharged AI deck featuring a mix of game designer names (nice touch), and it’s just about as enjoyable as the 2-player game.

Components-wise, the cardstock is good, the box insert is excellent for storing what comes in the game, as well as any expansion packs, and the field board looks like a football field. The art somehow evokes the early days of football and retains futuristic flavor fitting for the game’s theme and name. The player names are fun too, as they are obviously mixed first and last names of NFL legends. You can also buy expansion teams. The one I have, Green Bay and Chicago, includes the expected nods to NFL legends in the players’ names.

Some situations during the game aren’t super intuitive, which means gameplay is interrupted by a few flips through the rulebook. After a few games players will remember the nuances, but what makes this especially frustrating is that the rulebook is not very well organized. Football Highlights is a difficult game to learn, not because it’s overly complex, but because the rulebook is poor. There should be more examples of play, a section that gives you all the rules, and a section that walks through a typical back-and-forth. The rulebook tries to do this, but it’s incomplete in too many places, leaving out some rules in the rules section that are included in the example section.

If you want exciting football moments in a tabletop package, look no further than Football Highlights 2052. You will find tantalizing decisions, heartbreaking (though not double-doinking) field goals, and a gaggle of gridiron enjoyment. Gamers not interested in football will find enough here mechanic-wise to keep them engaged, but it probably won’t be a favorite. As a football fan, if you can put up with some odd mechanics theme-wise and a poorly constructed rulebook, you won’t go wrong with Football Highlights 2052.

The options for quality tabletop football games are few, and this is the best one I’ve played.