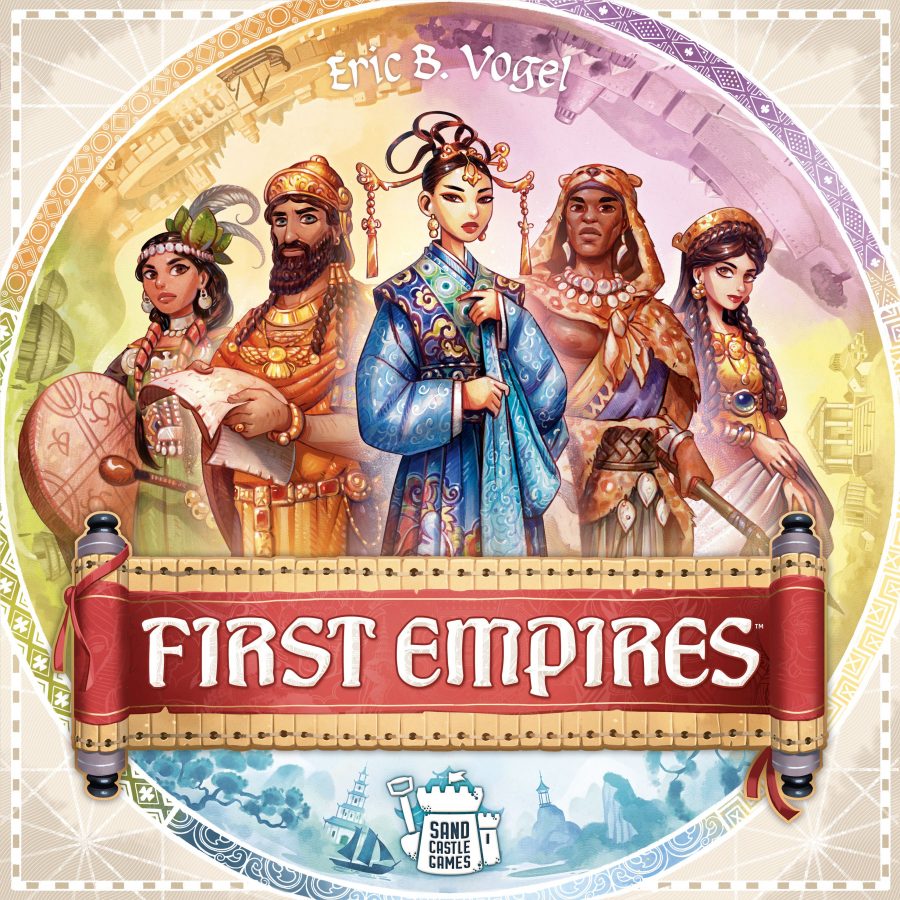 First Empires is the latest release from publisher Sand Castle Games, whose debut game Res Arcana was met with major critical acclaim. First Empires is a lightweight civilization game that plays in under an hour. Let’s check it out!

In First Empires, players take on the role of ancient civilizations vying for dominance. Each player has a personal tableau board which tracks their action allowances (i.e. how many dice they roll, how many rerolls they are allowed, how many movement points they get, etc.). As players expand their empires on a central map board, their allowances increase.

The goal of the game is to earn the most points. Points come from fulfilling achievement cards, advancing up the tracks on the player tableaus, and controlling areas of the board.

The yellow column dictates how many meeples the player has at their disposal. Once a player is done rolling, they can move their meeples about the board; the purple column shows how many movement points can be used. For each point of movement, the player can move 1 meeple 1 space. Meeples can travel across water but must end their movement on land.

When moving into a space containing opposing pieces, the active player must have more strength than their opponent—strength is determined by the number of meeples plus the number of black die results. The defeated opponent then collects their meeples from the contested space and returns them to a different space they control. (This makes First Empires reasonably friendly, as conquered troops are merely displaced, not killed.)

Next, the active player can advance the markers on their tableau. For each die rolled, if the player controls a region of the same color (e.g. if the player rolls a yellow and controls a yellow space), they can advance their matching marker. As their tableaus improve, players may earn immediate bonuses such as new meeples or extra achievement cards (which come from the green column).

Sometimes, players may also be required to place city tokens, which award 1-3 points to whoever owns them at game end. When placed, cities remain on the board, under their player’s control, until an opponent conquers their region. If this happens, the conquering opponent takes the city token and will score it at the end.

The game lasts 7 or 8 rounds according to the number of players. After the final round, players tally points from their tableaus, their cities, and their completed achievement cards. The player with the most points wins!

First Empires manages to condense what feels like a full civilization game into just an hour. It is easy to learn, and the gameplay moves quickly. Design-wise, the game is very clean and intuitive, in large part because pertinent information is always readily presented on the player tableaus. A quick scan tells the active player everything they need to know for their turn.

The gameplay is fairly tactical and confrontational—no surprise given that this is an area control game. Easily the cleverest aspect is the way players improve their tableaus. Since improvements are tied to both the die results and the regions controlled, players will often want to conquer certain territories based on which area(s) they want to improve. In turn, they have to balance this with the desire to complete achievement cards and conquer enemy cities. None of the decisions in First Empires are terribly deep—they are all based around die rolls, after all—but the interlocking game systems work well together and provide a satisfying experience.

The production of First Empires is very nice, on par with Sand Castle Games’ previous offering, Res Arcana. Vibrant colors and polished visuals give it an inviting quality, and the board and player tableaus are laid out thoughtfully for ease of use. All in all, another quality production from this publisher.

First Empires succeeds as a family-weight civilization game. Its simple ruleset can be taught in 5 minutes, which makes it very accessible to new gamers (more accessible, I would say, than Res Arcana). Admittedly, many aspects of this game feel derivative of other troops-on-a-map games, but the connection between board control and tableau improvements is clever and makes the whole thing worth a try. If you are interested in playing through the rise and fall of great civilization during your lunch hour, First Empires might be just what you’re looking for.

In some respects, First Empires feels derivative of other troops-on-a-map games, but the clever twist of board control being tied to tableau improvements makes it worth a play.