Live life a couple die rolls at a time... 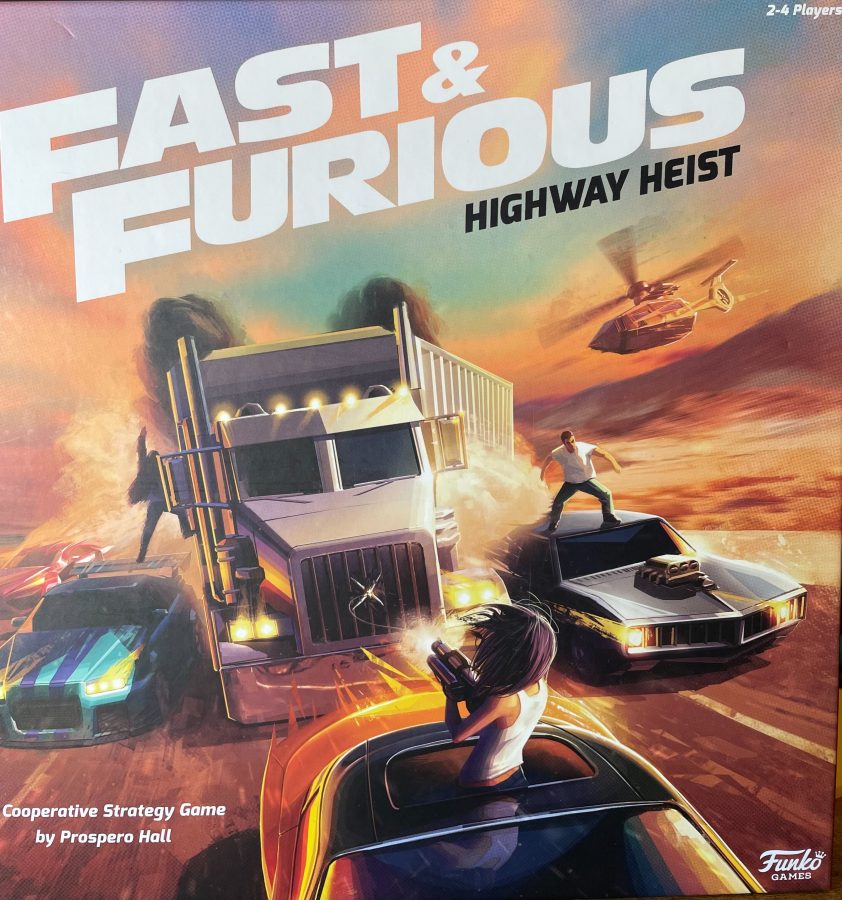 Fast & Furious: Highway Heist is a cooperative dice-rolling game by Prospero Hall. In the game, 1-4 players choose 1 of 3 scenarios, all of which see them racing down the highway and engaging in car-to-car combat, occasionally leaping from cars, and often causing copious amounts of wreckage in their wake. If that doesn’t sound fun then please feel free to go get your blood pressure taken, because you might be dead. For everyone else not seated on a cushion, read on for the review!

Play during F&F:HH consists of player turns where they’ll take up to 2 actions each, then roll the enemy die. Players can Drive and Leap with or from their vehicles without any die roll needed; they are only constrained by their Speed or Athletics ratings. They can also Ram or Force enemy SUVs, Shake enemy pegs from their roof, Brawl, Hijack, or Take a single Boost token as their final action. Boost tokens can be spent either before a teammate rolls to give them 2 extra dice, or after your own roll to turn all Boost symbols on the dice into success pips. The Enemy die can either move Enemy SUVs closer (or slam them into adjacent players), move Enemy cards triggering new effects, activating Enemy pegs on top of vehicles, and finally move the Main Enemy which also triggers Enemy cards. To top it off players also have a small selection of rotating Stunt cards, which allow them to do situational events like blow a hole in the side of the trailer or drive their car off a wreck and into the helicopter. Stunts are only available for a few rounds before they are discarded, and they reward players with Boost tokens when completed.

It might sound like a lot, but it’s quite simple: play the game like you’re in one of the movies. Drive cars like you stole them (sometimes you will) and ram them into the Enemy SUVs as often as possible to make things easier for your crew. The difficulty scales up with more players, and the rules also give tips on how to increase it more by removing certain stunt cards. Which, by the way, is a great way to make things easier for yourself – Stunt as often as possible. Not only does it get you more Boost tokens, but it’s sometimes the only or easiest way to defeat the Tank/Semi-Trailer/Helicopter depending on which of the 3 scenarios you’re on.

The game has a nice progression, too – it suggests starting on the Tank scenario, which is by far the most straightforward. Players just need to destroy the tank before the last Stunt card falls off the play area. In the Semi Heist, players need to jump onto the Semi and toss boxes of loot down to team mates, reminiscent of the original F&F film. In Chopper Takedown, players are tasked with destroying Shaw’s Chopper and car, all while juggling a Non-playable character who is constantly being targeted by the Chopper. I do wish that there were 1 or 2 more scenarios to choose from, but for the price I feel like that’s a minor note, not even a complaint. Speaking of price, while the MSRP is $29.99, if you look online you can often find it for less than 10 bucks.

Fast & Furious: Highway Heist is a fun, quick co-op game that will let you jump into the shoes of your favorite characters from the films and be jumping off wrecks in no time. It’s not a deep strategy game, but considering the source material I don’t think anyone was expecting a 4-hour car game. It does play like a light version of Car Wars, which if you ever wanted a post-apocalyptic Car-RPG you should check out. Fans of the films and fun co-op games should immediately hit the NOS and look for a copy of Fast & Furious: Highway Heist.

Fans of the films and fun co-op games should immediately hit the NOS and look for a copy of Fast & Furious: Highway Heist.