Review – Expansions for Dark Souls: The Board Game

Prepare to lie... down and read this long article. 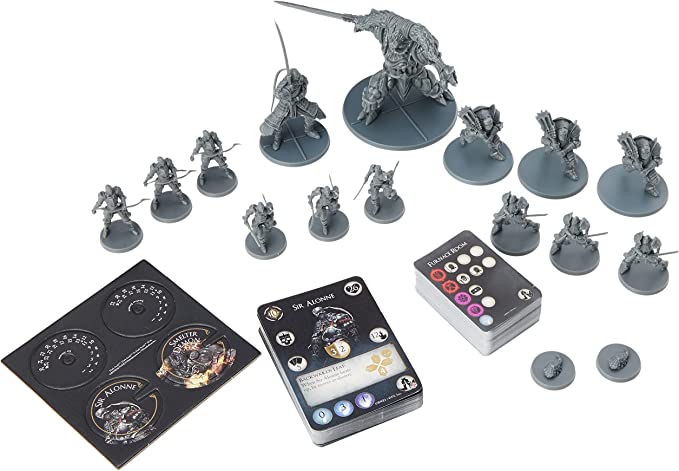 Before we get started, a few caveats:

Quick Thoughts on Dark Souls: The Board Game

We already have an extensive review of Dark Souls: The Board Game, so I’ll be brief.

As a Dark Souls fan, I enjoy it. As a general co-op dungeon-crawler fan, I think the negatives outweigh the positives.

First, the positives. The boss fights are the most fun boss fights I’ve played in a tabletop game. They are the most fun I had in this game, and it was real good fun. It’s great discovering familiar items, leveling up your character on the nice character boards, and strategizing who should take what weapon into battle. I wish more games used the stamina-health bar mechanism, where it’s 1 and the same. It really ups the tension when you decide to cast that big spell. The miniatures are excellent as well, and some of the expansions really do add cool content.

Now for the negatives. This game takes a while to set up, especially if you’re using any of the expansions. Not a deal-breaker, but I want it to be worth it like Jaws of the Lion is worth it. The basic enemy AI is terrible. The enemies you’re supposed to fight over and over are not interesting enough to warrant fighting more than 2 times in a playthrough, yet, without some homebrew rules, you’ll be fighting these guys half a dozen or more times. Also, the game does need homebrew rules to be playable. Otherwise you’ll sit down for a 3-4 hour slog.

Despite those negatives, I still enjoyed playing Dark Souls: The Board Game, even if it captured the die-and-try-again essence of the video games too well to work well on tabletop. I think games that require homebrew rules are usually not worth playing, but as a Dark Souls fan, this one is. If you’re not a Dark Souls fan, however, there’s a host of better dungeon-crawlers out there.

This is a tile set for the Darkroot and Iron Keep campaign expansions. It adds 9 double-sided game tiles that are functionally the same as the ones from the cores set but specifically themed for the 2 campaign expansions. I would have liked to see more Darkroot and Iron Keep-specific set-ups, or at least some different node set-ups because they’re all the same, which is a bummer given the rich source material. It does help set the scene though.

The Iron Keep expansion focuses on Dark Souls II content. It adds a mini boss in The Smelter Demon and a main boss in The Pursuer, as well as crystal lizards, items, 1 campaign, and more encounters and bad guys.

For the enemies, the Alonne Sword Knight, Alonne Bow Knight, and Alonne Knight Captain are essentially beefed versions of the Hollow enemies. They’re thematic, and they look cool, but they’re not mind-blowing. The Ironclad Soldier is the most interesting enemy here: he’s a slow tank who requires a lot of hit points to take down, but is also kiteable in that you can drag him around the map and dodge him while saving up for a massive blow.

For the bosses, the Smelter Demon looks phenomenal, even if his miniature stability is structurally unsound to my untrained eye. His attacks are strong, but are usually dodgeable, so expect to take a lot of damage at the beginning of the fight until you figure out his moveset. Sir Alonne is fun as well and will frustrate players as he jumps around the board with a few undodgeable attacks. The trick with him is just setting yourself up to attack his weak spot.

The crystal lizards are nice and make for some interesting decision-making because, in order to gain their upgrade item, players must take them out before they clear the room. Also, the crystal lizards run away, so using stamina on a lizard may seem like a bad idea when there’s still enemies lurking about, but the reward is tantalizing. David Carl and Alex Hall did a great job getting the crystal lizard from the video game onto the tabletop.

The miniatures are excellent all around, the card stock is fine, and while the new encounter cards and treasure cards don’t really add anything crazy, it’s nice to have added variety. However, variety and theme is really all you’re getting here. So if you’re a big Dark Souls II fan, this expansion could be great for you, but it’s going to earn a pass from me.

Mega boss expansions for Dark Souls: The Board Game usually add 1 oversized mega boss with behavior cards, a double-sided, fold-out gameboard which is used for the mega boss battle and a level 4 encounter, items for the players after they defeat the boss, and cards for level 4 encounters.

Old Iron King adds the mega boss of the same name. The Old Iron King plays much like in Dark Souls II, standing in lava and mixing swipes and fire breath. What’s interesting here is that Old Iron King’s fire breath targets specific nodes instead of the closest player or the player with the aggro token.

While the Old Iron King’s miniature is cool, this mega boss didn’t impress me much. It’s mostly a game of staying away from fire breath nodes and staying far away from the boss himself to not get swatted. Old Iron King is a thematic end to any Iron Keep campaign, but I don’t think he’s interesting enough to stand very well on his own.

The Characters Expansion adds 6 new player characters to the mix, offering some greatly-needed variety from the base game’s meager offering of 4 very similar characters.

The Deprived is the most basic character, without any great items or special abilities, but he does level up his skills faster than anyone else, allowing for the greatest flexibility; the Thief uses light armor and can heal 2 stamina and 2 health; the Sorcerer is privy to a once-per-spark use of an unlimited range spell for -3 stamina; the Mercenary is a master swordsman who makes use of a free second attack once per spark; the Pyromancer is perhaps the most fun because of his starting high-damage magic spell and once-per-spark spell buff; and the Cleric is a great teamplayer thanks to her healing spell

The Characters Expansion also comes with 10 miniatures for specific armor sets that players can replace their starting miniature with for thematic purposes. The armor sets are some of the most iconic Dark Souls armor, including Catarina, Havel, and Black Knight sets, and there are also treasure cards in here that players can find to match those armor sets.

While this expansion hardly adds any gameplay mechanics, the 6 new characters add a lot of replayability to the game, and the 10 armor sets and treasure cards add fun thematics as well. All 16 miniatures look great, and the 6 character boards are of the same quality as the original game’s. This is a strong expansion, and especially viable for extended campaign play.

The Explorers Expansion adds Silver Knight Spearmen and Firebomb hollow to the list of enemies, as well as a Mimic, Old Dragonslayer (mini boss, cards only), The Pursuer (main boss), a campaign, and a host of terrain miniatures.

The SIlver Knight Spearmen are a tough enemy, but not all that innovative, while the Firebomb Hollow enemies hit that sweet spot between the Hollow Soldier and the Hollow Crossbowmen, which makes them a great addition to the game. The terrain miniatures (treasure chest, barrels, bonfire, and gravestones) look great on the map and help make Dark Souls: The Board Game feel more alive than the cardboard tokens from the base game did.

The Mimic adds the potential for any treasure chest players find to be a Mimic, which acts as a tough mini boss and a yielder of great rewards if defeated. The Pursuer behaves as you would expect him to, which makes for a really fun boss fight that feels different from what you get in the base game. The Old Dragonslayer cards allow players to use the Old Dragonslayer miniature from the core game on its own as a mini boss, but he isn’t much different from what is in the core game.

The Pursuer is a lot of fun and a favorite boss fight of mine, the Mimic makes those treasure chests feel more like Russian roulette, the Firebomb Hollow actually introduces something new to the standard enemies, and the terrain miniatures look fantastic. So the Explorers Expansion is a pretty good one, right? It depends. If you want your game to look prettier, absolutely. However, that also adds to an already lengthy set-up time.

The Phantoms Expansion includes friendly summons, invaders, and 2 campaigns. Friendly summons help you defeat bosses with their own activation and move set deck (much like bosses). However, in order to summon a friendly phantom, players must sacrifice the souls they just gained from clearing the encounter before the fog gate.

Invaders also come with their own movesets and heat-ups, much like bosses, and essentially serve as mini bosses within a normal encounter. In general, invaders make an encounter more difficult, but also more fun because the reward for defeating an invader is gaining their special treasure item. Some invaders are tougher than others, and some are more interesting than others (Armorer Dennis was my favorite because he mixed ranged and melee attacks).

All 21 miniatures look great: the summons in their white pearl and the invaders in their crimson. The art is sometimes a bit weird on these because the screenshots of translucent summons in the video games doesn’t translate well onto cards.

While it’s good fun to fight alongside Solaire of Astora, this expansion doesn’t add anything else to the core game except the phantoms and the 2 campaigns. The most interesting of the campaigns is essentially an invader gauntlet, in which the players must defeat all of the invaders, which is a nice change of pace, even if the basic enemies get strikingly old. So if that interests you, this expansion could be great, but it’s certainly not necessary.

Most of these expansions are skippable, but if you dig the game, some are worth having.