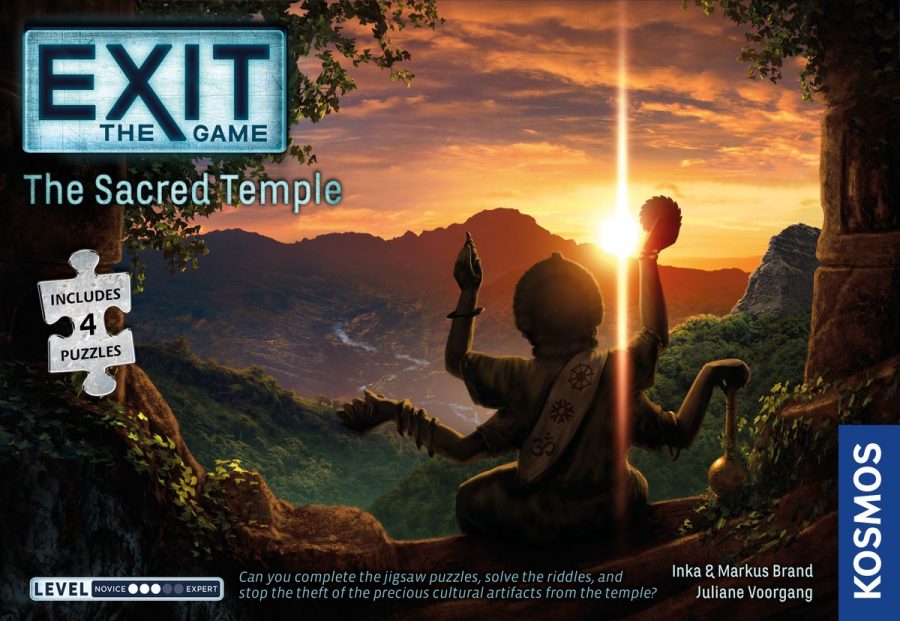 EXIT: The Game – The Sacred Temple is the latest entry in the blockbuster EXIT franchise. Like the other games in this series, The Sacred Temple is a one-shot escape room experience in which players write on, fold, cut up, or otherwise modify components. Unlike the previous entries, however, this one involves jigsaw puzzles! How does The Sacred Temple stack up to other EXIT games? Read on to find out!

It is always difficult to review escape-room-style games due to their reliance on secrecy and surprises. That said, though, EXIT: The Sacred Temple introduces a new mechanism to the series: jigsaw puzzles.

Now, as usual, I cannot go into specifics of gameplay for fear of spoiling the experience, but I will provide some basic, spoiler-free information. For starters, there are four jigsaw puzzles in the game, each full of visual clues and riddles. Unlike past EXIT games, there are no cards in The Sacred Temple; hints and solutions are instead found in the back of the rulebook. Accordingly, the dial works slightly differently than in previous games, but it will still feel familiar to fans of the series. Also, the game is not driven by a single booklet like other EXITs, but rather uses small folios for each individual challenge.

As for the game experience, it is longer than most EXIT games (two to three hours), largely because of the time it takes to put the puzzles together. The actual riddle-solving takes about as long as it does in other EXIT games, but the jigsaw construction adds an extra hour or so.

In a series that focuses so heavily on puzzles and riddles, jigsaws seem like a natural inclusion in the EXIT series. I can think of a few games that have used them in the past—Myst and Sunda to Sahul come to mind—but they are a very rare mechanism, likely because they offer no replay value. (After all, jigsaw puzzles typically have only one solution.) While this might be a problem for other games, though, it is no issue in the EXIT series, since these games have, by design, no replayability. This makes jigsaw puzzles a uniquely perfect fit; a one-shot mechanism for a one-shot game.

I have not tried all of the EXIT games, but of the eight or ten that I have played, this one ranks somewhere in the middle. I enjoyed it more than The Sunken Treasure or The Secret Lab, but it did not wow me as much as The Pharaoh’s Tomb or The Abandoned Cabin. I will say that the introduction of a new type of puzzle helps to keep the series feeling fresh, and it’s cool to see the jigsaw pieces used in unexpected and dynamic ways.

Fans of the EXIT series will want to check out The Sacred Temple, if for no other reason that its use of a new mechanism. It may not be the strongest game in the series, but it offers some unique ideas.

Fans of the EXIT series will want to check out The Sacred Temple, if for no other reason that its use of a new mechanism. It may not be the strongest game in the series, but it offers some unique ideas.