Review – EXIT: The Game – The Lord of the Rings: Shadows Over Middle-earth 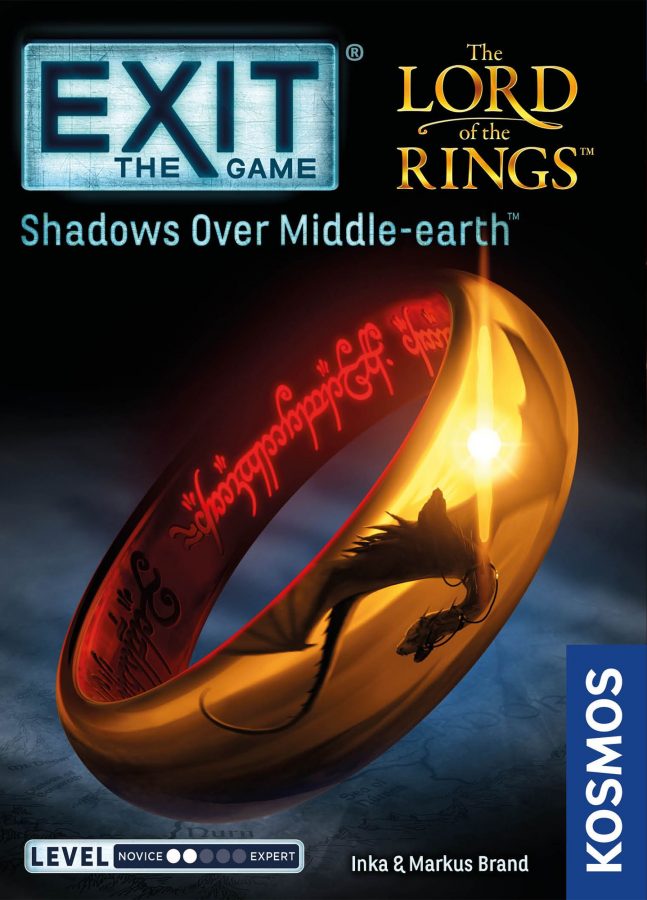 The latest installment of the EXIT series takes place not in an abandoned cabin or a secret lab, not in a pharaoh’s tomb or a forbidden castle. It takes place in Middle-earth (!), alongside Frodo and friends. Let’s see what those tricksy hobbitses are up to!

Having played at least a dozen EXIT games, I keep thinking that that series must have run its course by now, that there can’t possibly be any new ideas left. And I keep being proven wrong. In EXIT – Shadows Over Middle-Earth, players tread the path of the Fellowship, journeying from the Shire to Moria to Shelob’s Lair and beyond.

The game follows the now-classic EXIT formula, using the traditional game book, card decks, and decoder wheel. Players begin in Hobbiton and advance to new locations with each puzzle they solve. Now obviously, I want to keep this review as spoiler-free as possible, so I won’t go into specific detail about the puzzles, but here are some high-level things that stood out to me:

Looking back on all the EXIT games I have played (probably about half of the ones that have been released), this one ranks among my favorites. That’s not because of the theme—I care very little about Lord of the Rings—but simply having a strong narrative behind the puzzles enhances the play experience. The other entries in this series have loosely implemented themes like a spooky roller-coaster or an uncanny mansion, but they tend to feel generic and light on story. This isn’t a problem, of course, as the puzzles, not the story, are at the forefront of any EXIT game, but simply having a story gives the game another layer.

Fans of both the EXIT and Lord of the Rings series will find things to like here. I’m quite interested to see if other IP’s will find their way into this game series, and if so, how they might be used. It’s impressive to me that I have not grown tired of this series; it’s still great fun to see the surprises that lie within each EXIT box. As long as the designers keep putting out fresh content, I’ll be here for it.

Shadows Over Middle-earth is among my favorite installments of the EXIT series. For new players, it's a great jumping-on point, and for experienced players, it provides a fun batch of the puzzles that make this series so popular.