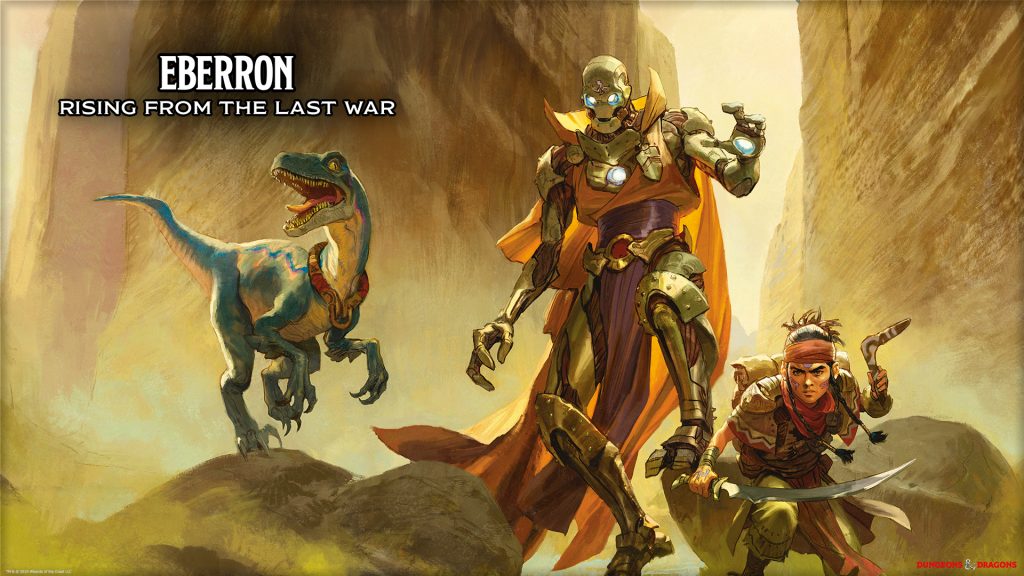 Eberron is a setting in the Dungeons and Dragons universe, dating back to 2005 in the 3.5 system. It is a sort of steampunk, sort of Bespin, sort of high fantasy magic, sort of mechanical realm where player characters can ride trains and airships while fighting warforged, mechanical fiends.

The setting was finally renewed with the late 2019 release of Eberron: Rising from the Last War, a 320 page supplement full of new mechanics, spells, feats, monsters, and more.

As with all D&D adventures and supplementary materials, Eberron sings the same old song: if you can’t deal with fantasy magic, don’t play the game.

The nice thing about D&D is that your dungeon master can tweak and tailor everything to the sensibilities of their players. If you aren’t comfortable with magic, let’s call it something else. If you don’t like the idea of false gods masquerading as real entities, your DM can nix them entirely.

While Eberron doesn’t put as much focus on the classic arcane magics of D&D, the content still bleeds the same blood.

As I’ve mentioned in previous reviews, I’m a newer role player and a newer DM. I haven’t played D&D since AD&D, and in fact started with fifth edition. However, when I hang around forums and digest podcasts, I hear plenty of old timers talk about the good ol’ days of Dragonlance and Eberron.

Now, Eberron exists as more than an unofficial document. It’s a real, beautiful book full of magnificent artwork and lots of new items and abilities to engage your players.

The world of Eberron thrives in a post-war setting where magic is pervasive in everyday life. Classic D&D includes magic as a normalcy as well, but this kind of magic feels more deeply ingrained into both culture and the physical structures built to house people and institutions. In some ways, Eberron draws on feelings similar to the world of Harry Potter, where even the stairs move, because magic runs so deeply in the design of the world.

While Eberron campaigns will likely thrive when players are running through a big city, the setting also allows for countryside questing and other, more classic, D&D adventure ideals. However, keep in mind the intrigue of factions clashing within city limits is probably where the most fun will lie.

After a day of questing, instead of setting up camp, a party could take a steam train back to town from a nearby depot. That very idea is so foreign to the current state of D&D, and I love how this can switch up how parties make their decisions. Even as I’m writing this, I’m imagining a weary party catching a short rest on an airship due to the city, only to be attacked by a warforged airship. This can introduce a brand new genre of plot points and random encounters.

I haven’t yet played a full campaign as a player, but just a quick skim through all of the new character options makes me excited for my players.

Aside from a ton of new feats and options for basic character creation, Eberron also offers the “Dragonmarks” system.  This ties your character to a specific house, which will offer that PC house-specific quests and rank-increasing opportunities. Dragonmarks exist almost like tattoos and offer sweet roleplaying opportunities. They can provide players with spells, fine-tuned ability score increase, and other power-ups. I very much dig this system. Anything that promotes the interaction of mechanics and theme is a winner in RPGs.

Eberron also provides class options for the long-awaited Artificier class, as well as race options for Kalashtar, Warforged, and Shifters.

The Patron system in Eberron is a resource for DMs to pull from when creating a sort of quest-giver NPC. To me, this type of NPC functions as the “I know a guy” character for your team. A patron could be a leader in a guild or House, or something your PCs create entirely. There are many options, but I appreciate the fleshed-out ideas the source book provides here.

So, Eberron is great. I generally prefer source books that give me a short adventure to run so I have a better frame of reference for the book, but Eberron wants you to take the book and run wild with it. It provides a ton of resources that can be dropped, at will, into your own games.

A review copy of Eberron: Rising from the Last War was provided by Wizards of the Coast.