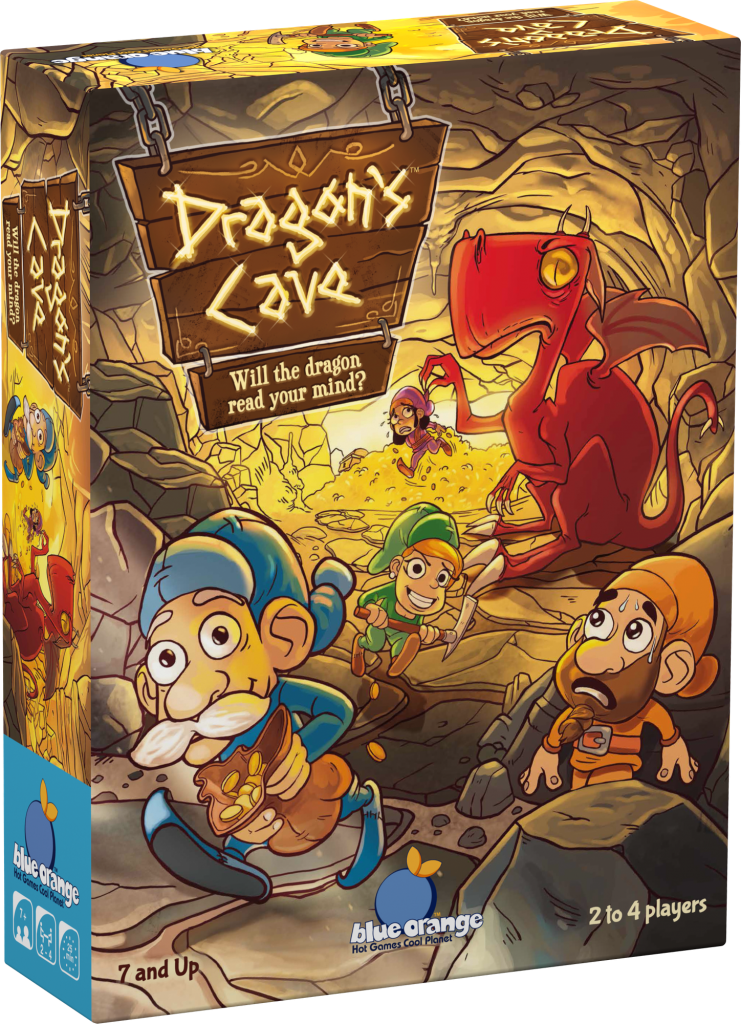 Dragon’s Cave is a lightweight game of bluffing and push-your-luck. Each turn, one player plays as the titular dragon, and the rest of the players act as explorers, trying to steal the dragon’s gold. All players choose a card to play simultaneously. The explorers want to avoid playing the same card as the dragon, or else they risk losing gold. With simple rules and a brief game length, it is good for families.

Blue Orange Games’ upcoming release Dragon’s Cave combines two genres I really enjoy: bluffing and push-your-luck. Both are well-represented in my collection, with greats like Sheriff of Nottingham, Can’t Stop, and Incan Gold.

The goal of Dragon’s Cave is to steal the most loot from the dragon’s stash. Each player represents an explorer, advancing through the cave grabbing shinies along the way. Throughout the game, players take turns playing as the dragon, doing their best to read opponents and predict their next moves.

Each player receives an identical hand of cards, a purse token, and a treasure chest. Their figures begin at the start of the board, and one player is selected to play as the dragon for the first round.

The turn structure is quite simple: all players secretly select a card from their hand to play, and they all reveal them simultaneously. Depending upon which card the dragon player chooses, each of the other explorers will have 1 of 3 outcomes:

A player who advances to a new space earns its reward, if any. When a player earns gold coins, they are placed on her purse tile; she does not officially “own” them until she spends her treasure chest card to stash them away safely.

By playing her treasure chest card, this player can stash all the coins on her purse tile away for safekeeping.

If the dragon “catches” a player, that player may lose some of her gold. She secretly distributes all of the gold on her purse tile into her two hands and holds them out. The dragon player picks one of her hands, and all gold in that hand is returned to the supply. The upside to getting caught is that the player may retrieve her played cards from the table.

Play continues until someone reaches the dragon’s lair at the end of the board. At this time, the player who has collected the most gold (in both her treasure chest and purse) wins!

Dragon’s Cave feels like one of Blue Orange’s “next step” games, alongside Kingdomino, Photosynthesis, and Planet. While still simple to understand, it provides something beyond their usual dexterity fare. (That is not to disparage their dexterity games, by the way; I like most all of them.) It’s just that this game offers decisions you won’t find in, say, Maki Stack.

The dragon player has to try to read her opponents, and vice versa. She knows what everyone’s movement options are, based on what cards have or have not been spent, so there is a psychological meta-game at play. It’s not brain-burning by any means—players only have a small pool of choices—but it’s interesting nonetheless.

I like how players have to divide their unclaimed coins between their two hands when they get caught. This introduces another fun aspect into the game. Players have to consider if it’s worth it to put all their unclaimed coins in one hand, essentially going “double-or-nothing” in hopes that the dragon picks the empty hand, or divide the coins between both hands, knowing that they will take a loss but retain something.

Dragon’s Cave looks nice on the table, with bright, easily-distinguishable colors and cool, 3D treasure chests. Its stylized cartoon look fits the spirit of the game well, and everything fits snugly back in the compact box. Overall, the production quality is high.

I had fun trying Dragon’s Cave, and I expect kids and families will, as well. It is a nice, light introduction to bluffing games—a sort of simplified version of Sheriff of Nottingham. It is a good tool for teaching younger gamers about principles like risk-taking and reading opponents, but I even had success playing it with an all-adult group. If Dragon’s Cave sounds like your cup of tea, definitely check it out.