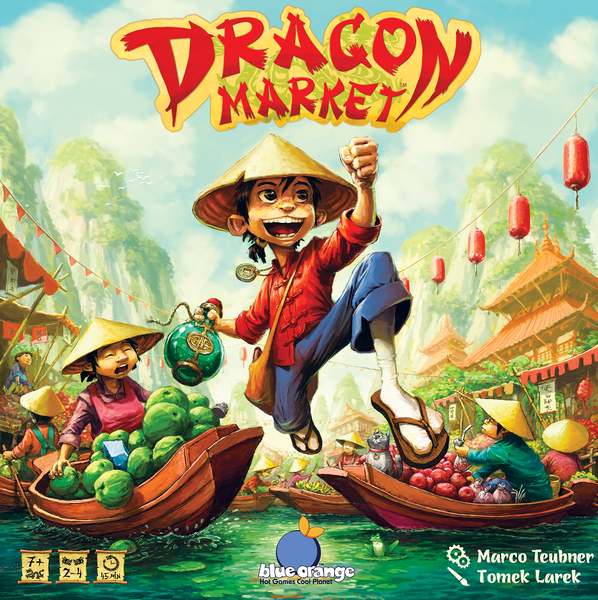 Dragon Market is a puzzly game about moving and rotating boats, while collecting the goods they carry. It is a very light game, but it offers an interesting spatial challenge.

Dragon Market feels like a combination of the classic video game Frogger and the popular Binary Arts puzzle game Rush Hour. It is a cool-looking game with a very simple concept: a bunch of boats are carrying different items, and players move and manipulate the boats to collect certain sets of them. The goal of the game is to be the first to fulfill the requirements of 2 cards.

To begin the game, players take turns placing boats on the board. Boats are 3 spaces long, and each one has a pawn attached to it.

Each boat receives unique item tokens in its empty spaces, and player pawns begin on the corner spaces of their color.

All players start with an objective card that shows a set of items for them to collect.

On a player’s turn, she begins by rolling the 2 dice to determine how many actions she will receive. The die faces show results of 3 and 4, so she will receive between 6 and 8 actions per turn.

Each action can be spent to:

When rotating boats, they must have complete clearance to move; that is, there cannot be an obstacle in the way. If turning a boat would make it collide with another boat, it cannot be rotated that way.

When a player moves her pawn onto a boat space containing an item she needs, she may take it for free. Players can move through each others’ pawns, but not through neutral pawns. When she has collected all of the items required by her card, the player heads back to her dock. Once she successfully reaches the dock with all required items, she receives a new objective card. If she completes this second card, she wins!

If a player does not use all her actions in a turn, she may save unused action points for a future round. She can spend them to gain up to 2 extra actions on a later turn.

Dragon Market is an interesting spatial puzzle. At first glance, the game board does not seem like it would be terribly tight, but players will quickly realize just how little room they have to rotate and maneuver boats, especially ones with the pawn on the end (since they need a wider area to swing).

Gameplay is quite tactical. The strategy largely depends upon how the board looks at the start of a player’s turn; there is little room for pre-planning. To that end, I found a couple of potential issues with Dragon Market.

First, I’m not sure that the dice are necessary. They always grant 6-8 actions, so it might have been a cleaner design choice to just give players 7 actions flat, no rolling required. Of course, the element of random chance keeps things interesting, because one player might get more actions than another on a turn, but over time, it should tend to even out, which makes the dice rolling feel unimportant.

Additionally, the starting positions of the item tokens can matter a lot, perhaps too much. Given that items are randomly distributed among the boats, it is possible for a player to have an immense advantage, if the tokens she needs happen to begin very close to her. Though unlikely, a player could complete an objective card in one single turn, while another player – by no fault of his own – could have to chase down items scattered all over the board.

Now, to be fair, this too should statistically even out over time, but unlike the difference of 1 or 2 actions on a die roll, which is fairly negligible, players need only complete 2 cards to win. Therefore, if someone gets a lucky card draw, that’s half the game. (I should note that the advanced version of the game addresses this issue by giving players 2 cards, from which they pick 1 to keep. In my opinion, this should have been the standard rule, rather than a variant.)

As is always the case with Blue Orange, the production quality of this game is excellent. The boat tiles are very cool, the dice are nicely stylized, and the pawns have an attractive, tactile quality. The rules are clear and concise, and the box insert is perfectly designed.

Overall, I found Dragon Market to be okay, but it didn’t wow me. Its core puzzle is enjoyable, but I wish it went deeper strategically. Personally, I will stick to other Blue Orange titles.