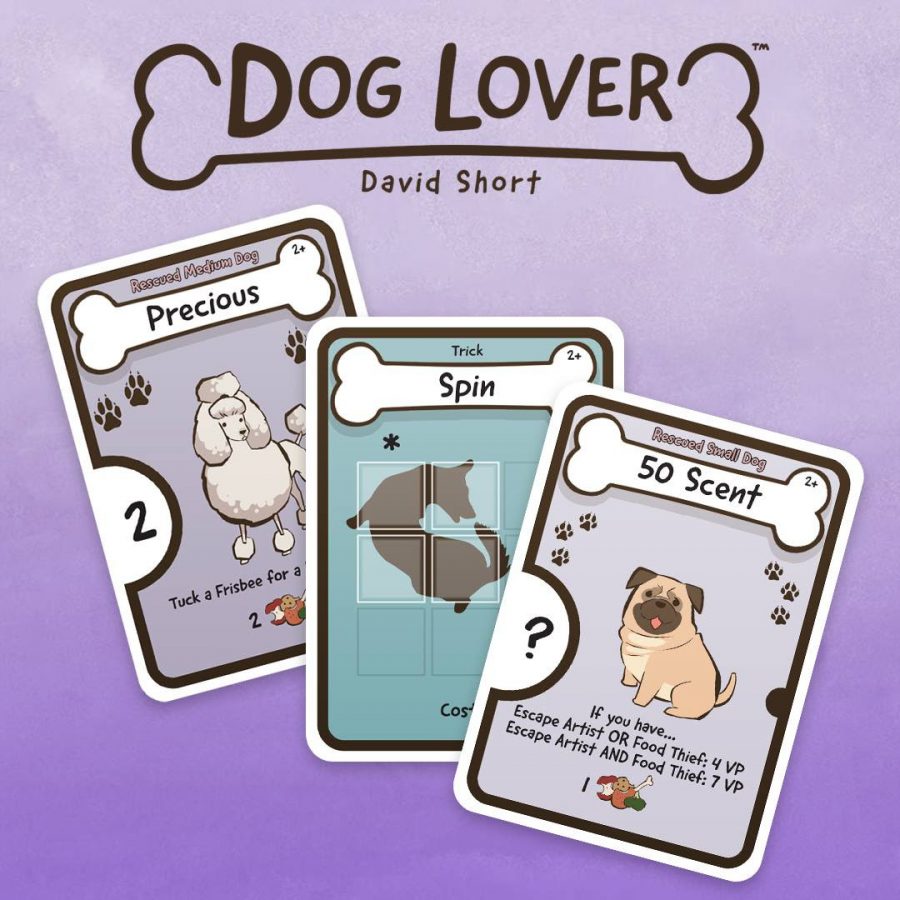 Shortly after my wife and I were married, we adopted two cats that are still with us. And despite my children’s protests, I have maintained that we will never be a dog home. Sadly, the fight rages on, and now the fight has even hit the board game table. Dog Lover is the sequel to 2017’s Cat Lady, which was one of the first “real” board or card games that my oldest daughter ever took to, so it holds a very special place in my heart. How does Dog Lover compare?

First, let me give some perspective on Cat Lady. I absolutely adore the original title, and find it just the right amount of complexity for an introductory game for new gamers or older children. It’s a great step up from other card drafting games like Coloretti or Sushi Go!. It really needs player aids, which somehow still wasn’t added in the expansion, and the tiny bit of ambiguity about cards staying in hand versus being played (Food cards in particular) is a non-issue. Box of Treats was a mostly superfluous addition that needlessly complicated the game, and looking back, my score for it is probably too high.

But if Box of Treats went overboard, Dog Lover jumps all the way past the ship and over the shark. While it is founded on the same principles as Cat Lady, a ridiculous number of ideas are crammed into the same space, many of them bad ideas, at the cost of game balance.

The biggest change is the addition of Tricks, which allow you to take cards from the grid in different ways. This is a cool concept in theory, and simply dealing players a special Trick (an advanced rule for after your first game) would be interesting enough for me. But the game instead allows players to buy extra tricks by discarding Dog Training cards, and some tricks allow you to take even four or five cards from the grid at once. This is a great idea in theory, except it ruins the basic idea of Cat Lady’s cat token, where you cannot take from the same row or column as the previous player. Now, the rule is that you cannot take two or more cards from that specific row. What this means is that, you might spend 3 Dog Training cards to get that amazing Trick that lets you take five cards, but quite often you can’t play the trick because covering over half the grid means that the Watch Dog token is bound to be in your way. There’s a fundamental rule of game design I believe in, which is this: if rules questions are frequent and almost always end with “no, you can’t do that,” then your game design is flawed. Being told the fun move is illegal, well, it isn’t fun.

The other game concept that isn’t fun, or at least not when I’m trying to introduce new players to the hobby, not grizzled veterans looking for another punishing game of Heavy Dry Euro Game X, is that players don’t want to be punished. But the new “Trait” cards which take up a considerable amount of space in the deck do just that: when you take them, you have to attach them to an appropriately-sized dog (small, medium, large – yet another new concept), and if you cannot, you lose the Trait card and some other item (maybe Food, maybe one of your Favorite Things which are like Cat Toys from Cat Lady, maybe something else). Frankly, this sucks. It’s not especially fun to have your options narrowed even further when the Watch Dog is already blocking all of your cool tricks. But Derek, you say, it’s a good thing if you have that kind of dog!

And now we get to the worst part of the game, where the game is literally imbalanced. I went back and counted all of the cards for two players in both Cat Lady and Dog Lover. Cat Lady has 77 cards, 2 of which are removed randomly to start, while Dog Lover has 75. Cat Lady has 17 cats, 9 adoption cards (a pair will net you a Stray Cat), and 26 food. Meanwhile, Dog Lover has 8 adoption cards and 24 food – very close ratios to Cat Lady – but only 9 dogs in the deck! And yet they’ve been replaced by cards that require you to have dogs to use. This is so completely bizarre and confounding and frustrating. Did no one do the math? It’s like a beginner Magic: the Gathering player trying to shove 20 Auras and 3 Creatures into one deck and expecting things to work out.

Furthermore, these new cards suddenly require players to be careful about hand management, which was never a thing in Cat Lady, making the game more accessible to elementary school children. Now there are specific rules on tucking cards, attaching them, and so on, and well, the whole thing is a frustrating mess. And of course, we still don’t have player aids, when we need them twice as much as before. Meanwhile, even the score pad is vague and unhelpful, as there are too many weird ways to score points “adjacent” to each dog now.

Look, I recognize that it is very, very difficult to make a simple, family weight game that is accessible and interesting and fun to play. But in this case, the formula was already laid out in front of you in Cat Lady, the only reason this game exists in the first place. All it took was some very minor tweaks to the original, and this could have been one of my favorite games of the year. Instead, this is easily the biggest disappointment of 2021.

On the bright side, enough core concepts from Cat Lady are there that I will be able to salvage the game for two players. I’ll be using some of the 3+ and 4+ cards to make a 2-player deck that uses a better-balanced ratio of cards, and removes some of the needlessly complex concepts. And hopefully, I’ll only have to bring that out when my daughter insists on playing this over Cat Lady.