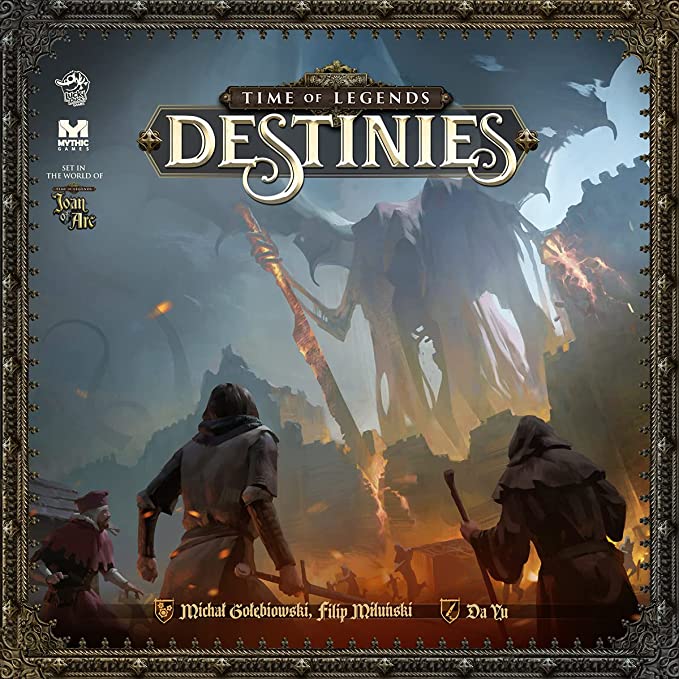 Destinies is an app-run RPG experience for 1-3 players using Lucky Duck Games’ Scan&Play technology. Is it a solid substitute for an RPG when you don’t have a dungeon master, or is it a clunky, forgettable experience? Read on to find out.

Players will explore the map, complete quests, interact with characters, and defeat bad guys over the game’s 1-scenario opener and 4-scenario campaign. Whoever fulfills 1 of their 2 destinies first and completes their finale wins the scenario!

While nothing graphic is shown on-screen, there are some fairly graphic descriptions of fights. It’s not overly blood-lusty, but it’s something to be aware of. The overall tone is generally dark because most scenarios feature a dying town plagued by rats or illness or things of that ilk. Some items are dark or grotesque, and there are tarot cards players can purchase and use in a few scenarios.

There’s a surprising emphasis on doing good deeds for an RPG like this, and while you can stil run around and do whatever you want, it’s often to your own detriment. There’s no mention of the gospel here, and the salvation hinted at seems to be primarily good-works-based.

On your turn, you will refresh an effort die, move, and interact with a point of interest or a character. The app will display the text and the different options for you to select, but they usually take the form of: asking a character about something, doing a location-specific thing (stealing, praying, listening, etc.), asking someone about your destiny, fighting, or performing some sort of skill check.

When you perform a skill check, you always get your 2 white dice, but you can also add any of your refreshed effort dice to give you a better chance of success. Then you’ll enter your successes into the app, and you’ll get an outcome based on your number of successes. This is a great way to give players different results for doing the same thing, and it also helps scale certain fights: defeating a rat is pretty easy, so you should only need 1 success, but defeating a demon is a bit tricker, so you’ll likely need 3 or more.

The map starts small, but as players explore, it expands over the table with new map tiles and miniatures and points of interest for players to interact with. It feels like a real world, especially when players’ turns are interrupted with a wolf murdering a peasant or bandit attacking the east farmhouse. Each map feels like it belongs specifically to that scenario, instead of scenarios reusing the same map tiles as other scenarios.

The leveling system is different from what I’m used to, but it’s simple enough to explain easily, and it works great for Destinies’ overall design, so hats off to Michał Gołębiowski and Filip Miłuński for coming up with a unique, versatile, and accessible system. Essentially, as you level up, you can choose to make yourself stronger in certain skills so successes are easier to come by. It didn’t knock my greaves off, but it works very well.

Once you have completed 1 of the destinies on the back of your character card, you’ll go to the specified location to begin your finale. When you enter your finale, you can’t leave, so it’s essential to prepare for it. There are many items for players to discover in Destinies, and it’s a lot of fun trying to build your character so he can complete his finale before the other players complete theirs.

Before each game, the app will read aloud a few paragraphs of flavor text to set the tone for the story. The narrator is good, and the text itself does a great job of establishing the scenario’s setting and providing a bit of backstory. Players will then read their character’s destinies (carefully linked with the introductory text), find their characters’ miniatures, and set their skills. Each character has 3 skills which can be leveled up throughout the game and a starting item.

The characters’ finales encapsulate the overall feel of Destinies well: the narration creates an exciting mental-movie in your head, and the gameplay mechanics, skill checks, and cards, while they don’t enthrall, remain interesting enough to not distract from what’s going on in the story. Each player is involved in their own story, so hats off to Destinies for balancing up to 3 stories going on at once, but that also means there are limited opportunities for player interactions, so everyone’s essentially playing a solo game.

And that’s what Destinies is all about: the story. All 5 scenarios are unique, and they all have their own little surprises and even some truly special “wow” moments. The leveling system and skill checks are the most interesting bits of gameplay mechanics, but without the story the cumulative gameplay experience would be just okay, and that’s okay because each story felt like a fantasy novel I wanted to read.

Destinies’ app is an essential part of the story that the players play through, and it does a great job of playing appropriate background music depending on what location your character is at. The app is user-friendly, even for newcomers, with no major glitches. The tablet seems to be the most accessible app medium gameplay-wise, but the app works fine on a laptop or phone. The Scan&Play technology works great, and it’s a ton of fun trying to figure out what all you can use your items for.

Of course, as with any game, there are glitches in the app, but as of this review, Destinies doesn’t have the luxury of being a recently-released game where bugs are expected. It’s about a year old, so when dialogue options that should be hidden open up, it’s less excusable. It didn’t happen often, but it does take the players out of the narrative experience because instead of thinking about the story, they’re thinking, “Narratively, this couldn’t be happening.”

While Destinies claims that it is difficult to guess what your opponents’ destinies are, that’s simply not true. I was able to guess my opponents’ destinies within a few turns of our first game, and that trend continued throughout all 5 scenarios. That’s not a deal breaker by any means, and it honestly made me more invested in their turns because I knew what they were trying to do, but it also takes away from the intrigue of the game. There’s also an argument here that, thematically, it makes sense. If you’re someone running around town, trying to storm the castle, you’re going to notice someone else running around the town, trying to stop you from storming the castle.

However, one major problem with being able to listen in on other players’ turns is that if you fail a test for an item you need in order to fulfill your destiny, someone else can easily swoop over there on their next turn, be fully prepared for the test, and take the item before you have a second go at it. Mechanically, it can be a fun, in-your-face move, and I suppose there’s thematic justification for it as well. The guard you failed to hoist over a wall would likely let someone else try and hoist them over well instead of letting you try again, but there’s still the issue of how the other person found out he needed to be hoisted over the wall in the first place. These are nitpicky issues, but they’re worth knowing about because the players I played with had mixed feelings about these mechanics.

The components in Destinies are of a surprising quality. Each player has a player board with indentations for coins, XP, and level points, as well as slots for their item cards. The art is engaging and fits right in with the dark theme. Now, I wondered how Lucky Duck Games fit 31 miniatures into such a tight package, and soon after opening the box, I had my answer: of the 31 miniatures, 1 is oversized, 4 are normal, and 26 are quite small indeed. The small miniatures feature a surprising amount of detail, but they are small and can be easy to lose track of on the world map.

There’s a lot in Destinies, but the app does so much of the work that the game’s themes become more of a barrier for younger players than the actual gameplay does. Lucky Duck Games did a phenomenal job of packing an epic, dungeon-masterless RPG experience into a 2-hour board game that can be taught in under 4 minutes.

I don’t see myself replaying Destinies anytime soon, unless I picked up an expansion. I could see myself replaying it in a couple years, but even without immediate replay value, Destinies is such a unique experience that if you’re at all interested in exploration, role-playing, or narrative-driven games, I encourage you to check it out. There’s so many stories in here, so many different characters, and it’s not going to put a mental strain on you like Gloomhaven, Massive Darkness, or Imperial Assault will. Despite the occasional hiccups, it’s a wonderful time, and the closest thing I can compare it to is King’s Dilemma, which gave me my favorite tabletop experience so far. If you can get a group together, try it and see what you think.

A great, dungeon-masterless tabletop RPG narrative-driven experience that's worth a try even if immediate replay value is low.