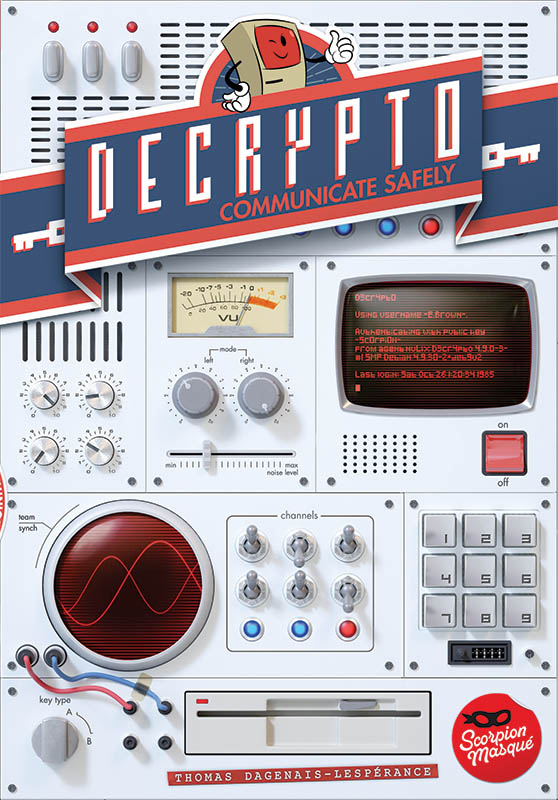 Decrypto is an upcoming release from Le Scorpion Masqué/IELLO, in which two teams of players must use word association to figure out the opposing team’s secret code.

Move over, Codenames. I never liked you that much, anyway. Decrypto is where it’s at.

Decrypto is a very unique word association game, in which players divide into two teams, and each team receives four secret words with numbers corresponding from one to four. All players on a team can see their own words, but the other team cannot; they must use inference and deduction to try to figure them out. A team’s tableau may look like this:

Every round, one player from each team is designated as the Encryptor. This player draws a secret card that lists a three-digit code, containing numbers one to four. If the code is, say, “2-4-1,” that player will have to give clues that lead her team to guess the second, fourth, and first words, in that order. (In the above example, this would be “Autumn-Germany-Tooth.”) The trick is that the clues need to be simple enough that one’s own team can guess them, but challenging enough that the other team cannot infer what they might be.

The ultimate goal of the game is to intercept two codes from the opposing team. Each round, both teams try to guess their own code, but they also get to hear the clues given by the opposing team, which help them to narrow down what their secret words might be. Every round after the first, teams can try to guess their opponents’ code based on the clues they hear. If a team guesses their opponents’ code correctly, they score a point—one of the two they need to win. However, if a team guesses their own code incorrectly, they receive a penalty point—one of two they need to lose. (There is no bonus for guessing one’s own code correctly, nor is there a penalty for guessing an opponents’ code incorrectly.)

As an example of how the word association might work:

If you’ve ever played Dixit, you’ll know what I mean about making clues just difficult enough. It’s tricky to hit that sweet spot, and that’s why it’s fun. Similarly, if you’ve ever played Codenames, you’ll know that the more words a player tries to incorporate under one single clue, the more cryptic and “out there” things can get. Decrypto does a great job of mixing these two notions. Like these other games, it helps to really know the other players at the table. How do they think? How will they interpret clues?

There is also a great deal of room for clever wordplay and intentional misdirection. In a recent game, my team had the words “Compass” and “Heaven.” The game had been going on long enough that both teams had a pretty good sense of the other’s words, so my teammate gave us the clue “Cardinal.” His hope was that our opponens would think “cardinal direction” and go with “Compass,” and that we would see the double-meaning and think “Catholic Cardinal,” and thus go with “Heaven.” (Spoilers: we didn’t.)

In a different game, my team had the words “Sword” and “Spear.” As you’d imagine, this was extremely tricky, but I found it was tricky for both sides. On our end, we had to give clues that were specific enough to point to a particular card (we couldn’t just say “Weapon,” for example), but not so obvious as to give anything away. On our opponents’ end, they had to differentiate between clues that probably sounded very similar (for example, “Blade” vs. “Impale”). It’s moments like these that make Decrypto challenging and rewarding.

I really, really like this game. Where I always found Codenames bland and uninteresting, I find Decrypto clever and entertaining. It puts a very unusual spin on traditional word association. It’s neat how, as the game goes on, players have to think increasingly outside the box. The more information a team gains about their opponents’ words, the more the opponents must stretch their clues to foil interception attempts.

The production quality of Decrypto is awesome. I love that the game uses that classic red decoder. The game comes with a plethora of word cards, so every game will feature a new set. The only downside I see is that players might run through the clue sheets quickly, since they’ll use two per game. My group used about a quarter of them in a matter of a few nights. I will most likely laminate some of them and use dry erase markers to make them last longer.

Decrypto absolutely replaces Codenames for me; it’s not even a competition. This game is awesome—easily the best word game I’ve ever played. Every single person with whom I’ve played it has loved it and wanted to play again immediately. I predict this will be a smash hit in 2018—one that will rocket up the charts on BoardGameGeek. I cannot recommend it highly enough. (The only caveat is that it is better with more players; so far, six seems like the sweet spot.) Definitely check this one out.

A review copy was provided by IELLO.

Decrypto is an amazingly fun party game. I highly recommend checking this one out.