Here there be dragons...and shipwrecks 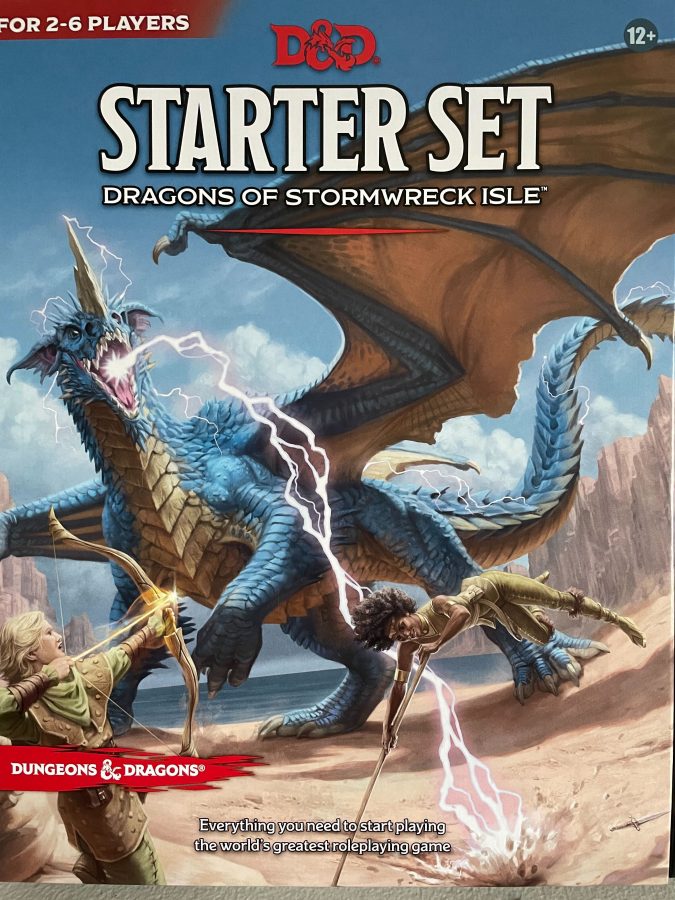 The newest D&D Starter Set: Dragons of Stormwreck Isle (DoSI hereafter) is out, and much like previous versions, it contains the basics needed to get 4-5 adventurers out the door and down the beach to adventures unknown. In the box is a 48-page adventure with a small bestiary in the back, a 32-page rulebook for anyone completely new to tabletop role-playing games (TTRPGs), 5 pre-generated character sheets, and 6 dice for either everyone to fight over or that one player who always forgets to bring theirs. So, is it all that and a bag of dragons? Read on for the review!

In the adventure, the players might run into or fight zombies, kobolds, dragons, harpies, owlbears, and other creatures. Players will have to use either their social skills or combat skills to resolve most encounters, and depending on their class and abilities, they may have to use weapons, spells, or other fighting means to defeat or evade their enemies.

You only need dice, a pencil, and your imagination to play a role-playing game. In their most recent starter kit, Wizards of the Coast seem to have taken that idea to heart as DoSI comes with only the bare bones to get an adventuring group up and running. For what’s there, it isn’t too bad, but compared to something like the Essentials Kit, which comes with a rulebook twice as long, double-sided poster map, DM screen, 11 dice, and 81 cards, DoSI just seems… small?

The adventure itself on Stormwreck Isle is a decent starter, introducing players to the inhabitants of the island and giving them a couple nonlinear quests to cut their teeth on combat and social interactions. Players will arrive via boat, each with different reasons for visiting, based on what’s on their character sheet, and right off the boat have a chance to either fight some zombies or tactically retreat (based on my experience, almost everyone will throw down). After that, they will be able to explore the settlement of Dragon’s Rest, meet some important characters like Runara (a powerful dragon that can save the characters should they get in over their heads) and possibly do some side-quests.

Chapters 2 and 3 of the Adventure take the party to different locales on the island in need of special adventurer attention (things needing to be dealt with and or killed), and I like that they can be done in either order depending on where the party wants to go first; the rules even include options to make the fights or events harder should the party be leveled higher because they did the other one first. There’s also many different side-quests and events that the GM can throw in along the way, from kobolds and owlbears to dangerous hot springs.

The clifftop finale, like the other main quests, even has a few different solutions depending on the resourcefulness of the party, and upon completion leaves the island open to more exploration should the characters wish to do so. I do feel that the adventure is a little shorter than most D&D fare, as they usually seem to feature a 5-act structure. So right when I got to the finale I was expecting more, but it was over. On the plus side, if the players take advantage of all the side-quests the island has to offer, it will fill at least 2-3 sessions and get them up to level 3.

If you balance the cost of the DoSI kit against a set of dice, you’re still getting a good deal. It just doesn’t feel like as good of a deal as past D&D kits or the Pathfinder Starter Set, which usually includes a big double-sided dry-erase board and a GM screen. DoSI also has a large white cardboard spacer that takes up half the box, furthering the disparity. However, you’re still getting a quality (albeit short) adventure and a fun introduction to the most popular TTRPG out there, so if someone in your life needs a new role-playing game, this isn’t a bad way to start.

Not a bad place to start, but past starter kits have included more for your value.