Dragon War is upon you, whether you would risk it or not. 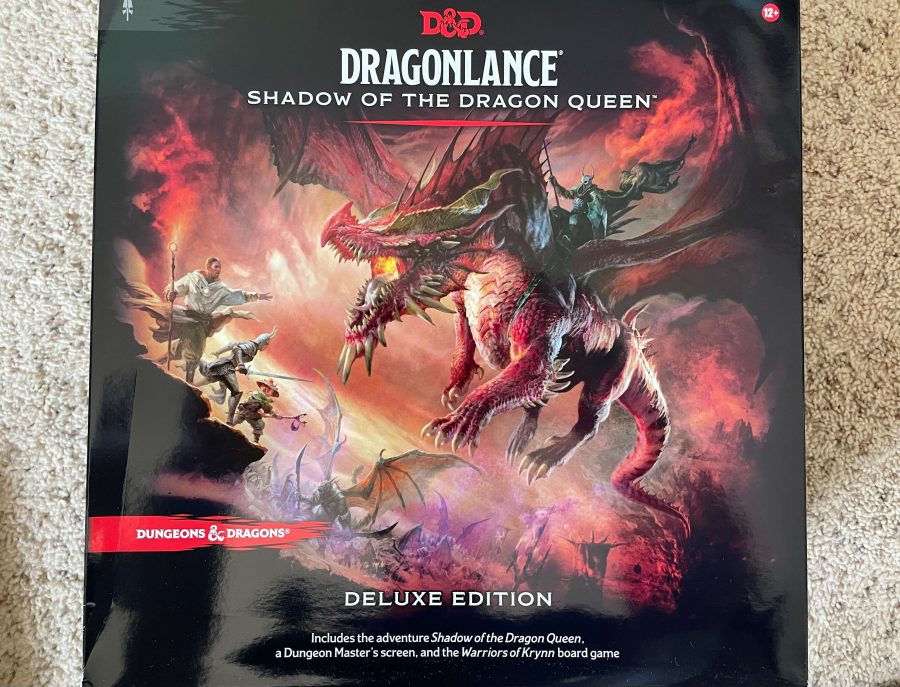 In Dragonlance: Shadow of the Dragon Queen players will get to help the people of Krynn as they brace for war against the formidable forces of the Dragon Queen. In the book players will have the chance to make new characters, rescue villagers, join an army, survive the Northern Wastes, raise (or raze) a lost city, and finally take on the Dragon Queen’s main forces and their deadly magical weapon. The adventure can take players from level 1 all the way up to 10, so is it worth the trip? Read on for the review!

This D&D adventure features a lot of dragons, war, fighting, battles, undead, dragonkin, and magic. Not to mention the usual things that show up in RPG’s. Most of the pictures in the book feature action, but no direct acts of violence i.e. characters lying in wait to ambush, but not someone getting stabbed.

Dragonlance has an impressive range of challenges for players, albeit many of them are combat-based, and it’s also noteworthy that the book can take players up 10 levels. Most books in the past have only been 5 or 6 levels at most, and each of the chapters in the book could easily turn into 2-3 sessions, so this book has some of the biggest bang for your buck when it comes to RPG supplements in the D&D line. And DM’s may want to take their time – there’s a lot of backstory about the cataclysm and past wars, that may be of great interest to your gaming group… or not. Just be sure to give yourself plenty of time to read and share the material in a way that doesn’t get players lost.

The book starts in the usual fashion with background, history, and character creation options, but has a unique addition: Preludes. Preludes are short encounters designed for 1-2 characters with specific backgrounds, or inclinations, and can give them small insights into the world they’re about to dive into before the adventure starts in earnest. After the Preludes are done, the characters head to Volger for their friend’s funeral, which kicks off the Dragonlance adventure with a battle reenactment that gets a little too real, followed by an emergency evacuation of the town. As the players navigate the following chapters, they’ll come up against the deadly agents of the Dragon Army, led by the evil Lord Soth (subject of the alternate art cover) who answers to the Dragon Queen.

In these skirmishes, the DM will have the opportunity to let the players battle the Dragon Army via the Warriors of Krynn game, included in the Deluxe Edition of Dragonlance, along with a Dragon war themed DM screen. The prompts in the book tell you what scenario to set up and how they relate to the story. Warriors of Krynn plays like Risk + a scenario-driven story game like Journeys in Middle-Earth or Mansions of Madness. The Heroes move around the board, fighting enemy lieutenants, putting out fires (sometimes literally [there are fire tokens]), and trying to complete objectives.

D&D plus a war-strategy game sounds like a winner, but I don’t know if most people who were planning on playing a TTRPG would like the idea of setting aside their character sheet for a war game; it could seriously kill any flow or enjoyment of the story. As stated above, the book itself would take months (years if you meet infrequently) already, without stopping 12 different times to do war scenarios. The game could be fine by itself, but it’s interesting that it’s only bundled in the deluxe edition.

No matter what version of it you buy, Dragonlance is a sweeping epic that will fill many sessions of fun for a D&D group. Players who favor combat or action set-pieces will find a lot to enjoy here, and while there are a few non-combat interactions, they are fewer to be found. Still, there’s a lot of fun to be had here, and I think most D&D players would enjoy the story and action.

Review copies were provided by the publisher.

A D&D book that puts you on the front lines of the dragon war, and has enough materials to keep a group busy from level 1-10!