In space no one can hear you make 1980's pop-culture references. 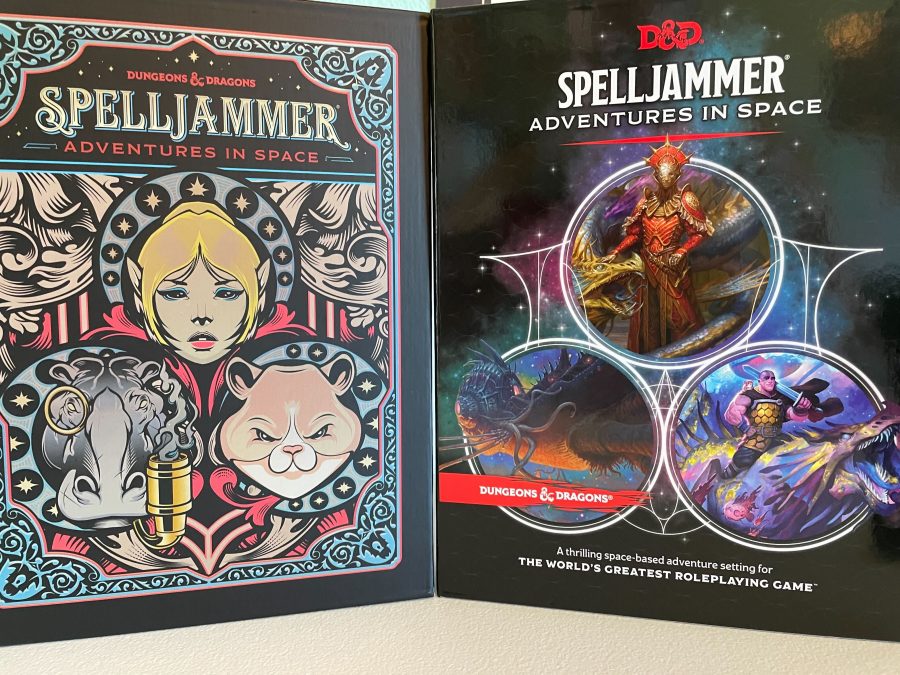 In Spelljammer, D&D players are treated to three separate books that are 64 pages each, all in total making up 192 pages of the game’s setting. The books also come with a nice DM Screen and a fold-out map of one of the game’s major cities. Basically, they broke up the different parts of a usual game book into three, making them easier to share and pass around if need be. The Light of Xaryxis is the adventure module, Astral Adventurer’s Guide does the worldbuilding and explains what Spelljamming is, and Boo’s Astral Menagerie is a space-faring version of the Monster’s Manual. So does this Flash Gordon-inspired set of books bring home the goods, or is it lost and adrift in Doomspace? Read on, adventurer!

Players will potentially encounter vampirates, ghosts, creatures, space dragons, evil clowns, and other difficulties that may be defeated in combat or role-playing encounters. Ships are flown through space with magic-infused helms, piloted by mages. There are also giant space hamsters.

While I was initially confused as to why they would break up the books into three parts instead of just one normal-sized D&D book, it does make it a lot easier for the Dungeon Master to keep the adventure open to the page they are on while letting players reference the Astral Adventurer’s Guide or Boo’s Astral Menagerie if they need a picture to go with the description of a particular foe. And since it clocks in at the usual price for a new D&D book, with the added benefit of a new DM screen full of Astral information and tables, it’s hard to be unhappy with this new setup.

The Astral Adventurer’s Guide has 3 chapters that will be helpful to players old and new to D&D. The first chapter covers new player options, including 2 backgrounds and 6 race options including Astral Elf, Giff, and Plasmoid. There’s also a helpful table right before chapter 1 with 10 different adventure seeds to help get players up to the suggested level 5 to start the Light of Xaryxis adventure. Chapter 2 explains spelljamming rules and statistics, as well as spells and items that may prove useful for explorers of Wildspace. Chapter 3 does a deep-dive on the Rock of Bral, a major city in Wildspace that was built on an asteroid. The city can be a hub for homemade campaigns or side-quests and also features in the LoX adventure. Boo’s Astral Menagerie is, simply put, the Monster Manual in space. The adventure references it several times each chapter, however, so it shouldn’t be ignored.

The Light of Xaryxis campaign puts players into a sweeping epic that takes them to the edges of Wildspace and back again – if they can survive the dangers there! The introduction talks about the structure of the adventure (4 parts of 3 chapters each), its inspiration (1980’s Flash Gordon), and character creation and starting areas. Dungeon Masters will be prompted to level up the player characters at the end of each part of the adventure, taking them from level 5 to 9 by the end. At the end of the introduction it even suggests where to begin the adventure depending on where the party started, but any coastal city or port will work.

From the beginning of the adventure all the way until the players face their final foe, this adventure gives them many different choices, or at least enough of an illusion of choice that a good Dungeon Master will make them feel like they’re in the driver’s seat whether they’re on a straight path or things have gone off into the deep end. It’s a little more work for the DM, but the book provides all the branching paths needed as long as you read the section that applies based on the choices and outcomes that the party came to. In the end it makes for a campaign that feels less like it’s on rails, and more like it’s a winding path with many different side options that all end up in the same place eventually. In my experience the latter kind of campaign is much more enjoyable for the players, as they feel like their choices matter. And the story accounts for even making bad choices, for instance if the party tries to run inland from the crystalline vines instead of joining their new sailor friend at the docks, she brings her boat to them with a well-timed rope ladder.

If you are looking for something like Starfinder but for a D&D setting, Spelljammer should be, well…exactly your jam. It’s a great setting that’s been well fleshed-out by the Astral Adventurer’s Guide and Boo’s Astral Menagerie, and a pulpy-inspired space epic in the Light of Xaryxis that also does a good job of letting the player’s choices matter. I for one look forward to brushing up on my Spelljamming, cranking up the soundtrack to Flash Gordon, and finding a group to play this with as soon as possible.

If you ever wanted a D&D adventure among the stars, Spelljammer is what you've been waiting for.