A Dungeons & Dragons adventure for characters of levels 3-12 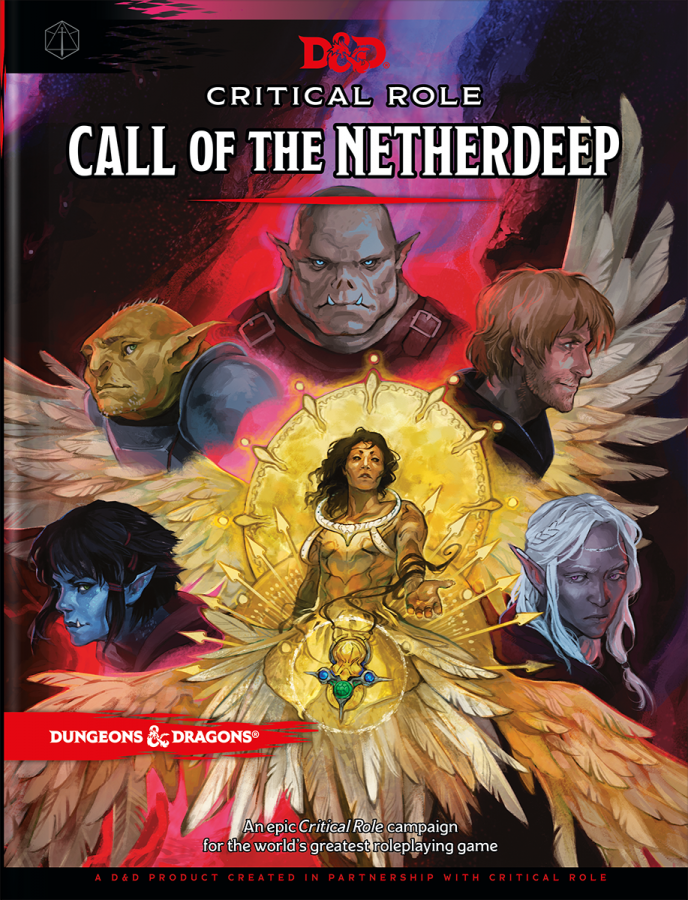 A forgotten champion with a tortured soul; a group of rivals that could turn deadly (or into loyal allies). An entire continent on the brink. Players setting foot in the world of Exandria will be taken on a continent-hopping adventure to find out what’s really happening under the red moon of Ruidus. So is it a rolling good time, or does the Call of the Netherdeep get put on hold? Read on for the review!

Almost all D&D books have some references or major themes of magic, and while this one is no different it also contains something new: corruption. There is a certain item found in the Netherdeep that has a corrupting element, making even the Player Characters break out in rash, sores, or even crystalline protrusions, which is the last step before death. Many of the creatures or characters the Players will run into have been touched by this corruption, and therefore look more grotesque or warped than usual. Players may encounter demons, ghosts, visions, wraiths, and other evil or undead enemies.

Call of the Netherdeep can be run without prior knowledge of Critical Role, or their previous book Explorer’s Guide to Wildemount. Players can either roll up a level 3 character, or bring in a character from another campaign if they wish. The first few pages in the introduction do such a good job of introducing the world of Exandria and its cities and continents that it feels like reading an actual history book. This is a double-edged sword however—if you are not a huge Critical Role fan this section may be your least favorite. After reading through the entire book, this section made a lot more sense and it does do a good job of laying some needed groundwork. Just be prepared for a lot of lore.

The short version is that our forgotten hero was born under a full moon of ill omen. The introduction explains how to roleplay the Apotheon (forgotten hero). It also has an adventure flowchart with expected PC levels, and it explains the rivals’ backgrounds, goals, and motivations. Netherdeep is different in that at different points in the adventure, you will have chances to square off against a rival adventuring party that sees themselves as the heroes. How you act, and whether your past actions cause them to treat you as friendly, indifferent, or as enemies can change a lot about what will happen in each session.

The adventure kicks off with the Festival of Merit in the city of Jigow; players will have the chance to compete in different contests testing strength, constitution, and wits including pie-eating, arm-wrestling, and solving riddles and mazes. At the end of the festival is a final contest, where the party will face off against their rivals in a race through the Emerald Grotto. This race will likely set up how the next few sessions will go, if not the entire adventure. Players will have opportunities to interact with or avoid their competitors, and the Grotto’s watery caves set the tone for how several of the later encounters use water or underwater encounters. Once they finish the race, players will have an encounter with a vision of the Apotheon which will kick off their continent-trotting heroic quest. After the race, players will have another opportunity to interact with their rivals, no matter who wins.

This adventure has something for everyone. Players start off doing some social interactions and non-combat roleplaying, then dive into what is essentially a competitive dungeon. They then go on a road trip, bump into the rivals again, fight some demons, find themselves whisked off to a huge city, join a guild, save a market, and if they play their cards right, rescue the entire continent from a corruption right under their noses. While I struggled to get footing in the first few pages, what comes after is a deep campaign that takes players from level 3 all the way up to 12, and in many places lets them decide major narrative points. While I’m not a huge Critical Role fan, this book made me want to check out their previous offering. If you have the means, I’d suggest picking up Call of the Netherdeep.

Deep in lore from the world of Exandria, there's plenty of gameplay to unpack for CR fans and new D&D players alike. While the former will get more out of it, Netherdeep is a solid book for anyone looking to add to their shelf.