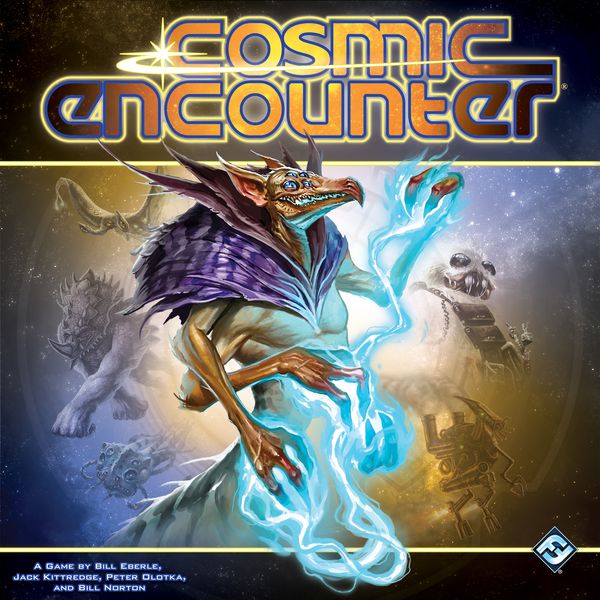 In 1977, a group of sci-fi nerds created Cosmic Encounter, a game about colonizing alien planets. Coming from humble beginnings, the game was popular among a small niche, but over the years, it gained underground acclaim. Four decades, various versions, and numerous expansions later, it is widely considered one of the greatest games of all time.

Cosmic‘s current publisher, Fantasy Flight, has taken the game to new heights, producing a definitive version in 2008. This year, in a self-aware, geek-referential celebration of the game’s 42nd anniversary, they have re-released Cosmic Encounter once again.

At its core, Cosmic Encounter is a pretty simple game. The goal is to establish colonies on five opposing planets (i.e. to have your ships on five planets belonging to other players). This can be done nicely, or… not nicely. Each player begins with 20 ships, distributed evenly among their home planets.

On a player’s turn, she begins by flipping over a card from the Destiny deck. This determines with whom she will have an encounter.

On yellow’s turn, she flips over a red Destiny card. This means she will have an encounter with the red player.

Selecting a planet in that player’s tableau, the active player (the attacker) puts 1-4 of her ships into the encounter. This is the starting strength of her attack. The defending player’s starting strength is the number of his ships on the planet being attacked. For example:

Yellow commits 4 ships to the encounter, and red has 3 ships on the planet. This means the starting strength is 4-3.

From there, the attacking and defending players may invite others to ally with them. Allies can add ships to the encounter, strengthening their respective sides.

Once allies have been chosen, the attacking and defending players each play a card from their hand, face-down. There are two main types of cards: Attack and Negotiate.

When both cards have been chosen, players flip them over simultaneously. Under normal circumstances, there are three possible outcomes:

Outcome 1: If both players play Attack cards, they add their card’s value to the total number of ships on their side, and the side with the higher total wins the encounter. (Ties go to the defender.)

Outcome 2: If both players play Negotiate cards, the two main players have one minute to come to an agreement. Usually, this would be “I put a colony on your planet, and you put a colony on my planet.”

Both active players played Negotiate cards. This means they have one minute to make a deal using cards and/or colonies. (Allied ships are returned to their owners.)

Outcome 3: If one player plays an Attack card and the other plays a Negotiate, the attacking side automatically wins the encounter, but the negotiating player gets to steal a number of cards as compensation.

Since one side played Attack and the other played Negotiate, the attacking side wins the encounter outright. All losing ships go to the Warp, but the losing player gets to steal cards as compensation for his loss.

All players on the losing side of an encounter send their ships to “the Warp,” a central tile that acts as a sort of limbo, where lost ships remain until a card or game effect causes them to be released. While ships are in the Warp, they may not be used in encounters.

Being in the Warp is a bummer. (As a side note, the Warp tile also acts as a score track. Here, we can see that green is currently winning.)

This player-vs-player system of alliances and card-play is the foundational mechanic of the game, but by itself, it’s not terribly interesting. Cosmic Encounter has one key facet that absolutely makes the game: every player has an incredible, mind-blowing, infuriating, hysterical, unique, utterly game-breaking ability.

I realize that in 2018, variable player powers are standard fare, but Cosmic was the first game to use them, and no game since has used them in quite the same way. Unlike most other games where variable powers are simply “Draw one extra card” or “Gain one extra resource,” Cosmic takes it to the extreme. Every single alien race fundamentally changes the way players have to think about the game. For instance:

With over fifty races in the base game, there are an unfathomable amount of possible combinations. (They weren’t lying when they called it “A game of infinite possibilities.”) What may be even more amazing, though, is just how balanced it is, despite every power being outlandishly broken. Cosmic Encounter has a system of checks-and-balances that keeps every power equally strong, albeit completely asymmetric. Basically, everyone is overpowered, so no one is.

In the four decades since Cosmic Encounter was created, the industry has seen unprecedented changes. Tens of thousands of games have been released amid a boom, the likes of which the hobby has never experienced before. However, despite all these developments and accomplishments, I truly believe that the pinnacle of game design was reached in 1977. Don’t get me wrong, a staggering amount of great games have come out since then, but I cannot think of a single one that has surpassed the pure genius of Cosmic Encounter.

If you enjoy hobby games, odds are you have lots of stories of “that one” game—that against-all-odds comeback, that natural 20 at the most dire moment, or that perfectly-timed action to reveal yourself as a Cylon. Epic gaming moments stick with us long after we close the box, and Cosmic Encounter is responsible for more unforgettable moments than any other game I’ve ever played. I simply cannot do it justice in a review; you have to experience it for yourself.

If you’ve never played this game, the 42nd Anniversary Edition is a great jumping-on point. This new version features 51 alien races (including one all-new), sweet translucent ships, and a number of pre-made power combinations. The quick-start rulebook is conveyed in a cool comic-book style, which appeals to my other nerdy passion. The box comes with plenty of room for expansions, because trust me, you’ll want them.

There is a reason this game has remained so popular. A sure sign of a good hobby game is longevity—are people still playing it a decade later? Two decades later? Is the game still gaining new fans? Cosmic Encounter is timeless. Simply put, it’s gaming perfection.