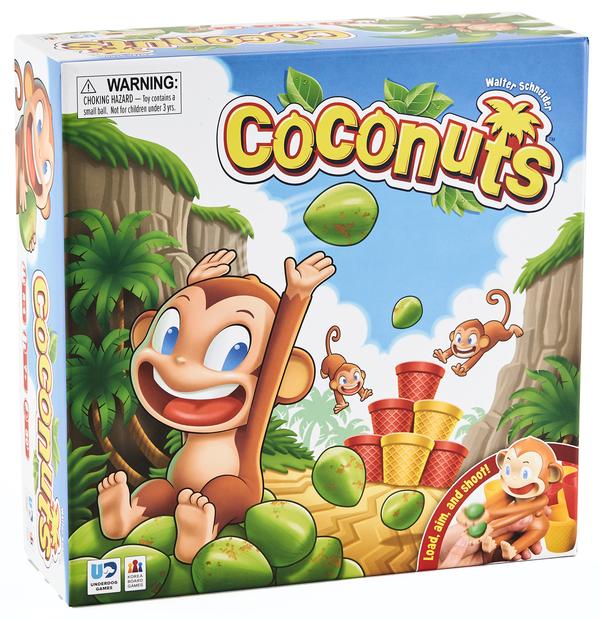 Coconuts is a really easy to recommend game. Do you like fun? Do you wish more kids games were ones you wanted to play with even after your children/nieces and nephews/friend’s kids have gone to bed? Let me put it this way: I would rather play a thousand games of Coconuts than ever play Candyland or Chutes and Ladders ever again.

There’s a warning on the box, but just to state it here: the coconuts themselves are squishy and bite-sized for kids. If your little ones might put them in their mouths, keep a close eye on them or wait a year or so on this game. The age on the box is 7+, but I was able to play with a 4 year old under supervision.

Setup for a 3 player game.

Coconuts is a pretty complicated for a kids game, are you ready? On your turn you put a coconut in your monkey’s spring-loaded hands, pull it down, and try to shoot the coconut into a nearby cup. If it lands in a cup you get to keep it. If that cup is red you get to go again. You can steal other player’s cups, and the first person to stack 6 cups up in a pyramid is the winner. I told you it was complicated, and yes I was joking.

When you score a cup, you place it in your play area on one of the tree stumps.

The game is also aided by the fact that your shot never quite always goes where you intend it to, which flattens the strategy curve. The oblong shape and rubber material of the coconuts ensures that even if you’re on target, your projectile may wobble, bounce, or careen off course, much to the delight of everyone at the table under 10 years old. There were even several times in my plays that a shot missed entirely, only to wildly bounce back into play and often landed inside a cup. The playing field in Coconuts is intentionally set up so that everyone is shooting inward, and other player’s cups are on the edge of the field of play. This keeps things interesting but also makes it so younger monkeys don’t have to try so hard to aim.

Speaking of monkeys: the ones included in the game are great fun. They have springy arms, and happy smiling faces that remind me of Super Monkey Ball. You do however need to hold on to their legs or back so that the spring-loaded arms don’t cause them to flip or shoot their ammo straight into the air. This happened more than once with my four-year-old opponent. However with some encouragement and hand-positioning coaching, she ended up winning as often as I did, which I thought was impressive.

Family-friendly or kid-focused games are a tricky tightrope. Too hard and kids won’t have fun, but too simple or easy and there’s no replay value. Coconuts manages to be extremely easy to set up and play, while also enjoying a high replayability thanks to the components that both fit with the game and make it fun. If you are looking for a good grade-school-friendly game that adults can enjoy too, check out Coconuts.

If you want a fun, light game with near-zero setup that adults will keep playing after kids have gone to bed, check out Coconuts.