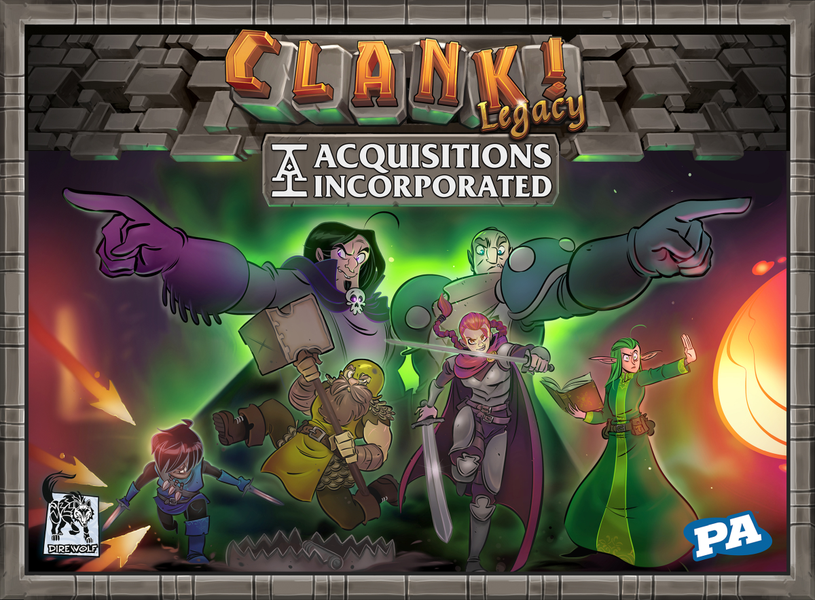 The Clank! series of games has players building up a deck of cards while delving into a map full of dangers, secrets, treasure, dragons, and monsters. Each version features a dungeon or overworld that players must navigate and push their luck while also adding new and better cards to their starting deck. Clank! Legacy: Acquisitions Incorporated has players exploring a new map and story featuring elements from Penny Arcade’s Dungeons & Dragons live-action games from various PAX conventions. Prior knowledge of the Acq. Inc. troupe is not necessary, but will be a plus for fans of their exploits. Spoilers will be kept to an absolute minimum, but read on to see how this Legacy version of Clank! stacks up.

Players will be dealing with many fantasy staples, including evil monsters, magic, and otherworldly beings. Cultists, witches, vampires, dragons, possessed peoples, and alternate religions may also be encountered.

Clank! Legacy is dripping with story from the moment you open the box. Having played the original Clank!, most of the expansions, and Clank! In! Space!, I can definitively say that Legacy is my favorite. Not only are you experiencing the story as it unravels and creating a custom game board, but you also get to personalize your characters, watching them  improve as the game progresses and giving them even more agency and buy-in to the story elements.

Anyone who has played a story-driven game with a large book will be familiar with how the narrative elements are doled out; as players reach spots on the board or are directed via cards or other game elements, a number inside a book symbol will tell them what to read next to advance the story. Sometimes the text will trigger events such as altering the board, adding or removing cards/items, or receiving rewards or consequences. Because of this, a player’s turn can take a few minutes as the legacy elements are being added or distributed. In my experience, even two-player games can take 90-120 minutes – I could see a four-player game taking over two hours easily.

The game comes with a gold mine of content to discover, and it does a good job of drip-feeding it into the experience. It has hidden sticker sheets A through M, an entire deck of cards to access that is twice the size of the starting adventure deck, and dozens of new gameplay elements that are added slowly enough that they are not overwhelming. If someone were to jump in to a completed Clank! Legacy game, it could be a lot to take in, but if they start at game one, it should not be an issue.

There are several blank rules on multiple pages when you first crack it open. You’ll add these slowly to incorporate new elements into the game.

One thing to note, for both this game and any other legacy game: read the WHOLE thing when the game instructs you to make changes. I ran into an instance in my play where I could not find the space it instructed me to update, and it turned out to be 100% my fault for not reading the instructions carefully. Also I would advise the most precise among your gaming table to place new locations on the board: there is a small amount of wiggle room but if you want the pathways to line up perfectly you’ll need to be accurate.

This will happen a LOT.

This version of Clank! is a great jump-on point for both new and veteran players, since it brings so much to the table but does so gradually; each new story only introduces one or two elements, so even if you miss an occasional game in the 10+ story run you won’t be left out in the cold. The MSRP point of $100 will be a barrier for some budget-minded players, but if you can wait until it drops below $75 I would argue that it’s worth it. I just wonder if my original Clank! will gather dust since you can play Clank! Legacy as a standard game once the story has concluded. That’s probably my biggest gripe on this game and the series as a whole – each time they come out with a new game or expansion it doesn’t seem to play well with anything before it. Clank! Legacy does mention you can incorporate the original Clank! cards, but only after the story is completed.

The minis are highly detailed and a welcome upgrade from the meeples in original Clank!

Clank! Legacy has hooked me; it was easily my most-played game over the Christmas holiday. If you like the push-your-luck deckbuilding style that Clank! has to offer, Legacy will be in your wheelhouse. Personally, I’m really enjoying it but I would not have been able to spring for it at the full MSRP. However, I love that you can play it after the story is done, and hope that more legacy titles follow suit (like Machi Koro Legacy). If you have the means, especially on a sale price, I would highly recommend Clank! Legacy.