Save the Kingdom from The Beast! 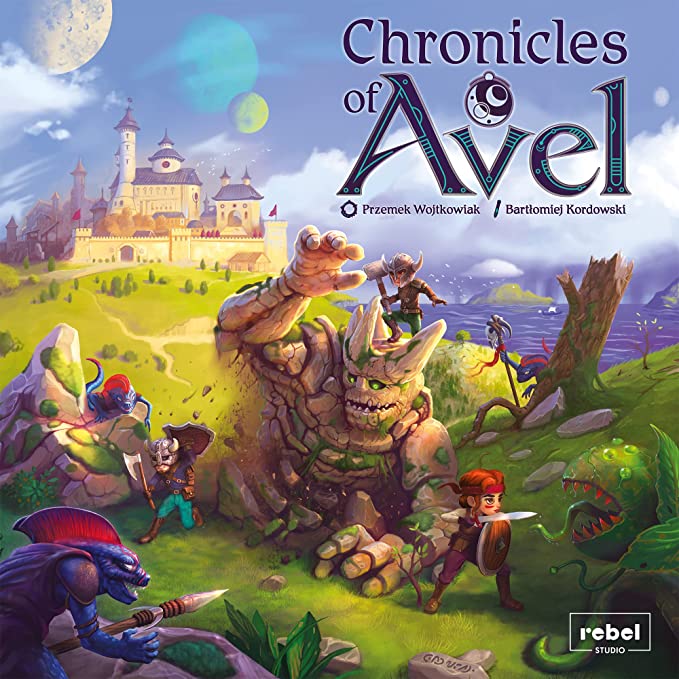 In Chronicles of Avel, players work together to protect the kingdom of Avel from the Beast. Players will explore Avel, level their items up, and set traps to prepare for the Beast’s attack!

To begin, players will choose a male or female template and create their character. Players can draw and color on their characters sheets to personalize their hero, which is a nice role-playing touch. Next, all players will draw an item from the item bag. Once the game board is set up, you’re ready to go!

The ultimate goal of Chronicles of Avel is to defeat all the monsters once the Beast shows up. In order to do that, players will use their turns to explore the map, close monster spawners, set up traps for the Beast, and build walls for the castle of Avel.

Players will choose 2 of the 4 available actions on their turns: move, rest, fight, and interact with an explored hex. Different hexes allow for different options, whether that’s offering monsters to defeat, a way to earn coins, or a way to spend coins. Other than the traps, monster spawner closers, and walls for the castle, players will want to use their coins to purchase new items or flip their current items to their more powerful side.

The items in Chronicles of Avel, such as helmets, swords, shields, and potions, allow players to roll additional dice in combat. Combat is simplistic while still capturing the fun of differentiated dice-rolling. Players will roll their dice and the monster they’re fighting’s dice at the same time and determine how much damage each fighter received. Defeated monsters often grant rewards such as new items, coins, or allowing a player to upgrade their item. If a player loses all their health, they become stunned and lose all their items but 1 (including coins) and return to the castle at full health, thanks to the healing powers of the Healing Jewel.

The player boards are epic. They hold your character sheet in place perfectly, there are slots to place your equipped helmet, sword, and shield, as well as a backpack-shaped slot to put the rest of your equipment and coins. Characters’ equipment load is simple: as long as you can fit the items and coins you’re carrying in your backpack (flush, no stacking), you can keep them. This often leads to a couple of spatial minigames where a player with a couple items and coins tries to reorganize their backpack so everything fits.

Chronicles of Avel advertizes exploration as a key gameplay mechanic, and I suppose it’s fun revealing tiles and seeing where each tile is, but you use all the same tiles for each game. The exploration fun could have been enhanced by including more tiles than necessary, then having players shuffle in a random number of them so each time it’s surprising.

On higher difficulty levels, Chronicles of Avel becomes more mechanical and less thematic. For instance, there’s no real urgency to fight monsters before the Beast comes because they don’t move and they’ll respawn. It’s important to fight some of them for the rewards they offer, but there’s not any urgency until the Beast arrives. This is fine, but it would have been better for there to have been some sort of tension between fighting monsters and preparing for The Beast in the beginning of the game. As the game stands, players can maximize everything and prepare for the endgame without worrying much about monsters.

When the endgame does come, Chronicles of Avel becomes a short tower-defense game. The endgame is rarely more than 20-30% of the overall gameplay, and it’s often a slugfest of running around Avel and defeating monsters before they breach Avel’s walls. It’s fun, although The Beast can be especially tough to land hits on. Don’t be fooled by Chronicles of Avel’s cute artwork: this game can be tough. It certainly gets a bit easier with 4 players, but at 1, 2, and 3 it can be quite difficult on even the moderate difficulty.

The components here are really good. The tokens and monsters are tactile, which is especially important for a family game, and the excellent artwork has some fun fantasy creatures, enhanced by their descriptions in the bestiary. The player boards steal the show though. Everything works so well that I can’t help but wish for something like this in other games.

Something Chronicles of Avel does better than many other games is world-building. It’s not essential reading, but the game includes a 2-page short story describing the events leading up to Avel preparing for The Beast’s coming. There are also 5 pages of whimsical descriptions of all the monsters of Avel and a character-naming guide in the form of a star chart with dice icons for randomly-generated names. The lore here is fantastic, even if hardly any of it manifests in the gameplay. However, this depth of lore does allow for more role-playing possibilities for characters, which can make the game more enjoyable.

If you’re looking for a light-hearted fantasy adventure with solid game mechanics and some tower defense, Chronicles of Avel nails it. Some concepts may be difficult for younger players to grasp (the closing of monster spawns particularly), but I can see savvy 8-10 year-olds picking this one up just fine. The lore is wonderful and leaves room for some solid role-playing opportunities, but I wish it manifested itself in the gameplay more. The components and relatively short playtime (45 minutes for experienced players) make up for it though.

An excellent introduction to fantasy-themed cooperation for families.