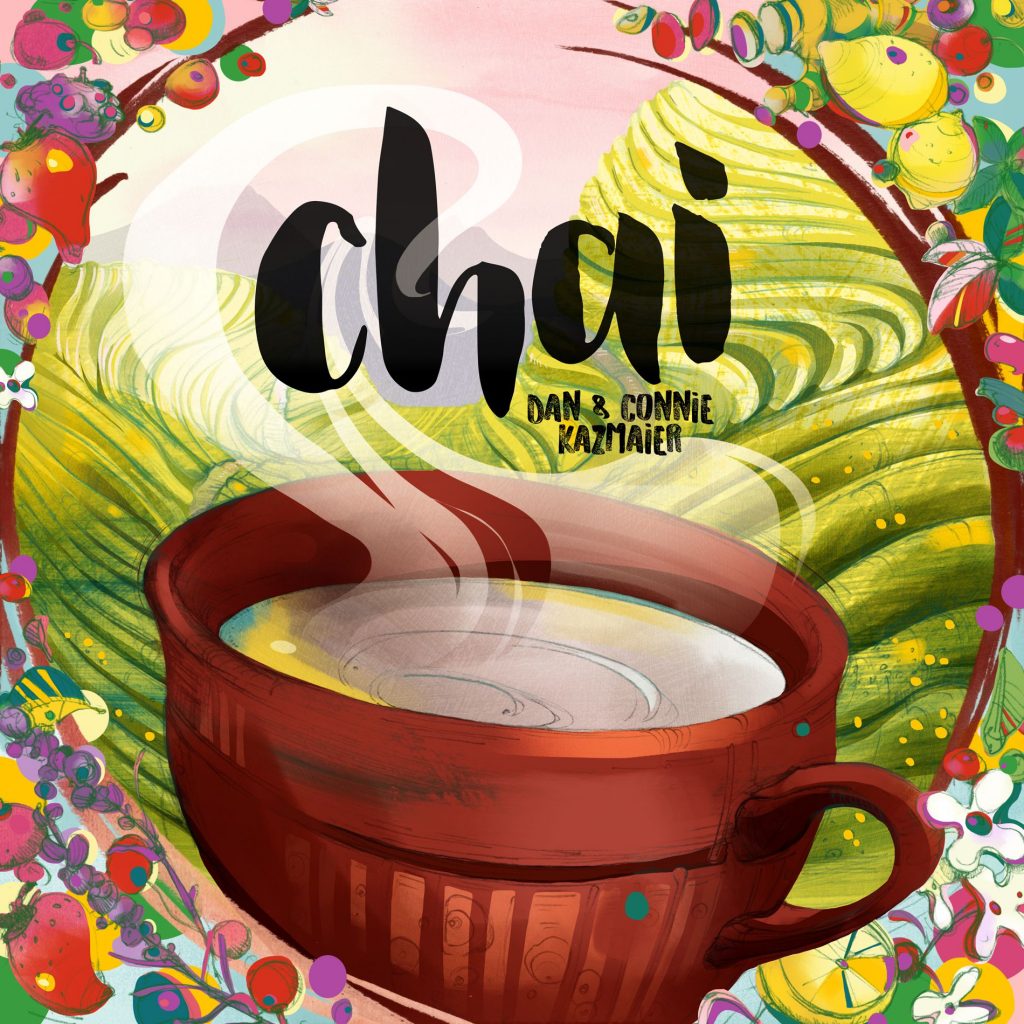 Chai is a family game about making tea. In this game, players collect various flavors and pantry items to brew different types of tea, which they can sell to customers for points. It is an enjoyable family game which feels inspired by other lightweight games like Splendor and Century: Spice Road.

Chai is the first release from Steeped Games, a husband-and-wife designer/publisher team. In this game, players are tea merchants attempting to earn the most points by crafting the most delicious drinks.

At the start of the game, each player receives a tableau board and a customer card in their color. An additional customer of each color is dealt face-up to the center, to create a card market. The starting player takes $1, and all other players take $2.

Each customer shows a set of items that must be collected to fulfill their order, as well as a point value for completing it. The remaining customers are shuffled together to form a deck, and from this deck, 2 more cards are added to the card market.

This last action is the most interesting part of Chai. In the central play area is a board containing spots for 3 rows of randomly-drawn tiles.

As indicated on the board, the tiles in the leftmost column cost $1 each, those in the next 2 columns cost $2 each, and those in the last 3 columns cost $3 each. The catch, however, is that if multiple tiles of the same color are adjacent to each other horizontally or vertically, they can all be bought together for the price of a single tile. Put another way, tiles in a “clump” can all be purchased for the price of 1 of them (the most expensive tile, if it matters). Continuing the example above:

This market mechanism provides a sort of spatial mini-puzzle, reminiscent of games like Potion Explosion or Candy Crush.

All ingredients necessary to fulfill this order.

When a player has collected all the ingredients necessary to fill an order, she can do so in addition to her regular action. Each player has a number of wooden tea tokens in their color, and whenever a customer’s order is fulfilled, a tea token must be spent matching the color of the customer card. If the customer color matches an opponent’s player color, the active player must pay that opponent $1.

The tea token and all ingredients used are then placed in one of the cups and the player reveals the tip token in front of the cup, earning its bonus.

The round ends when all tip tokens have been revealed – that is, when a number of orders have been filled equal to the number of cups/players. At the end of the 5th round, the game ends, and players total up their scores based on fulfilled orders and leftover money. The player with the most points wins!

Right out of the box, Chai looks fun. I should note that the components shown come from the deluxe version, which includes metal coins, fancy cups, and extra components, but the whole presentation looks amazing. The card art is delightful, showing a beautifully diverse cast ranging from Alice in Wonderland caricatures to a Captain Picard lookalike (who we can assume drinks earl grey).

Chai‘s game systems are simple and easy to understand, with intuitive iconography and helpful player aids. The overall game length is about 10 minutes per player, which feels just right. The market system is easily the coolest part of the game, and it serves to distinguish Chai from other, similar family games.

The tea theme not only works well, but it comes through surprisingly strongly. This is due in large part to the lovely components; the tiles bear images of the ingredients they represent, so it actually feels like players are combining different spices and flavors to make delicious drinks, even literally pouring them into a cup. Of course, the teacups themselves absolutely steal the show, providing functional, visual, tactile, and thematic effect.

While I enjoyed Chai overall, I found the wooden tea token mechanism strange. Putting an artificial limitation on the amount/type of orders that can be filled seems extraneous, and I don’t really see what it adds to the game. (To be honest, I don’t think the customer cards needed to be colored at all.) I realize the tea tokens provide a way for money to move around, but in the long run, the money tends to come and go roughly equally for all players, which makes it feel unimportant. Now, there is a variant in which the tea tokens can earn players some extra points at the end of the game, but a few optional bonus points do not seem to warrant an entire extra mechanism. This tea token rule is hardly a major issue – it’s certainly not game-breaking or anything – but it just seems like an odd design decision.

That said, Chai is still a smooth-playing experience. It feels like it draws inspiration from games like Splendor and Century: Spice Road, and for this reason, I think it will appeal to folks that like that style of game. It scales well, adjusting the number of customer cards and cups/tip tokens according to the number of players, and it also offers solo and co-op modes, which give it a little more variability.

If the tea theme or light, family-style gameplay catch your eye, then this cup of Chai might be worth a taste.

A review copy was generously provided by Steeped Games for the cost of shipping.

Chai is a nice game with a gorgeous table presence. It has one mechanism that seems a little out of place, but it is bolstered by a strong theme and a super cool resource purchasing system.