Review: Cerebria: The Inside World 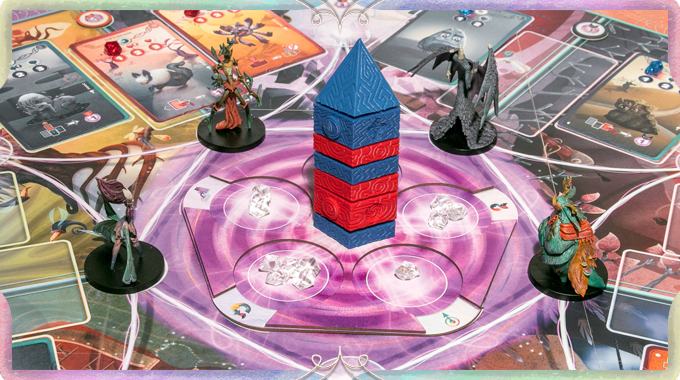 Cerebria: The Inside World is a massive and complex team-based game where players attempt to control the mind by playing schemes and establishing fortresses with emotions.

Mindclash Games is a publisher well known for complex strategy games with many options and lots of engine building. Cerebria follows suit in games such as Trickerion and Anachrony.

Players play on one of two teams with one team controlling “good” emotions, and the other controlling “bad” emotions. This is pretty vague and provides no gray area, but if you have issues playing as the “bad guys” Cerebria might not be for you. The artwork is sometimes cutesy, and many times abstracted and creepy. Check out the artwork via photos on BGG if you want to see more examples.

Cerebria is weird for three reasons. I hope that once I’ve laid them out, you’ll know exactly whether or not it’s for you.

I don’t want to get bogged down by all of the interacting systems of Cerebria because if I did, I’d be writing 4,000 words to do so. As such, I’ll let the reasons speak for themselves.

Reason One: It’s from Mindclash Games

I suspect that a minority of tabletop gamers have heard of Mindclash Games, or at least heard of Trickerion or Anachrony. Despite having pretty big and successful Kickstarters, their games are popular among a very particular subset of hobby gamers.

Mindclash doesn’t do games you can learn and master after two plays. Mindclash does games that need played 3-5 times to grasp, then need played another time to understand. Once you understand a Mindclash game, only then should you flip over all the tiles and boards and tokens. That’s when the game opens up, because on the backside of all that cardboard and cardstock is a brand new game: the B-sides.

If you’ve played the platformer video game Celeste, your first run through the game is simple. It’s the A-sides. It can be challenging at times, but once you get the hang of it, you get it, and you like it. Then, the B-sides take all those levels and remix them. Now it’s really tough. Rooms that used to be easy to get across now provide many more ways to die, and you have to use your brain to figure out new ways to plan and execute.

B-sides in Mindclash titles like Cerebria are the same. Now each player’s faction doesn’t have the same ability, it’s tweaked. A brand new deck of emotion cards is added to the game. Everyone has a different upgrade track. New end-game goals are revealed.

Everything you thought you knew about the game is completely different. This means gobs and gobs of replayability, but it also means you need to devote yourself to enjoy the full experience of a Mindclash game.

Reason Two: Cerebria is like the Pixar film Inside Out, but weirder

Seriously, take one look at a still from Inside Out and compare to the Spirits of Cerebria. It’s like Guillermo Del Toro and Tim Burton collaborated to make a darker, more twisted version of those cutesy emotions Pixar created.

In a world where we’ve a hundred games about colonization to play, and even more games featuring Europeans sailing the seas and trading resources, Mindclash continues to provide odd themes that break the mold of the normal.

In each game of Cerebria, players work with their teammate to plot control of the mind. Team Gloom will damage and infest the board, while Team Bliss will dump gladness and joy everywhere to maintain control. Yes, literally you are playing emotions into this person’s mind.

Constantly in Cerebria, you’ll be stepping a few feet away from the table to discuss strategy. It’s common to hear someone say something like, “we need to get the fortress played now so we can use Anxiety to take realm control.” And it’s even more common to see emotions like optimism and bleakness fight for control of various locations.

The interesting thing about all of these interactions is that they probably won’t manifest in a particular meaningful way until the next few players take their turns. Oh, now’s a good time to tell you players take their turns back and forth between teams. So one player from Gloom takes their entire turn, then a Bliss player, then Gloom, then Bliss, etc.

In many ways, Cerebria almost behaves more like a programming game, where you prepare for your teammates turn, which is still 6+ actions away from your 3-4 actions. This means teams who plan ahead from the start of the game will be most rewarded and will likely walk away with the victory.

So, I hope this is helpful for you as you decide whether you’d like Cerebria or not.

I’m personally not a big team or cooperative gamer, but I can appreciate everything Mindclash is doing with Cerebria. It continues the publisher’s trend of pumping out big games that support themselves with lots of variability. And it’s not meaningless either. Some games have meaningless replayability, but Mindclash gives you reasons to come back. Every. Single. Time.

A review copy was provided by Mindclash Games.